DOM Physicians, Investigators Prolific with Published Papers around the Globe in 2016 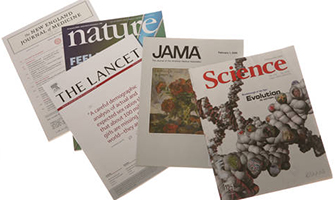 Physicians, investigators and students within the University of Arizona Department of Medicine and its associated centers and institutes have been more than prolific in the second half of 2016.

Below you’ll find a compilation of articles by some of our staff—100 in all—going back to last summer (as of May 2016). If you see any missing, feel free to forward a message to DOM Communications Coordinator David Mogollón for inclusion.

These were compiled from the website, ResearchGate.net (please note, names and titles—or lack thereof—listed largely as given by the publication).

“Relationship between physician and patient assessment of performance status and survival in a large cohort of patients with haematologic malignancies”
Multiple authors including Michael A. Liu, MD
British Journal of Cancer 115(7) · August 2016

“Use and interest in complementary and alternative medicine among college students seeking healthcare at a university campus student health center”
Multiple authors including Michael A. Liu, MD
Complementary Therapies in Clinical Practice 24 · June 2016

“Transition from Parenteral to Oral Treprostinil in Pulmonary Arterial Hypertension”
Multiple authors including Franz Rischard, DO
The Journal of Heart and Lung Transplantation · June 2016

“Safety and Use of Anticoagulation After Aortic Valve Replacement With Bioprostheses: A Meta-Analysis”
Multiple authors including Irbaz B. Riaz, MD
Circulation: Cardiovascular Quality and Outcomes 9(3) · May 2016

“Epidural Corticosteroid Injections for Radiculopathy and Spinal Stenosis: A Systematic Review and Meta-analysis”
Multiple authors including Irbaz B. Riaz, MD
Annals of Internal Medicine 164(9):634 · May 2016