Dr. Francisco García Is College of Medicine Alumnus of the Year 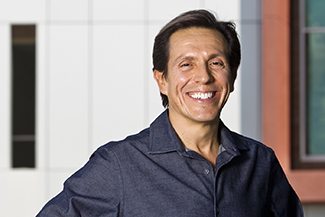 Francisco García, MD, PhD, postponed his second year of medical school to research the link between diet and breast cancer with senior researchers at the UA Cancer Center.

He spent the summer of 1989 doing research at the Johns Hopkins University School of Hygiene and Public Health, then returned to the UA College of Medicine – Tucson to finish his last three years of medical school.

His interest as a first-year medical student in cancer prevention and women's health was an early glimpse of his work in the fields in which his contributions are now nationally and internationally recognized.

Today, Dr. García, a 1992 graduate of the UA College of Medicine – Tucson, is director and chief medical officer of the Pima County Health Department, a role he assumed in January 2013. His responsibilities include overseeing restaurant and swimming pool inspections, tuberculosis and HIV testing, immunizations, family planning, the Pima Animal Care Center and crisis situations such as last year's outbreak of pertussis in an east-side school district.

And his public health work extends far beyond Pima County. In 2013, he was appointed to the U.S. Preventive Services Task Force; the Institute of Medicine (now the National Academy of Medicine) roundtable on health equity and health disparities; and the World Health Organization's cervical cancer control and sexually transmitted disease working groups. In October 2014, he was appointed by Arizona Gov. Jan Brewer to the Council on Infectious Disease Preparedness and Response, and was instrumental in developing a statewide plan to respond to highly infectious diseases such as Ebola.

For all of this, García has been named the UA College of Medicine – Tucson's Alumnus of the Year.

"It is wonderful to receive this honor from the UA College of Medicine, which has already given me so much," García said. "I will always be grateful to the faculty who encouraged me to pursue my goals."

Dr. Charles B. Cairns, interim dean of the College of Medicine, said: "It's really a privilege to honor Dr. Francisco García as our Alumnus of the Year. Since his first year in medical school, he has been tackling the big questions about women’s cancer prevention, health care disparities and population health in general. We applaud his achievements and are proud that he is one of our outstanding alumni."

After graduating from Salpointe High School in 1983, García enrolled at the UA, where he would become the first in his family to get a college degree: a bachelor's degree in psychology.

In July 1987, he began studies at the UA College of Medicine, where he took part in the longstanding Medical Student Research Program. In 2010, in an Arizona Health Sciences Library exhibit about the program, García was highlighted for his participation as a student who became "a young star on the faculty who has received high praise for his teaching, patient care and successive federal and non-federal research awards for developing new methods for rapid cervical cancer screening focusing on underrepresented populations in Arizona, the United States and throughout Latin America."

García's career interest in women's health initially was inspired by his mother. Yolanda García, now retired, devoted decades to working as a promotora – a community health and outreach worker – in the cities of Nogales in Sonora and Arizona, and in Tucson, where much of her service was with the St. Elizabeth of Hungary clinic and the UA's Mobile Health Program.

He started medical school knowing he wanted to specialize in obstetrics and gynecology. At the UA College of Medicine's Match Day in 1992, he got exactly what he wanted: a four-year residency with the UA Department of Obstetrics and Gynecology, where he was elected chief resident.

After completing his residency in 1996, he returned to Johns Hopkins, where he was granted a research fellowship in women's reproductive health. While there, he took advantage of the faculty tuition discount and earned a master's in public health, focusing on health policy and management.

Since becoming director of the Pima County Health Department in January 2013, García has gradually stepped down from his roles at the UA, but he continues research as a Distinguished Outreach Professor of Public Health.

As College of Medicine Alumnus of the Year, García was keynote speaker for the Class of 2019 White Coat ceremony in August. He also will be one of the speakers in Friday's continuing medical education course: "Innovative Medicine: New Approaches to Old Challenges," which is offered annually during reunion and Homecoming weekend.

His talk – titled "Comprehensive Cervical Cancer Prevention: Clinically, Are We There Yet?" – is intended to inform physicians and other providers about the epidemiological bases for cervical cancer screening and HPV vaccination, both of which are underutilized in this country.

As one who has championed women's cancer prevention for nearly 30 years, García did not hesitate when asked what his take-home message will be:

"We have the tools to prevent cervical cancer deaths," he said. "Let's use them."