See ‘Passing On’ Before AZPM Film Airs Nationally on PBS

Thoughtful broadcast on importance of end-of-life planning tells touching patient, family, physician and medcal student perspectives on our final days and how best to plan for them. It premiered locally on PBS 6 in February and can be viewed online…

In case you missed its Feb. 22 premiere, you can still catch the Arizona Public Media documentary, “Passing On,” which features the UA Division of Geriatrics, General Internal Medicine and Palliative Medicine. Its focus is to encourage a thoughtful dialogue about end-of-life issues and the need to have critical conversations about one’s wishes for their final days.

The broadcast—set to air nationally on PBS stations later this year—was produced by AZPM’s award-winning producer Tom Kleespie and narrated by NPR Weekend Edition host Scott Simon. It was among PBS 6’s top 10 most viewed programs in February, a first for an AZPM original production. AZPM also hosted three post-broadcast community workshops to share information about planning for end of life. 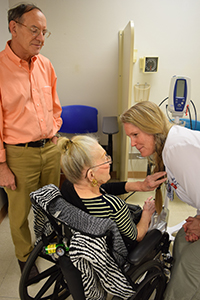 "It was a great experience,” said division chief Mindy Fain, MD (pictured above left). “The film crew went on house calls with Dr. Monica Vandivort (pictured right), did interviews with medical students about the Arnold P. Gold Foundation Living Will Project, which we won a grant to support, and spoke with us about palliative medicine and end of life care.

The goal of the two-year-old grant from the Arnold P. Gold Foundation, Dr. Fain added, is to equip new physicians with the skills to comfortably guide patients and families in end-of-life conversations. It starts with having all medical students write a Living Will at the start of their medical school training, and then to engage in structured reflections, seminars, societies sessions and panel discussions at several times over the next four years. “The Project helps train the next generation of physicians to engage their patients and families in meaningful advance care planning discussions, and deliver compassionate care consistent with their goals and values,” she said. Instrumental supporters included Banner – University Medicine Chief Medical Officer Andy Theodorou, MD, Francisco Moreno, MD, and medical student Cara Levin, of the Gold Humanism Honor Society’s local chapter.

The film, its trailer and end-of-life resources can be found at: http://passing-on.org/