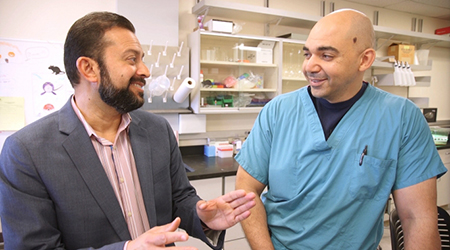 Mohab M. Ibrahim, MD, PhD, is a University of Arizona assistant professor of anesthesiology and pharmacology and is director of the Comprehensive Pain Management Clinic at Banner – University Medical Center South, which is staffed by pain-fellowship-trained anesthesiologists and specializes in non-opioid medical management and intervention to manage chronic pain. Lately, Ibrahim and his colleagues have been considering how exposure to green LED can mitigate pain in both rats and humans.

Staff at Lo Que Pasa, the UA-@-Work e-newsletter, talked with the anesthesiologist, who spoke March 1 as keynote for the Living Healthy With Arthritis lecture series hosted by the UA Arthritis Center and Division of Rheumatology, about why he chose the career he did, what brought him to the UA, and why alternatives to traditional pain management are more important than ever.

How did you come to find yourself in Arizona?

I first came to the United States back in 1993. I came from Egypt. At the time, I had a brother in New Jersey and a brother in Arizona. I loved New Jersey. I stayed for a couple of months. There were apple trees everywhere. Everywhere. You could just walk over to a tree and pick an apple. I love green areas, and I love being close to a body of water. But when the cold rolled in, it was too cold for me. So, I figured I'd go to Arizona. The weather is similar to Egypt, but it rains a whole lot more in Tucson, which I love.

What did you do after your arrival here?

I enrolled at Pima Community College. Then, I transferred to the UA. I majored in biochemistry with a minor in mathematics and Near Eastern studies. I got accepted to the Undergraduate Biology Research Program, and they gave me a list of UA faculty and the research they do. I was reading all these fancy descriptions and had no idea what they meant until I came to a description by the UA Department of Pharmacology’s Philip Malan, MD, PhD, and it said, "studies pain and methods to treat it." I thought, "Wow, I understand that!" and I had an interest in pain. When I interviewed with Dr. Malan, he sat next to me, not behind his desk. He was so humble, but he could explain the most complex topics to people without a scientific background so that they understood what he was saying. Phil was a major factor in my life, and he still is. He still helps me with my grants. He still guides me with my research. I consider him my family. While working with Phil, I really became interested in learning more about pain. I told Phil that I wanted to follow in his footsteps and go to medical school, and he said, "Medical school isn't going anywhere – why don't you study more here. Try the master's program. It's only two years." I started producing data, started getting grants, and I started liking the concept of research and getting to know more, not just reading what other people did. Along with Phil, I also sought guidance and mentoring from some of the best people in the field of pain. Frank Porreca, PhD (professor of pharmacology) has been instrumental in my growth. Todd Vanderah, PhD (head of the pharmacology department) always supports me. Rajesh Khanna, PhD (associate professor of pharmacology, neuroscience and anesthesiology) has been nothing less than wonderful in his active collaboration and mentoring.

So, after you got your master's degree and Ph.D. in pharmacology and toxicology at the UA and then went to medical school here, you became an anesthesiologist. Why did you choose anesthesiology as a specialty?

You mentioned that you had an interest in pain even before your worked with Philip Malan. What sparked that interest?

In 1990, my mother and I were in Kuwait, during the initial invasion by Saddam Hussein. We wanted to escape back to Egypt. It was a horrendous time. Saudi Arabia's borders were shut, and the only way to escape was to go through Iraq. We were on a bus trying to leave, and there was a woman traveling with us. I think she had some kind of cancer. And, of course, there was no medication, no care. Hospitals were closed. Apparently, the woman ran out of her meds. At least that's what I gathered. Her pain was so severe she was crying during the entire trip. She was begging for people to end her life. Of course, no one would think about doing that. People gave her aspirin, but nothing worked. We took turns taking care of her, just holding her hand. There was nothing else we could do. She literally died from the pain. It was a traumatic death. It stays with you. It got filed in the back of my head. So, I always wanted to do something with pain, find ways to manage it or try to understand it.

When should people consider visiting a pain clinic?

If you have moderate pain, you can see your primary care physician first. They have a lot of tools like physical therapy or nonsteroidal anti-inflammatory drugs, or NSAIDS, and if that doesn't take care of the pain, then it's probably time to come see us. We encourage primary care physicians and other physicians to use the pain clinic before staring chronic opioids because there could be something else we could do to help the patient before the physician prescribes opioids. Depending on the type of pain, we tailor a plan.

You and your collaborators have found that green LED can mitigate chronic pain in both rats and humans. What's next?

We're starting to investigate the biological mechanisms that allow green LED to alleviate chronic pain (see link to article below). Studies have shown that green light increases the levels of circulating endogenous opioids (which are produced by the body), which may explain the pain-relieving effects. We're now conducting a clinical trial using green LED therapy in people with fibromyalgia, a common source of chronic pain. The hope is that green LED light therapy will alleviate the participants' pain when used alone or in combination with other treatments including physical therapy or low-dose analgesics. We are also exploring more applications and indications for the green light therapy in animals and humans.

IN OTHER UA-@-WORK NEWS:
“Pillars of Excellence Ceremony Honors Faculty and Students” | April 12, 2017