Launched in 2000 as the University of Arizona Liver Research Institute, this facility was renamed in 2017 as the UA Thomas D. Boyer Liver Institute in honor of its founding director, Thomas D. Boyer, MD. Its creation with funding from the Arizona Legislature coincided with the arrival of Dr. Boyer at the University of Arizona. The institute is dedicated to better understanding the causes of and ways to prevent and treat liver disease and related disorders. 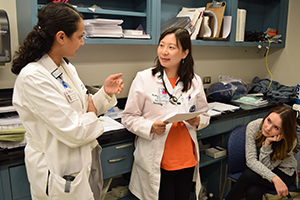 With a career that spanned four decades, Dr. Boyer brought a wealth of knowledge and resources to the study of liver disorders and their treatment. His 1971 report on a Tylenol overdose case was one of the first published in the United States about acute acetaminophen toxicity which resulted in liver injury and kidney failure for a woman he had treated while a University of Southern California resident at Los Angeles County Hospital. He later pursued fellowships in liver disease at USC and gastroenterology at the University of California, San Francisco, before serving as chief of gastroenterology at the San Francisco VA Medical Center and director of the Division of Digestive Diseases at the Emory University School of Medicine. He was co-editor of Hepatology, A Textbook of Liver Disease (now in its seventh edition), and has authored or co-authored more than 100 other publications.

Dr. Boyer enjoyed more than 25 years of research funding from the National Institutes of Health. Among NIH-sponsored clinical trials he was involved in are a comparison of shunts used in management of variceal bleeding and use of SAMe (S-adenosyl-L-methionine disulphaste P-toluene-sulfonate) to reduce the likelihood of development of hepatocellular carcinoma — a cancer that occurs in people with liver disease, particularly sufferers of chronic hepatitis B and C. Under his tenure, the institute has helped discover a genetic mutation that increases the risk of cirrhosis. Related to treatment of cirrhosis, hepatitis C and blood platelet deficiencies in patients with liver disease, he has multiple pharmaceutical company-sponsored studies ongoing.

As a result of the institute’s participation in developing these new and more effective therapies and procedures for patients suffering from liver disease, we’re able to provide many with early access to state-of-the-art, potentially life-saving treatments before they are available to the general public.

And with education a core mission of the institute, Dr. Boyer worked out ACGME approval for a fellows exchange program that allows gastroenterology fellows from the University of Nevada – Reno School of Medicine in Las Vegas to complete their hepatology clinical training here under the guidance of UA faculty (pictured on left in image above right) at Banner – University Medical Center Tucson.