Dr. Kern (below left) was named a CPR Giant by the International Liaison Committee on Resuscitation. He was joined at the 2015 Honorees Dinner in Dallas by family members, including his wife, Martha; son, David; and daughter-in-law, Jessica.

Karl B. Kern, MD, has learned a lot about sudden cardiac arrest and CPR since his first "Code 99," the term used for cardiac arrests at the hospital where he spent his vacations from medical school working as a nurses' assistant.

"A critically ill patient was intubated and agitated. Suddenly, he attempted to sit up and immediately slumped back in a supine position," recalls Kern, now a professor of medicine and co-director of the UA Sarver Heart Center. "The cardiac monitor sounded. I hurriedly glanced at it and saw no electrocardiographic activity. 'Straight line!' I looked at the monitor and again at the patient, now motionless, and shouted, 'Code 99!' Within a few seconds the code team resident arrived and placed his hand over the femoral triangle, feeling for a pulse. Even across the bed from where I stood, I could see the resident's hand rhythmically bouncing up and down in time with the strong femoral pulse.

"This was no cardiac arrest, but simply the patient's monitoring leads detached because of his sudden movement. The code team was somewhat relieved, but slightly agitated with my false alarm. I have often thought about that experience. Apart from my own ego, no one was permanently injured. I have subsequently encouraged literally scores of new interns, as they begin their medical training each July, not to be hesitant in asking for help, particularly in dealing with cardiac arrest," adds Kern.

During the past few decades, Kern, who now holds the Gordon A. Ewy, MD, Distinguished Endowed Chair of Cardiovascular Medicine at the UA Sarver Heart Center, has contributed much to the understanding of cardiac arrest and resuscitation science that the International Liaison Committee on Resuscitation honored him as a CPR Giant at its 2015 Honorees Dinner. He is the third member of the UA Sarver Heart Center Resuscitation Research Group to achieve this recognition, joining Dr. Gordon A. Ewy, professor emeritus and director emeritus of the UA Sarver Heart Center, who was named a CPR Giant in 2000, and Dr. Robert Berg, now professor of anesthesiology and critical care at the University of Pennsylvania, who was honored in 2010.

Kern's accomplishments, cited by the ILCOR, include: 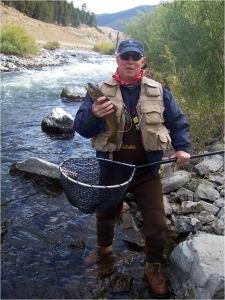 When Kern isn't studying resuscitation science or caring for patients as a highly productive interventional cardiologist, you might find him fly fishing along some isolated riverway where he becomes "unplugged." Or, he's spending time with his growing group of grandchildren.

But, as his current research endeavor shows, he plugs in as soon as he returns.

Kern is now conducting a clinical research study that could lead to further improvements in post-arrest survival.

Cardiac arrest is a major public health issue. Only 40 percent of the people who have an out-of-hospital cardiac arrest make it to the hospital alive, and of that 40 percent, only one in four survives. If the ECG shows a heart attack, cardiac arrest patients have a coronary angiogram, or heart catheterization. When the ECG does not show an obvious heart attack, the timing of the heart catheterization is decided on a case-by-case basis by treating doctors.

Kern's new study, which falls under FDA Guidelines – Exception from Informed Consent for Emergency Research, will answer the question: Does an early heart catheterization improve survival, regardless of what the ECG shows? The study has the potential to impact care of all cardiac arrest patients.

You can help Kern advance his study by completing a community survey online at heart.arizona.edu/PEARL. Before researchers start this study, they need to inform the community about its purpose. Responses to this survey help the team know whether efforts to notify the community were successful and whether the study is considered acceptable to the public.