UA research team studying the anti-inflammatory impact of turmeric is moving the project out of the laboratory and into patient testing.
By Lisa Romero
The goal of this small study is to lay the groundwork for a larger and longer treatment trial that also would take place in Arizona.

Turmeric, a golden-hued spice native to South Asia, has been used for centuries in the Indian-based healing practices of Ayurveda to treat many ailments, including arthritis, stomach problems, poor circulation, and skin diseases. Turmeric has long been recognized for its anti-inflammatory benefits, however the mysteries behind how it actually affects the human body have largely remained unsolved until now.

Janet Funk, MD, University of Arizona associate professor of medicine and nutritional sciences in the College of Medicine -- Tucson, has been working to crack the code behind turmeric’s medicinal potential for several years.

“When we first started researching turmeric, it had not yet been studied scientifically in order to discover whether it actually worked as an arthritis treatment,” said Dr. Funk, also a member of UA’s BIO5 Institute and Cancer Center. 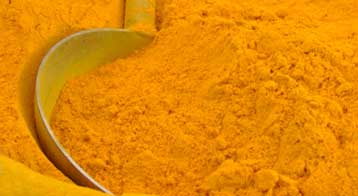 Funk and her research team decided to primarily focus on turmeric’s effects on rheumatoid arthritis (RA). They were able to demonstrate that the chemicals in turmeric were highly effective in blocking the body’s inflammatory response—a helpful bit of medicinal knowledge not only for the treatment of arthritis, but also other complications of inflammation, such as stroke. While these were excellent results, the next trick was to figure out which molecules were doing the real work and creating those desired effects, as well as which molecules might cause concerning toxicities.

While prescription medications like Humira and Celebrex are used to treat RA, Dr. Funk was interested in finding out if turmeric could be equally effective without as many corresponding side effects.

During their investigational studies, the UA team found that turmeric worked as well in blocking arthritic inflammation as commonly prescribed medications.

“In our experimental studies, we found turmeric inactivates a protein that is essentially the commander of a “fleet” of inflammatory proteins made by the body; when you block this protein, the fleet does not sail,” said Dr. Funk.  “Interestingly, the same protein is also a master regulator of bone breakdown, which is also a problem in RA, so turmeric’s blockade of this protein is sort of a `two for the price of one’ situation in RA.”

Now that turmeric’s biologically active spicy compounds and intracellular targets in experimental models have been identified, Dr. Funk and her team are moving the project out of the laboratory and into the clinic to study turmeric’s effects in people.

The team successfully competed for funding from the National Institutes of Health (NIH), the agency that will oversee the clinical trial of 45 patients suffering from RA. The study will compare the effects of varying doses of turmeric dietary supplements alongside an inactive placebo over the course of a month, and is seeking to enroll individuals with RA whose symptoms are not well controlled on methotrexate, a common first line treatment for the disease.

“We are calling it the CLaRA study, which is short for a title that includes turmeric’s botanical name (Curcuma longa L in Rheumatoid Arthritis),” Dr. Funk said. “We hope that this name will bring to mind both Clara Barton, a health-care pioneer in an era when most medicines were plant-based, and claro, which means “clear” in Spanish, since we believe this study will help clarify exactly what role this botanical may play in modern-day arthritis treatment.”

The goal of this small study is to lay the groundwork for a larger and longer treatment trial that also would take place in Arizona.

Bringing to light the potential that natural remedies can play in modern medicine was really the core catalyst to Dr. Funk’s turmeric study. She says that had it not been for NIH funding provided to the UA about a decade ago to create a large botanical research center, she would not have had the resources to conduct her study. Barbara Timmerman, PhD, a former Regents’ Professor at the UA College of Pharmacy and natural products chemist, was the driver behind that original grant, and headed the botanical research center.

Many contributors played a role in the turmeric study. Dr. Funk mentions a time when the turmeric root upon which her team conducted tests was cultivated at the UA in a greenhouse on the roof of a parking garage.

“Ongoing research projects require teams of talented UA faculty, students and staff with complementary areas of expertise, ranging from biostatisticians to pharmacologists to clinicians,” says Dr. Funk. “ It takes a village to move research all the way from the lab bench to the bedside; the UA is our village.”

With the RA clinical trial soon underway, Dr. Funk also is focused on expanding the impact turmeric may have to other diseases.

“One of the exciting things about studying ancient treatments using modern tools is that once you figure out how they work, you sometimes realize that they might also be useful for the treatment of entirely different diseases,” she said. “From learning how turmeric affects bone in our early arthritis work, we realized that turmeric also might be useful in blocking bone metastasis in women with advanced breast cancer.”

Dr. Funk is testing this theory by starting to examine bone effects of turmeric in breast cancer.  She also is collaborating with Thaddeus Pace, PhD, assistant professor in the UA College of Nursing, who is conducting a small pilot study to examine the ability of turmeric to reduce fatigue in women undergoing chemotherapy and radiation treatment for breast cancer, with the goal to lay the groundwork for future trials in women with breast cancer.

Those interested in more information on the turmeric study or to participate in the clinical trial can contact Dr. Janet Funk or Marcy Watchman at botanicals@email.arizona.edu or (520) 626-4744.

*An Institutional Review Board responsible for human subjects research at The University of Arizona reviewed this research project and found it to be acceptable, according to applicable state and federal regulations and University policies designed to protect the rights and welfare of participants in research.

This research has been funded by NIH as follows: