Asthma affects more than 278 million people worldwide and can lead to serious consequences later in life. While current approved therapies address symptoms, they do not halt disease progression.
By Lisa Romero
“One of the things we are researching is why some people with dysfunctional SP-A have acute responses when infected with pulmonary pathogens, while others end up suffering from chronic diseases, such as asthma.”

Asthma affects more than 278 million people worldwide and can lead to serious consequences later in life. While current approved therapies address symptoms, they do not halt disease progression. 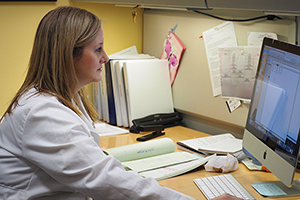 That soon may change, as a University of Arizona researcher and clinician team – Julie Ledford, PhD, and Monica Kraft, MD – using genetics as their guide are focused on turning research into new treatments for asthma and other lung diseases.

Dr. Ledford, assistant professor of medicine and immunobiology at the UA College of Medicine – Tucson, has been studying the mechanics of the pulmonary surfactant protein A (SP-A) since she was a postdoctoral student at Duke University. Since coming to the UA in early 2015, she has focused her research specifically on the role of SP-A in asthma sufferers. Dr. Ledford, a member of the UA BIO5 Institute, has found that genetic mutations in this protein may affect lung function in humans and is a defining factor in a person’s susceptibility to developing a variety of respiratory diseases.

Her new findings recently were published in The Journal of Immunology (PMID: 25957169) and highlighted in the “In This Issue” section, which is considered among the top 10 percent of articles published.

Dr. Kraft, head of the Department of Medicine at the UA College of Medicine – Tucson and also a member of the UA BIO5 Institute, has been instrumental in Dr. Ledford’s research on the role of SP-A in asthmatics. Dr. Kraft also came to the UA from Duke University, where she held multiple leadership positions, specializing in pulmonary, allergy and asthma research. She was instrumental in Dr. Ledford’s choice to continue her own work at the UA. Dr. Ledford’s research and Dr. Kraft’s ability to translate the work into clinical application are revolutionizing the way that SP-A is being studied.

SP-A is one of four proteins that, along with lipids (fats), make up surfactant, a complex, naturally occurring substance that is produced in the lungs. Fetuses begin making surfactant while still in the womb, in preparation for breathing air. Surfactant reduces the surface tension of fluid in the lungs and helps make the small air sacs in the lungs more stable, keeping them from collapsing when an individual exhales. Babies who are born very prematurely often lack adequate surfactant and must receive surfactant-replacement therapy immediately after birth in order to breathe. Scientists now know that SP-A protein also aids in the clearance of disease-causing microorganisms in the lungs. SP-A binds with these pathogens and helps cells called phagocytes move them from the airways.

During her postdoctoral studies, Dr. Ledford and colleagues found that SP-A binds to two important immune cells found in asthmatics: eosinophils and mast cells. Both of these cell types contain factors that, when released, are thought to worsen lung function, particularly in asthma where these cells are a prominent aspect of the inflammatory response. When SP-A binds to these cells, it inhibits the cells’ release of these factors, thus providing protection in the lung.

“One of the things we are researching is why some people with dysfunctional SP-A have acute responses when infected with pulmonary pathogens, while others end up suffering from chronic diseases, such as asthma,” said Dr. Ledford.

To test this, Drs. Ledford and Kraft are pioneering a new method of studying SP-A using genetics as their guide. They examined how specific gene variations of SP-A affect lung function and the ability to fight off a common pathogen, Mycoplasma pneumoniae.

Drs. Ledford, Kraft and their team have found that the human population expresses many genetic variants of SP-A. Asthmatics in particular have a specific SP-A variation that is not as useful in reducing immunological responses to infectious agents and allergens in the lungs.

While still in the early phases of their research on SP-A, the team’s ultimate goal would be “to develop a therapeutic involving small functional peptides of SP-A that can rescue the function of the genetic variant of SP-A in asthmatics,” Dr. Ledford said.

The development of a treatment based on Drs. Ledford’s and Kraft’s research could potentially save thousands of lives. The idea of using a small piece of a naturally produced protein, like SP-A, packaged into an inhaler to control asthma symptoms is quite novel, and Drs. Ledford and Kraft are excited to be conducting this research at the UA.

According to Dr. Ledford, “The UA, and in particular BIO5, is instrumental to the particular type of team science needed to adapt cutting-edge research into therapeutics.”

This research was supported by the National Institutes of Health Grants HL-111151 (to Dr. Ledford) and AI81672 (to Drs. Kraft, Hollingsworth and Voelker).