Narrated by National Public Radio's Scott Simon, “Passing On” sheds light on a subject most people shy away from—end of life. In partnership with the Pima Council on Aging (PCOA), AZPM coordinated various outreach programs open to members of the southern Arizona community, including panel discussions and workshops, to share valuable information about planning for end of life.

Also participating in the film were the University of Arizona Center on Aging, UA Division of Geriatrics, General Internal Medicine and Palliative Medicine, and the UA College of Medicine – Tucson.

“We’re excited to be part of this important program that represents a critical step in engaging patients and families in a discussion about end-of-life and goals-of-care issues,” said UA Center on Aging co-director and division chief Mindy Fain, MD. “This is a theme of our education and training efforts through our division and the center.” 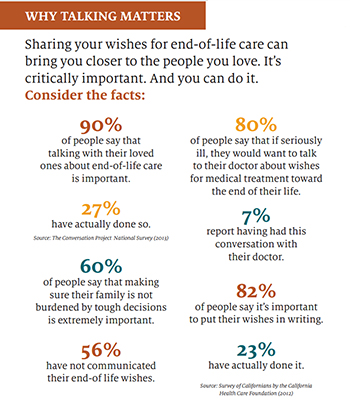 The documentary, produced by AZPM’s Tom Kleespie, will be honored with the NATAS’ 2016 Board of Governors’ Award on Saturday, Oct. 8, 6 p.m., at the 39th Annual Rocky Mountain Emmy Awards in the Salt River Ballroom at Scottsdale’s Talking Stick Resort.

The Governors’ Award is the highest honor that the chapter presents to an individual, organization or station. It’s given to a multi-platform project that extends beyond the parameters of the chapter’s regular TV distinctions.

“AZPM has been fortunate to be recognized by NATAS in the past, but this award is very special to us because it represents a collaborative, team project that involved many people in many departments and several community organizations,” Gibson said. “We're very honored and proud to receive it.”

In the documentary, UA College of Medicine – Tucson students also speak about the Living Will Project, which engages all Tucson medical students to complete their own living will so they better understand the importance of providing advance directives to medical staff on how patient wishes are carried out. The project, which gets an assist from the local chapter of the Gold Humanism Honor Society, is supported by a grant from the Arnold P. Gold Foundation.

Cara Levin, a fourth-year medical student, said, “The earlier in our training that we are exposed to end-of-life issues and the importance of advanced care planning, the more adept we'll be at having these important conversations with our patients. Our project asks students to start thinking about this their first week of medical school when they fill out their own living will, and builds on this exercise over the next four years.”