University of Arizona infectious diseases researchers led by Dr. Stephen Klotz and Shannon Smith have begun a project to address concerns in the city of Bisbee, 90 miles southeast of Tucson, about the insects, whose bite can trigger an allergic reaction and also transmit disease. Here is what they have found so far...
By Robin Tricoles
"When we were in Bisbee several months ago, Lee (a resident for 30-years) walked us through town showing us homes of people who had experienced bites," says Shannon Smith, a program manager with the UA Division of Infectious Diseases. "We went out to lunch, and we got coffee. Lee told people why we were in Bisbee, and every single person who passed had a story about kissing bugs."

With many of its houses built on uneven, rocky foundations, the southern Arizona city of Bisbee is a haven for kissing bugs, which pose serious public health concerns.

BISBEE, Ariz. — Plant your feet on Main Street in old Bisbee and cast your eyes upward, toward the turquoise blue sky. Now, take in the view — a panorama of houses perched on narrow roads that retreat into the hills.

Many of those houses date to just after the turn of the 20th century, and many were built for the miners who came to town to harvest ore. Over the years, those houses, often built on uneven, rocky foundations, have shifted with the earth, rearranging themselves, leaving their doors, windows and foundations with structural breaches. Those cracks and crevices serve as entrances for select members of the area's wildlife, such as snakes, scorpions and bugs — specifically kissing bugs, whose unpleasant habit is to bite people on the face, hence the nomenclature.

Kissing bugs are why Stephen Klotz, MD, Shannon Smith and Justin Schmidt often visit Bisbee. The trio from the University of Arizona are beginning a research project to address the community's concern about kissing bugs, Triatoma recurva, whose bite can trigger serious allergic reactions in humans as well as transmit disease to people and their pets.

"We started the project to encourage people to share their experience with kissing bugs," says Smith, a program director at the UA College of Medicine – Tucson in the Division of Infectious Diseases. "My job is to make connections among participants in the project, so we can learn about the kissing bugs' behavioral patterns and how people are responding to their bites." 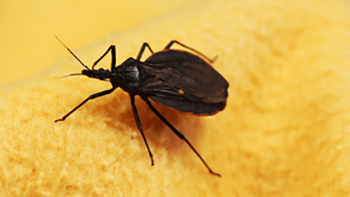 The bite of kissing bugs can trigger allergic reactions in humans and also transmit disease to people and their pets. The U.S. is home to 11 species of kissing bugs across 28 states. (Photo: Bob Demers/UANews)

Dr. Klotz, a UA professor of medicine who served as the previous infectious diseases division chief, is the study project's principal investigator. He learned of Bisbee's kissing-bug activity after being contacted by Lee McElroy, a 30-year resident of the Cochise County city of 5,300 people that is about 90 miles southeast of Tucson.

McElroy says she was waking up with red welts on her face and neck, caused by kissing bugs, followed by flu-like symptoms.

Schmidt, an entomologist with the UA Center for Insect Science's Southwest Biological Institute and known informally as the "King of Sting," is an expert on the kissing bug's behavior and its physiology. He says Bisbee is an ideal place for a kissing bug to live.

A 'Paradise' for the Bugs 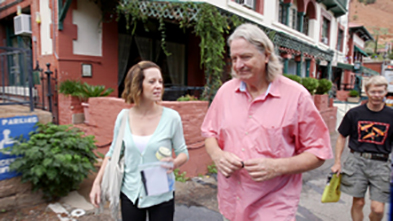 "From a bug's point of view, Bisbee is a paradise, absolutely wonderful," Schmidt says. "And, you say, why would that be? And it's because of rocks and crevices, little cracks that you can wiggle your way into. The predators can't get into them. In addition to that, dinner is right there at home."

Initially, McElroy contacted Patricia Dorn, PhD, a professor of biology at Loyola University New Orleans. Dr. Dorn's research focuses on controlling Chagas disease, which is transmitted by kissing bugs and can cause rashes and fever, heart damage and even death. Dr. Dorn, in turn, advised McElroy to contact Dr. Klotz.

Not long after they made contact, McElroy started collecting kissing bugs found in her home. She brought them to Klotz for analysis. Lately, she has been asking neighbors and friends to do the same, and they have obliged. They are placing small jars of the bugs on her porch, and when she reaches a critical mass, she drives the lot of them to Dr. Klotz's office in Tucson. 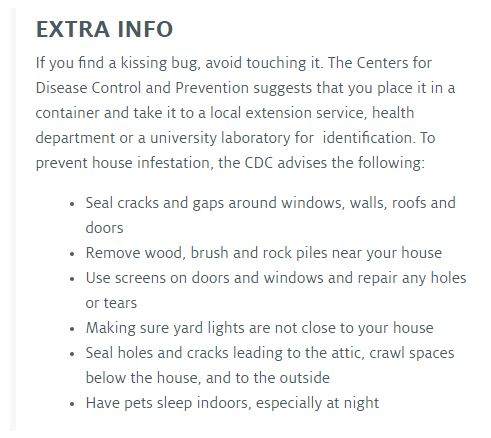 Asking about the structure of people's homes is where Smith begins the team's investigation into kissing bugs' domiciliation.

Smith asks residents who are willing to share their experiences with kissing bugs about the year their home was built, how long they have lived there, whether the windows and doors are sealed, whether lights are left on at night and whether there are animals in the home or close to it.

"When we were in Bisbee several months ago, Lee (McElroy) walked us through the town showing us the homes of people who had experienced bites," Smith says. "We went out to lunch, and we got coffee. Lee told people why we were in Bisbee, and every single person who passed had a story about kissing bugs."

Some people, however, have no idea they've been bitten by a kissing bug until they wake up and find a crushed bug in their bed, or drops of blood on the sheets, or red, itchy welts, often around their eyes and lips.

"The bites themselves are a problem because they lead to local allergic reactions sometimes," Dr. Klotz says. "Most times it's a painless bite, and people are entirely unaware of it, but some people — and we have testimony from Bisbee — have anaphylaxis, and they end up in the emergency room."

Anaphylaxis, a severe allergic reaction to the bugs, is more likely to occur after people are bitten repeatedly over time. Patients experience shortness of breath because they are usually in shock, and they will itch all over because of a release of histamines, Dr. Klotz says.

"That's the science of anaphylaxis," he says. "You have to have an initial event, and then you have to have time go by and be bitten again. How much time? No one knows."

Unlike bee stings, there is no immunotherapy for kissing-bug bites.

The United States is home to 11 species of kissing bugs across 28 states, and Dr. Klotz says their range is expanding.

"We know this because of the expansion of chagas disease in dogs and other small animals," he says.

In a recent study, Dr. Klotz and his colleagues randomly selected for analysis eight of 134 kissing bugs they had captured in a zoological park near Tucson. They found that all eight contained human blood, and seven of the eight had fed on various and sundry vertebrates. Three of the bugs were infected with Trypanosoma cruzi, the parasite that causes Chagas disease. 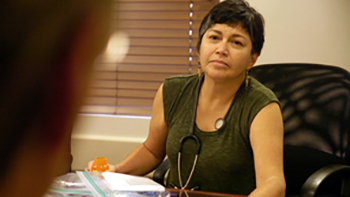 To learn more about the bugs' behavior and whether Bisbee's kissing bugs are harboring disease, the team is collaborating with Elizabeth Lueck, Emergency Preparedness and Planning program director for Cochise County Health and Social Services, and with Peggy Avina, MD, a primary-care physician at Bisbee's Copper Queen Hospital.

Pictured at left, Dr. Peggy Avina, a primary-care physician at Bisbee's Copper Queen Hospital, has been involved in the kissing-bug issue from the community side. (Photo: Bob Demers/UANews)

Although Dr. Klotz is concerned with the possibility of Chagas disease, he and his team haven't yet seen evidence that Bisbee's kissing bugs are transmitting Chagas. Kissing bugs become infected with T. cruzi by biting an infected animal or person. Once infected, the bugs bite another animal or person, feed on the blood and pass along the T. cruzi parasites via their feces to that same host.

"They defecate on the hosts," Dr. Klotz says. "Because it itches, the hosts rub the feces into the wound and then the parasite gets into the bloodstream, but this isn’t occurring here."

He says he knows of no domestically acquired cases in Arizona and of only seven in the United States.

Chagas Can Be Acute or Chronic

Chagas disease has two phases — acute and chronic. Symptoms of acute Chagas may include fever, chills, fatigue, body aches, nausea, diarrhea or vomiting within several weeks of a bite.

"It's very important to treat people who have acute Chagas disease right away," Dr. Klotz says. "You can cure them of it and eliminate the parasites. Most people survive. In fact, very few people die of acute Chagas."

But chronic Chagas is another story. It occurs in about one-third of those with Chagas and can affect people over time. T. cruzi can destroy heart tissue and cause an enlarged heart as well as enlarged intestinal cavities in some cases, which is why it's important to treat acute Chagas before it turns chronic, Dr. Klotz says. Although several treatments are available, they are "not very good," he adds. "They're often worse than the disease."

That is why preventing bites is key — and is one of the aims of the project. But what does that mean for the people of Bisbee?

"They still have the bugs coming in and out of their homes," Smith says. "They're still being bitten. So what can we do to make this (the study) more meaningful to them?"

One thing that can be done, she says, is to come up with ways to help prevent residents from being bitten, such as sealing cracks in houses and replacing window screens. And if they are bitten, residents need affordable ways to get tested for Chagas disease.

In the meantime, McElroy and her neighbors are still collecting kissing bugs and delivering them to Dr. Klotz. And he and Schmidt are still analyzing them. The team's work has just begun.