Cardiology's Slepian One of Two Named Fellows of Academy of Inventors

Cardiology's Dr. Marvin J. Slepian and Optical Sciences' James Wyant join those who have impacted quality of life, economic development and the welfare of society.
By Paul Tumarkin
"It is truly an honor to be recognized by the National Academy of Inventors," Dr. Slepian said. "Invention is seeing — envisioning what can be, where we can go, how to improve — leading to innovation. I look forward, based on this recognition, to continue to spark creativity in our students to empower their ingenuity for the future."

University of Arizona inventors Marvin J. Slepian, MD (above), of the Colleges of Medicine and Engineering and James Wyant of the College of Optical Sciences have been elected as Fellows of the National Academy of Inventors. Election to NAI Fellow status is a professional distinction granted to academic inventors who have demonstrated a prolific spirit of innovation in creating or facilitating outstanding inventions that have made a tangible impact on quality of life, economic development and the welfare of society.

Along with being an experienced entrepreneur-inventor, Slepian is a professor of medicine (cardiology) and associate department head of biomedical engineering in the UA College of Engineering, as well as a McGuire Scholar in the Eller College of Management, where he teaches an annual course on innovation. 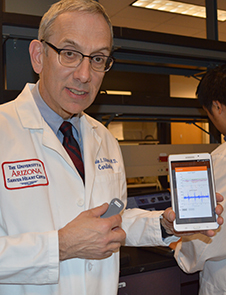 Most recently, in collaboration with Tech Launch Arizona — the office of the UA that commercializes inventions stemming from University research — Slepian started the Arizona Center for Accelerated Biomedical Innovation to serve as a "creativity engine" where investigators can work with experienced innovators to flesh out ideas and invent, strategize next steps in technology development, and access scientific and business resources to move their ideas forward. His work to reduce blood clots that could lead to stroke in ventricular assist device (VAD) patients also was recently recognized by the National Institutes of Health biomedical engineering unit. And he was inducted in October 2015 as president of the International Society for Mechanical Circulatory Support during the group's 23rd Annual Meeting in Dubrovnik, Croatia,

"It is truly an honor to be recognized by the National Academy of Inventors," Slepian said. "Invention is seeing — envisioning what can be, where we can go, how to improve — leading to innovation. I look forward, based on this recognition, to continue to spark creativity in our students to empower their ingenuity for the future."

Slepian's lab in the UA Sarver Heart Center has successfully translated a wide variety of concepts from bench to bedside, having developed therapeutic solutions based on polymeric biomaterials, such as drug-eluting stent technologies, tissue "paving," stent coatings and tissue sealants, as well as cardiovascular prosthetic devices including the total artificial heart. Slepian is a named inventor on 52 issued patents and applications and is a co-founder of SynCardia Systems, the company that brought the total artificial heart to market. He has commercialized a range of inventions and founded other medical device companies, including Focal (NASDAQ), Hansen Medical (NASDAQ), Arsenal, 480 BioMedical and MC10. Slepian is an elected fellow of the American Institute for Medical and Biological Engineering and current president of the International Society for Mechanical Circulatory Support. 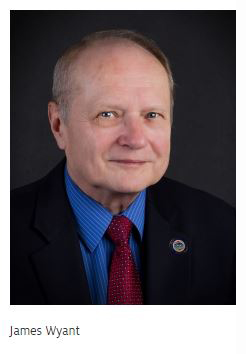 Wyant is a professor emeritus of optical sciences and electrical and computer engineering, and he is the founding dean of the UA College of Optical Sciences. He has more than 300 publications and invited talks and is widely recognized as an expert in the fields of interference, diffraction and optical testing. He is a pioneer in the fields of phase shifting interferometry, multiple wavelength interferometry, vertical scanning interferometry and holography, and he is a named inventor on 10 patents.

He has received numerous awards, including the SPIE Governor’s Award, the R&D 100 Award, the OSA Joseph Fraunhoffer Award and the SPIE Gold Medal Award, and he is a member of the National Academy of Engineering. He served as the dean of the College of Optical Sciences from 2005 until 2012.

"I am very pleased to receive this honor," Wyant said. "I wish that during the early years of my career I had realized the importance of patents. Often we do not file for a patent because at the time of the invention, the invention is not useful, but it is hard to predict the future, and in a few years this invention may become very useful and important and the patent can become extremely valuable."

About the National Academy of Inventors

The 168 named this year bring the total number of NAI Fellows to 582, representing more than 190 prestigious research universities and governmental and nonprofit research institutions. The 2015 Fellows account for more than 5,300 issued U.S. patents, bringing the collective patents held by all NAI Fellows to more than 20,000. These academic luminaries have made a significant impact to the economy by making innovative discoveries, creating startup companies and enhancing the culture of academic invention.
The NAI Fellows will be inducted on April 15, 2016, as part of the fifth annual conference of the National Academy of Inventors at the United States Patent and Trademark Office in Alexandria, Virginia. USPTO Commissioner for Patents Andrew Hirshfeld will give the keynote address for the induction.

OTHER RECENT HEALTH ARTICLES FROM UANEWS: