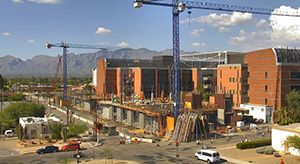 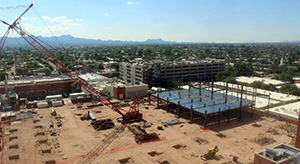 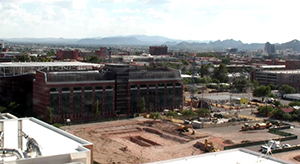 The big crane arrived onsite the last week of July for the big push to erect steelworks behind the new 9-story hospital tower for Banner – University Medical Center Tucson—and already is well under way toward that goal (above middle). 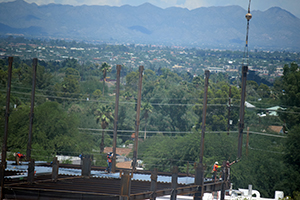 Current status of that work can be viewed by live webcam here.

You can also view status reports on all three construction projects on the University of Arizona Health Sciences campus in Tucson via the UAHS Campus Construction Updates website, which includes overviews, a site plan, e-newsletters and webcams. This includes for the new Health Sciences Innovation Building (above right), for which excavation began on the basement with the Banner crane arrival. Meanwhile, Cherry Avenue between Mabel and Helen has been closed for the balance of construction on the BioScience Research Lab (above left). Keep abreast of this site plan map for where to park and how best to get there.

The Banner crane is one of two 360-foot-high cranes to be used for piecing together the framework of the new structure. 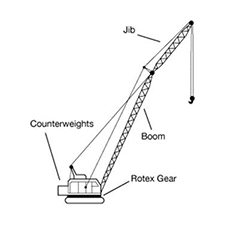 A diagram of the assembled crane and its key parts

These cranes are different from the tower cranes you see being used on the UA construction sites. This "crawler crane" has a much heavier base and can move around the construction site, albeit extremely slowly. Below are some facts that may be of interest:

Be aware also that several work sessions were held with all the helicopter services in Southern Arizona to establish and test a communications protocol to ensure safe helicopter access to the Banner UMC helipad while the crane is operational for the next six months — and after.