Nearly a hundred people participated in the regional summit hosted June 29 by the University of Arizona Cancer Center as part of the nationwide Cancer Moonshot events sponsored by the White House as part of an initiative to marshal resources to cure cancer.

For more photos, click here or on the image on the left. You can see coverage of the event on area media at the following links:

The Cancer Moonshot Initiative, being led by Vice President Joe Biden whose son Beau died of cancer a year ago, was announced by President Obama at his State of the Union Address in January. The vice president made an address via live-streaming to participants in the local summits. 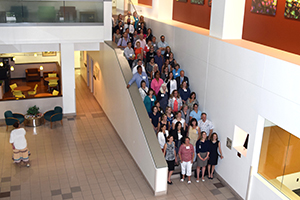 After the summit, participants gathered for a group photo.

The goal of the summit is to spur discussions throughout the country and open the door for new collaborations, while creating a formal mechanism for individuals and organizations representing all types of cancers to have direct engagement with the Cancer Moonshot Initiative.

Tucson participants included UA physicians and researchers, members of related government agencies and community organizations, and cancer survivors and their families — among them, Geoff Schmidt, who was in the news recently for dedicating a run from Tucson to Phoenix to his brother who died of cancer.

Following an address by UA Cancer Center Director Andrew Kraft, MD, and State Cancer Prevention and Control Office Chief Virginia Warren, roundtable discussions were facilitated by some of UACC's top cancer experts. Dr. Kraft pointed out that there are more than 32,000 new cases of cancer and nearly 12,000 deaths from cancer each year, making it the leading cause of mortality here.

At the summit’s close, it was announced a report would be generated and a follow-up event convened to discuss ideas generated. Warren announced she would compile a report based on the results from the handful of Cancer Moonshot Regional Summits held across the state. She had said earlier a big part of the problem with cancer survival in Arizona was the low screening percentage, noting 45 percent of those diagnosed with colorectal cancer were already in late stages of the disease when they found out.

The UACC is one of 45 comprehensive cancer centers in the nation and the only one headquartered in and serving the state of Arizona that has been designated by the National Cancer Institute as a Comprehensive Cancer Center, the NCI’s highest designation. The UACC's 73 research labs and more than 300 nationally and internationally renowned physician and scientist members work to bring the power of research to cancer prevention and treatment through a direct link between the latest research discoveries and patient care. 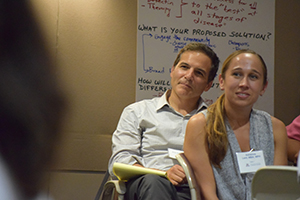 Among participants in the Cancer Moonshot summit from the Department of Medicine were the Division of Hematology & Oncology's Pharminder Singh, MD, Translational Medicine's Eric Knudsen, PhD, and Pulmonary intensivist Afshin Sam, MD.