UA Valley Fever Center for Excellence Director John Galgiani, MD, is the lead author on new updated guidance from the Infectious Diseases Society of America for primary care physicians and other clinicians on treatment and care of patients suffering from coccidioidomycosis, a fungal disease endemic to the Southwest known as Valley Fever.

University of Arizona professor of medicine John Galgiani, MD, director of the UA Valley Fever Center for Excellence, is the lead author of the just-released “2016 Infectious Diseases Society of America (IDSA) Clinical Practice Guideline for the Treatment of Coccidioidomycosis”—which also are the topic of an article in the journal Clinical Infectious Diseases published July 27.

Also among the guidelines' authors were Neil M. Ampel, MD, a UA professor of medicine in the Division of Infectious Diseases, member of the Valley Fever Center for Excellence and an infectious diseases specialist at the Southern Arizona VA Healthcare System, as well as Jeffrey R. Lisse, MD, a former UA professor of medicine with the Division of Rheumatology who left in June to take a position with Eli Lilly & Co.

Drs. Galgiani, Ampel and Lisse were part of a panel of 16 experts who reviewed available literature on coccidioidomycosis, also known as Valley Fever. The recommendations update guidance from the IDSA from 2005. They include suggested treatment options for pregnant women, patients who may be immunocompromised and others who may have a higher risk of severe coccidioidal illness, according to recent articles.

Dr. Galgiani underscores the advice included in the guidance for primary care providers who could easily mistake the fungal infection for other forms of pneumonia.

“This is a disease that’s underdiagnosed. Doctors, even in Arizona where it’s a lot more common, don’t look for it. And when they do look for it, they don’t know what to do when they find it. The old guidelines really didn’t pay much attention to that problem because it was sort of a primary care thing,” he said.

“Specialists would get involved once the diagnosis was made. And then, they’d say, ‘Oh, we need a consult.’ The point is that if all the professionals were diagnosing this disease sooner, then care would be improved because all sorts of unnecessary care is not needed if you have the right diagnosis.” 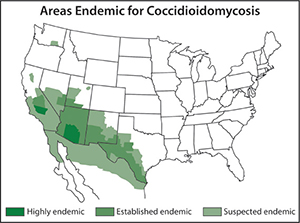 He noted a friend who was diagnosed with Valley Fever after several days in the hospital, who should not have been hospitalized to begin with—as care for the fungal disease can often be taken care of in an outpatient clinic setting at much less expense.

“That’s an example of maybe $20,000 of hospital care, maybe $30,000, that was unnecessary for best care,” Dr. Galgiani said. “The new guidelines are intended to address that.”

These guidelines are a follow-up to earlier releases from IDSA this month recommending shorter courses of antibiotics in general for hospital-acquired, ventilator-associated pneumonia. Dr. Galgiani was the lead author on the last revision of guidelines for coccidioidomycosis care by IDSA.

The UA Valley Fever Center for Excellence was established in 1996 by the Arizona Board of Regents for the benefit of the entire state. Based at the UA Health Sciences campus which includes the UA College of Medicine – Tucson, the center has developed a research base, including all three of the state’s universities, and an information program for both the scientific community and the general public. Much of the center’s research is conducted at the UA BIO5 Institute.

For additional information, see below: