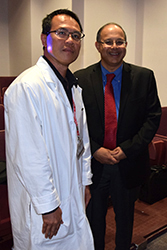 a visiting scholar to the University of Arizona College of Medicine – Tucson from Thailand, where he’s an instructor in the Division of Nephrology at the Faculty of Medicine Siriraj Hospital, Mahidol University, in Bangkok, will recall of Tucson.

On the one hand, Dr. Rukasuk (who prefers to be called “Kob”) was happy to head home Tuesday, Oct. 18, after a little more than two years studying abroad—the last six months with the UA Division of Nephrology. He has been learning advanced kidney care, techniques for improved vascular access in hemodialysis and research methods mostly under the tutelage of division chief and professor of medicine Prabir Roy-Chaudhury, MD, PhD. This was first at the University of Cincinnati, where Dr. Roy-Chaudhury taught and practiced prior to joining the UA faculty in July 2015, and, since April, here.

"It has truly been a pleasure and privilege to have intereacted with Dr. Rukasuk (Kob) over the last six months," Dr. Roy-Chaudhury said. "I hope he takes back to Thailand both scientific knowledge about vascular issues in kidney disease patients and also the friendships that he made here in Tucson; on our side, we learnt a lot from Kob about nephrology in Thailand and about his passion to make an impact on clinical care there using what he learnt at UA—but, most of all, we gained from his warmth and friendship."

On the other hand, Dr. Rukasuk and all of his countrymen have been grieving since Thursday, Oct. 13, at the death of His Majesty King Bhumibol Adulyadej, who passed away following an extended illness with cardiovascular disease. After seven decades on the throne, King Bhumibol was Thailand's and the world's longest-serving monarch at the time of his death. A colorful figure born in Cambridge, Mass., when his father was earning his medical degree at Harvard University, the king was fond of jazz, once playing the saxophone with bandleader Benny Goodman. But Dr. Rukasuk remembers him more as a stabilizing figure who helped to modernize many facets of his country’s economy and culture. That makes going home bittersweet.

“He was more than a king—he was like our father, a father for the whole country, for everyone,” said Dr. Rukasuk, getting choked up over the depth of sentiment he felt for King Bhumibol. The 42-year-old physician met the royal patriarch twice, he recalled, once when he was a child and the king traveled to inaugurate an infrastructure project in what were then the dangerous rural northern districts. This was near Laos following the Vietnam War. Dr. Rukasuk also met the king when he graduated from the medical school at Mahidol University in 1998.

Hospitals in Nan and Phrae, Thailand, and Siriraj Hospital in Bangkok, where Dr. Rukasuk practices medicine.

Afterward, Dr. Rukasuk was a staff physician at the hospital in Nan, Thailand, and later the hospital in Phrae, Thailand, both in the northern districts. He was certified by the Thai Board of Internal Medicine in 2004 and the Thai Subspecialty Board of Nephrology in 2009, and joined the medical faculty at Siriraj Hospital and Mahidol University in 2010. Since then, he also has been a physician to Her Royal Highness Princess Chulabhorn Walailak, a scientist who lectures in chemistry at the university and is heavily involved in promotion of scientific research in Thailand. She also suffers from lupus, an autoimmune disease in which the body mistakenly attacks healthy tissue and organs, including the kidneys. 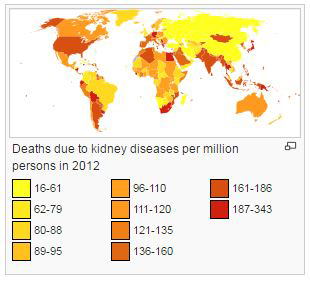 For that reason, he’s grateful to Dr. Roy-Chaudhury for accepting his email request to come study dialysis vascular access under him so that he could work to improve survival and quality of life for chronic kidney disease (CKD) and end-stage renal disease (ESRD) patients in his own country.

For them, the issue isn’t so much dialysis, which is subsidized by the Thai government and often seen as a lifeline until, if and when, they can get a kidney transplant. It’s awareness. A 2010 study in npt Nephrology Dialysis Transplantation, a journal published by the Oxford University Press, found the prevalence of CKD in Thailand was higher than previously thought (up to 17.5 percent). But worse, only 1.9 percent of sufferers knew they suffered from the disease. Global incidence of kidney disease is illustrated in the World Health Organization map at right (click image to enlarge).

Click here [PDF] or on the image at left to view a photo gallery of Dr. Kob's final days in Tucson before returning to Thailand.

He’s impressed with the holistic approach taken here toward clinical treatment extending to basic and translational science employed in seeking solutions (therapeutic or devices) to improve the 50 percent failure rate for arteriovenous fistulas (AVF)—the most common connection between patient and dialysis machine—to ensure better vascular access. He hopes to be able to take what he’s learned to improve outcomes in Thailand, particularly for patients in rural districts such as where he grew up.

Dr. Rukasuk’s visit is an important first step toward developing strong international collaborations and links between the UA Division of Nephrology and leading kidney centers across the world, Dr. Roy-Chaudhury said. In addition to visiting scholars from China and India, who will be joining his laboratory next year, the division has recently hosted invited speakers from India and Taiwan, is also developing linkages with a group in Spain and has hosted numerous other guest lecturers. He added, "There is lots this country can offer to the rest of the world in terms of knowledge and resources in this field; at the same time, there is also much we can learn from other countries to improve the care we provide to our own patients with kidney disease."

For his part, Dr. Rukasuk likes to talk about all the things he’s seen and done while in the United States, such as attending Nephrology 2016, a conference in Boston this spring, seeing Harvard Yard and rubbing the foot of the statue of the university’s founder—a tradition for luck. He also has visited New York and Washington, DC.

A few weeks back, his parents—who are retired primary school teachers—came to visit and he took them to see Antelope Canyon near Page, Ariz., and then to the South Rim of the Grand Canyon, as well as the San Xavier del Bac Mission and other tourist spots here in Tucson.

Last winter, he also traveled to Colorado with a Thai friend who’s studying at the University of Minnesota, as Thailand has no snow and Dr. Rukasuk was determined to learn how to ski. This was the same friend he called to commiserate with when he learned of King Bhumibol’s death. “I took several lessons with an instructor before I try by myself. It was hard, but fun,” he said.

At home, Dr. Rukasuk will be able to enjoy a little winter wonderland with the opening of Southeast Asia’s first Snow Town theme park in Bangkok last year. He hopes to come to Tucson again soon, but may have to wait at least a year as that's the allotted time of mourning for all of Thailand. All civil servants, including him, will wear black until Crown Prince Maha Vajiralongkorn, the king's only son, ascends to the throne at the end of that period.