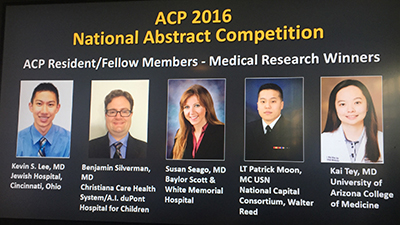 The display at ACP Nationals in DC announcing winners in the 2016 National Abstract Competition.

Dr. Tey’s ACP presentation centered on “Implementing an Inpatient Chain of Survival at an Academic Medical Center.” Facing a panel of judges, she was one of five winners out of 20 presenters in the National Abstract Competition and received a financial award as well. 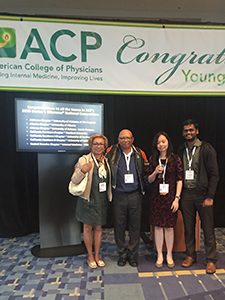 Dr. Trowers, his wife (to his left), Dr. Kai and Dr. Natarajan at the ACP Nationals competition. South Campus internal medicine residents swept the state competition to represent Arizona at the DC event.

“They quickly improved the rapid response rate and, because of the educational process implemented with nurses and physicians alike, they had much better outcomes without any mortalities throughout the period of time evaluated. So, it was a dramatic turnaround and I’m sure that had something to do with why it got selected,” Dr. Trowers said.

He added, “Based upon who won at the state ACP competition last fall, we had participants in several areas. As a matter of fact, all the UA representatives at ACP Nationals were from South Campus as it turned out this year and we’re proud of them all. Go, South Campus!”

Among others at the ACP Nationals, the South Campus Doctor’s Dilemma Team—Senthil Anand, MD, Muhammad Husnain, MBBS, and Balaji Natarajan, MBBS—took third place on the first day after leading much of the competition. Unfortunately, this was not enough to advance to the finals.

Jessica August, MD, presented her Oral Clinical Vignette, “Running out of Sight.” It focused on a tick-born infection, Borrelia hermsii, that usually causes relapsing fever. In this particular case, though, the result was the first instance of a finding called neuroretinitis, accompanied by central vision deficit with headaches.

Rhonda Alkatib, MD, also received a scholarship to attend the ACP Leadership Day in Washington, DC. She was able to meet with Arizona's legislators and staff, receive in-depth briefings from White House Officials, Capitol Hill staffers and members of Congress and she received a comprehensive orientation on ACP's top legislative priorities.

As a footnote, Dr. Trowers noted, another South Campus resident Norm Beatty, MD, also won a GME Resident Excellence and Leadership Scholarship and was chosen at the Department of Medicine awards reception for the Program Director’s Outstanding Humanism and Professionalism Award for the UA Internal Medicine Residency – South Campus program.