A University of Arizona collaborative study among the Departments of Otolaryngology – Head & Neck Surgery, Speech, Language, and Hearing Sciences, and Psychology received approval in early May to begin accepting human subjects in an effort to determine if older adults suffering from prolonged hearing loss get a cognitive boost after cochlear implant surgery.

The study’s underlying hypothesis is that seniors suffering prolonged hearing loss also may suffer cognitive loss due to auditory deprivation, and not only will improved hearing with cochlear implants halt that cognitive decline, but potentially reverse it and improve their quality of life in the process.

A surgeon who specializes in cochlear implants, Dr. Jacob will perform this procedure on more than 75 patients—many of them over age 72—this year at Banner – University Medical Center Tucson.

As an example of the outcomes he sees among implanted patients, he mentions the wife of a patient in his 90s who told him that she and her husband hadn’t had a meaningful conversation in 20 years. “Now, after cochlear implant surgery, they are able to talk over a cup of coffee. That is huge,” he said.

Another patient in his 80s was scoring about 20 percent on speech understanding tests prior to cochlear implants. Now, he’s scoring more than 80 percent, he said.

Dr. Jacob also noted a father in his 70s and his son, who go on an annual hunting trip with a long drive that takes hours—all in silence due to the father’s hearing loss. After cochlear implants, they arrived at their destination and realized they were having a conversation during the entire trip. “It’s amazing. He told me it’s all these little things you realize you have not heard or done for years, things you used to take for granted that you value most.”

A paper published Feb. 25, “The impact of cochlear implantation on cognition in older adults: a systematic review of clinical evidence,” which includes among its authors Drs. Jacob, Marrone and Mindy Fain, MD, BUMC/UA geriatrics division chief and Arizona Center on Aging co-director, frames the issue. It reviews 3,800 papers on cochlear implants, older adults and cognition, finding no studies specifically evaluating a causal link between hearing rehabilitation with cochlear implants and cognitive function. Since then, a European group has looked into this question and reported the first evidence that such a causative link may exist.

“We felt that the best way to establish causation was to do an intervention study and determine if making people’s hearing better would potentially make measurable cognitive testing on these people better,” Dr. Jacob said.

As such, he partnered with Drs. Glisky and Marrone for the new study. It aims to enlist seniors age 72 or older who have suffered long-term, significant hearing loss. These patients would be assessed by Dr. Jacob as part of a medical cochlear implant evaluation. If deemed candidates for implantation, they would be offered study participation. These patients would undergo pre- and post-surgery cognitive assessment using a comprehensive battery of tests. The tests were developed by the psychology department’s Aging and Cognition Lab to assess what impact improved hearing has on a patient’s cognitive understanding and retention over time. 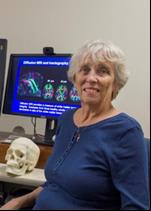 Dr. Glisky said, “Psychology is interested in ways to maintain cognitive function with age or to slow cognitive decline. It's likely hearing loss contributes to cognitive decline, although the exact mechanisms are unknown. There’s virtually nothing known about whether improving hearing through interventions such as cochlear implants might slow or even reverse these declines.”

Recent evidence suggests, she added, that social interaction helps to maintain cognitive function with age, while hearing loss often makes social engagement difficult for older people since they can’t easily follow or participate in interactive conversations. This study explores the potential benefits of cochlear implants, not only for hearing but also for social engagement and cognitive functions, such as working memory and executive control functions.

“I would say it’s very important to look at broader outcomes for hearing rehabilitation and how it can affect cognitive ability for seniors,” she said. “It’s so crucial for older adults to stay connected and engaged in social life as they get older. We’re really interested in ways to support that and healthy aging. That’s one of the things I’m really excited about with this collaboration.”

Dr. Marrone noted their joint paper published in BMC Geriatrics was led by Gina Miller, a clinical audiology student who graduates this spring, and will be the subject of a doctoral dissertation project for Suzanne Moseley, under Dr. Glisky, and James Shehorn, under Dr. Marrone. Dr. Jacob underscores that while other places in the nation may have a larger overall population, most do not have a larger group of healthy, active older adults than Arizona. Therefore, Southern Arizona better fits the model for this type of a study, he said.

“This positions our group well for answering the question whether improved hearing improves cognition among seniors,” Dr. Jacob said. “We have funding in place, students in place and test batteries in place—and we’re just hoping that we can get patients intrigued enough to participate.”

PLEASE NOTE: If you would like to be considered as a candidate for this cochlear implant surgery and cognition study, or know an older adult suffering from significant, prolonged hearing loss that you think would make a good candidate, contact Dr. Jacob’s clinical coordinator, Mary Vidal, (520) 694-2176, to set a medical/surgical office appointment.