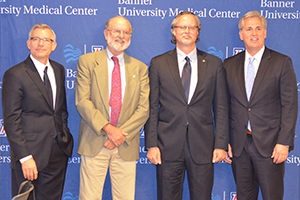 Newspapers in Tucson and Phoenix included articles Oct. 18 on a two-state collaboration of health care specialists for an NIH randomized clinical trial for treating Valley Fever and efforts to develop a vaccine that are led by researchers at the University of Arizona College of Medicine – Tucson.

You can read the articles here:

For more topics on UA Health Sciences in the news, click here. 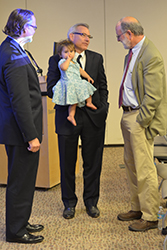 Dr. Galgiani, on right at left, with Rep. Schweikert (center) and Shay Stautz, the Wasington, DC, lobbyst for the University of Arizona. They're joined in the photo above by GOP majority leader, Rep. McCarthy.

They spotlight a $9.7 million National Institutes of Health (NIH) grant to Duke University, for which the UA has a $1.9 million subcontract for the state of Arizona (see DOM news archive article), to test use of fluconazole as an early treatment on Valley Fever victims and collaborative efforts by center founding director John N. Galgiani, MD, a UA professor of infectious diseases, to develop a vaccine for pets and humans. Dr. Galgiani and Ken Knox, MD, chief of the UA Division of Pulmonary, Allergy, Critical Care and Sleep Medicine, are co-principal investigators on the Arizona portion of the grant.

Created in 1996 by the Arizona Board of Regents, the Valley Fever Center for Excellence is leading the way in developing viable treatments to more quickly recognize and possibly cure Valley Fever. That includes development of vaccines, including nikkomycin Z (NikZ), now outsourced to Tucson-based Valley Fever Solutions Inc., for which Dr. Galgiani serves as chief medical officer.  He said the UA also is working with an Irvine, Calif., company, Anivive Lifesciences to develop a vaccine. Grant proposals, he added, have been submitted to the National Institutes of Health for $6 million and the Arizona Biomedical Research Commission for $250,000 to further that work.

“With the majority leader of the GOP coming to Arizona, we’re bringing national attention to this disease and you can credit that to the University of Arizona because of the Valley Fever Center for Excellence and the Division of Infectious Diseases,” Dr. Galgiani said.

Founded in July 2013, the Congressional Valley Fever Task Force consists of a bipartisan group of 11 members of Congress—nine Republicans and two Democrats from California (9), Arizona (1) and Texas (1)—committed to improving awareness, reducing the risk of misdiagnoses, and finding a viable cure. The task force also seeks to raise awareness and initiate dialogue within the medical community about Valley Fever.

Valley Fever, or coccidioidomycosis, is primarily a disease of the lungs commonly confused with pneumonia that’s caused by fungal spores in the soil found largely in the U.S. Southwest and northwestern Mexico. Two-thirds of all reported U.S. cases occur in Arizona and nearly all of those are from a 150-mile stretch of urban areas from Pima, through Pinal and into Maricopa Counties. Kern County, Calif., which includes Bakersfield, rounds out the top four U.S. counties with Valley Fever cases.

Valley Fever is often the second most reported infectious disease for the Arizona Department of Health Services. The U.S. Centers for Disease Control and Prevention tallied 8,232 cases nationwide in 2014. AzDHS reported 7,622 in Arizona alone in 2015. Still, both say those numbers are likely low due to confusion between the disease and common pneumonia.

In other recent developments,