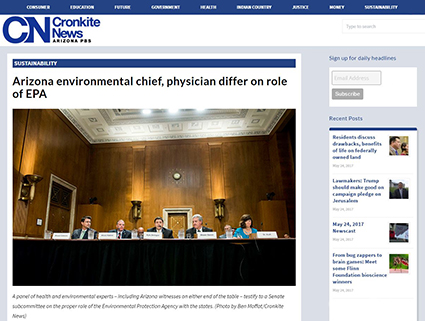 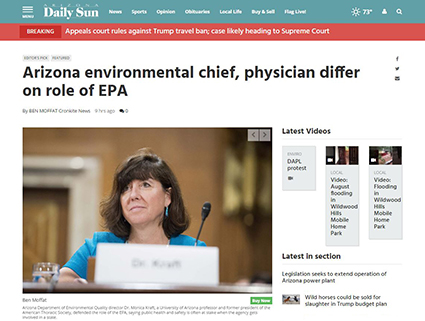 A panel of health and environmental experts—including Arizona witnesses ADEQ Director Misael Cabrera and UA professor and former president of the American Thoracic Society Dr. Monica Kraft, at either end of the table—testified Tuesday to a Senate subcommittee on the proper role of the Environmental Protection Agency with the states. Pictured are articles on the hearing posted by Cronkite News and Flagstaff’s Arizona Daily Sun.

Testimony to a U.S. Senate subcommittee by University of Arizona Department of Medicine Chair Monica Kraft, MD, on legislation that would relax air quality standards stirred up a bit of controversy as reported in an article from Cronkite News, the news division of Arizona PBS in Phoenix, that has been picked up by several other news outlets.

Dr. Kraft—who also is a professor of medicine, deputy director of the UA Health Sciences Asthma and Airway Disease Research Center and the Robert and Irene Flinn Endowed Chair of Medicine at the UA College of Medicine – Tucson—was in the nation’s capital for the ATS 2017 International Conference, the annual conference of the American Thoracic Society.

A noted physician-scientist who specializes in translational research and precision medicine therapies related to asthma, she was president of the organization in 2012-13.

“Both bills would make significant and, in my opinion, unwarranted changes in how EPA establishes and enforces the National Ambient Air Quality Standard for ozone and other criteria pollutants,” she stated. “If enacted, these pieces of legislation would have significant negative impacts on the health of many Americans.”

Cabrera argued for less federal and more state control over environmental regulations. Earlier in the day in comments to the Environment Subcommittee of the House Committee on Science, Space and Technology, Cabrera supported expanding the role of states in EPA rulemaking—click here for video.

A copy of Dr. Kraft’s statement to the U.S. Senate Committee on the Environment and Public works, Subcommittee on Clean Air and Nuclear Safety Subcommittee, can be found at the American Thoracic Society website.

You also can find her appearance along with links to the actual legislation in the Congressional Record. Look for the verbal testimony to be posted here later by searching for hers or Cabrera’s name.

Meanwhile, you can read the original article on this story at Cronkite News as well as the Arizona Daily Sun in Flagstaff. The website Environment & Energy News also published a preview and coverage of the hearing—see “Senators spar again over EPA's ozone standard” (E&E Daily, May 24).

Pictured with Dr. Kraft on the DOM news archive summary for this article is U.S. Sen. Shelley Moore Capito, R-W.V., a member of the Clean Air and Nuclear Safety Subcommittee.

Cronkite News is the news division of Arizona PBS. The daily news products are produced by the Walter Cronkite School of Journalism and Mass Communication at Arizona State University. Cronkite News video by Alex Valdez. The original article was by Ben Moffat.