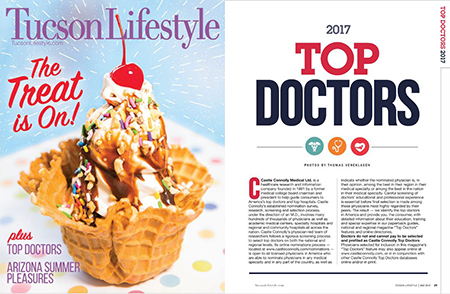 The annual “Top Doctors” list by Tucson Lifestyle magazine is out with its July issue.

Congratulations to the 98* physicians associated with the UA College of Medicine – Tucson who were included among the 2017 Top Doctors. The local list is pulled from a national listing compiled by Castle Connolly Medical Ltd. Those included were nominated by physicians in their medical specialty and selected by Castle Connolly, a healthcare research and information company that screens hundreds of thousands of physicians nationally.

(*Including affiliated community physicians—a UAHS memo did not include these physicians.)

A preview of the list was published here in March with 24 physicians from the UA Department of Medicine included. That list has changed slightly below to include affiliated physicians.

The Department of Medicine is the largest department in the UA College of Medicine – Tucson—with more than 200 faculty physicians, 130 residents training in internal medicine and dermatology, and 70 fellows in advanced training in all its subspecialties.