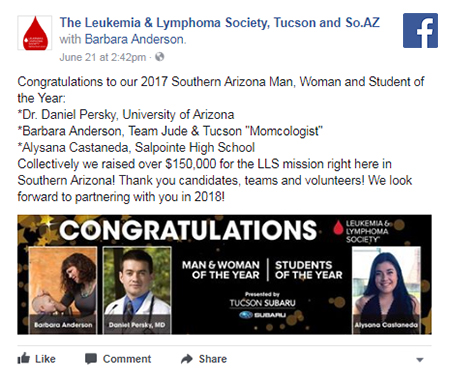 The next time you're headed north, keep your eyes peeled for the colossal image of Daniel O. Persky, MD, which currently greets motorists at Interstate 10 and Sunset Road from its perch atop a billboard there. The signage, which was erected at the end of June, pays tribute to the Leukemia & Lymphoma Society's 2017 honorees -- Woman of the Year Barbara Anderson, Student of the Year Alysana Castaneda, and the University of Arizona Cancer Center's very own Dr. Persky, 2017 Man of the Year.

"It's a great honor," said Dr. Persky, an associate professor in the UA Division of Hematology and Oncology, associate director of UACC Clinical Investigations and director of the UACC Clinical Trials Office. "It cements my commitment to help LLS in its missions."

He competed for this recognition during a 10-week fundraising campaign, in which each dollar counted as a vote. The campaign ended on June 17, when the winners were celebrated at a gala event at the Hilton El Conquistador in the foothills of Tucson. Collectively, the contestants running for the various Person of the Year honors raised more than $150,000 for the Leukemia & Lymphoma Society.

Dr. Persky ran for Man of the Year "to give back to a prominent organization which has supported both my patients with copay assistance, and my colleagues with research grants," as well as "to highlight the tremendous clinical team we have at the U of A Cancer Center taking care of hematologic malignancies. We are the people taking care of all adult acute leukemias in Tucson, and all pediatric cancers."

Dr. Persky wears many hats at UACC, where he is associate director of clinical investigations. He is a prolific principal investigator for the lymphoma clinical research team, heading numerous clinical trials to find better treatments for lymphoma, chronic lymphocytic leukemia, and other lymphoid malignancies. Dr. Persky also serves as associate professor of medicine in the Division of Hematology and Oncology at the UA College of Medicine – Tucson.

UACC excels at both patient care and medical research. As a physician-scientist, Dr. Persky is especially excited about the Cancer Center's research into epigenetic therapy for both B- and T-cell lymphomas, which he is conducting in collaboration with laboratory colleagues. Additionally, he is involved in research into marginal zone lymphoma, which he describes as "an often-neglected slow-growing B-cell lymphoma." Looking to the future, Dr. Persky tells us, "We are also hoping to increase our focus on delivering better care to our older lymphoma patients."

END_OF_DOCUMENT_TOKEN_TO_BE_REPLACED

In other UA Cancer Center news:

H-H. Sherry Chow, PhD, is the recipient of the Distinguished Investigator Award, presented at the 15th Annual Sydney E. Salmon Award Lectures. Dr. Chow is Co-Director of the UACC's Cancer Prevention and Control Program. Her lecture, titled Clinical Development of Cancer Preventive Agents: Lessons Learned and Future Opportunities, was presented to a full audience at the Kiewit Auditorium on May 18, 2017...

END_OF_DOCUMENT_TOKEN_TO_BE_REPLACED

In a letter to Cancer Center members, Dr. Ellis noted, “We are offering two standard, core services. With the gene knock-out service, we remove a sequence, such as an exon or a promoter region, by introducing double-strand breaks flanking the sequence to be removed. We do this by transfecting two guide RNAs and Cas9 protein and then we let the cells repair the breaks by non-homologous end joining. We typically get both heterozygous and homozygous deletions through the process.

“With the gene knock-in service, we change one to several specified bases in the genome by transfecting one guide RNA, Cas9 protein, and a repair template. Some of the cells repair the break by homologous recombination using the repair template. In the process, we also get mutants that repair by non-homologous end joining, which is an error-prone repair mechanism.”

He added, “We can provide this service for any cell line that can be cloned. For specialized cells, the GEF will work with the PI's lab to ensure the culturing methods are appropriate for the cells. In our experience so far, we have not needed to use selectable markers for the knock-out and knock-in technologies. We clone the cells and screen for the DNA changes by standard PCR assays.”

The introductory cost of these services is between $2,200 and $2,500. If you check the price commercial outfits charge, you will find this to be a very competitive price. Additional information is available in a longer article on this topic in the Summer 2017 issue of the UACC Newsletter.