More than 130 high school students, many with parents in tow, came to Banner – University Medical Center South’s La Galería auditorium to hear and learn about the variety of health care jobs offered and how best to prepare themselves for them. 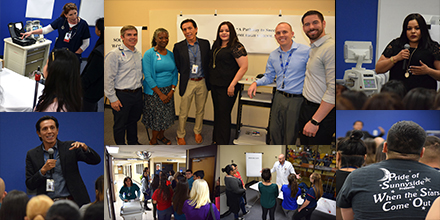 The event, “A Pathway to Success” Health Career Fair for high school students, was the idea of UA Internal Medicine Residency Program – South Campus members Norm Beatty, MD (above middle), and Roberto Swazo, MD. It was made reality, though, with support of Victoria Murrain, DO, assistant dean for Graduate Medical Education at the UA College of Medicine at South Campus, Banner – UMC South Chief Medical Officer David Sheinbein, MD, and numerous others.

On left in top middle photo of image at right, Drs. Sheinbein and Murrain, with Drs. Beatty and Swazo on the right and Dr. Francisco García and ER nurse Norma Mercado, who grew up on Tucson's south side and spoke at the career fair, in the middle.

“It was a smashing success,” Dr. Beatty said afterwards. “The students I was able to talk to during the event seemed pretty excited to be there. I was surprised to hear how many had already been thinking of careers in health care and just needed this opportunity to meet these health professionals.”

For a photo gallery of the evening’s doings, click here.

These include the many pharmacists, nurses, medical assistants, physical and respiratory therapists, radiology techs, nutritionists, social workers, etc., who volunteered their time at booths where they explained to students what they do to provide optimal, compassionate care for the many patients they see day in and day out. Many were able to demonstrate with models to show how to intubate a baby or adult, perform ultrasounds, track medications and more. 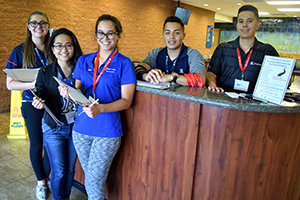 Even pre-med students get in on the act as greeters to arriving high schoolers, parents and counselors. Pictured here (left to right) are Emma Hueter, Shayla Vo, Mia Carvalho Guimaraes, Lazaro Ruiz and Axl Lopez.

Students were greeted at the hospital entrance by pre-med students from the UA Mel and Enid Zuckerman College of Public Health who helped them fill out nametags headed with the phrase, “I am a future health care professional,” then guided them to the cafeteria where dinner was provided courtesy of Banner – University Medicine Food Services contractor Aramark.

Afterward, they filed into La Galería to hear Dr. Beatty welcome them and speak briefly before introducing guest speakers, Norma Mercado, RN, an ER nurse at Banner – UMC South, and Francisco García, MD, MPH, director and CMO for the Pima County Health Department. Both grew up in nearby neighborhoods and studied at the UA College of Medicine and College of Nursing in Tucson.

“As a child, I lived not more than 10 minutes away from here on South 12th Avenue,” Dr. García said. “I can remember being one of the first patients in what was then the new Emergency Room when I had an accident, like many children do, and had to come here. I was one of the first to get stitches in that ER. And I got my first tetanus shot there, too.”

Both he and Mercado encouraged the teenagers to do as well as they could in school and to consider health care careers, but whatever their career choice to never give up and always push to do better for themselves and their families. That included pursuing additional education beyond high school whether at a technical school, community college or university. 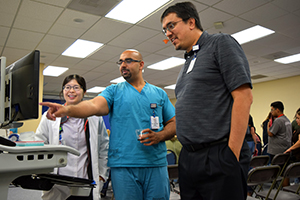 The high schoolers then got to visit 10 different booths and speak with hospital staff in multiple jobs and ask about what they do and how they prepared themselves for the work. Groups also got round-robin tours of the hospital with resident and medical student guides.

Dr. Murrain complimented all the teens in attendance as well as the many volunteers who came together to make Drs. Beatty and Swazo’s idea a reality. She joined the two residents on April 5 to promote the health career fair on KGUN9 TV’s “Morning Blend” program (broadcasts aired April 6).

“What a positive response —I’m just so proud of everyone participating,” she said, then hinted at a repeat performance. “This is just our inaugural Pathways Health Career Fair. We’ll have to do this again.”

“Something I was impressed with was the camaraderie of all the employees and how excited they were to be there to share their experiences and just to give back to community around South Campus. We want to make sure it’s something we do on an annual basis,” he said.

Dr. Beatty offered special thanks to South Campus GME Administrator Jeanne Deinert and Agnes Attakai, a coordinator with the College of Medicine – Tucson Office of Diversity and Inclusion, and director, Health Disparities Outreach and Prevention, College of Public Health, for all their help.