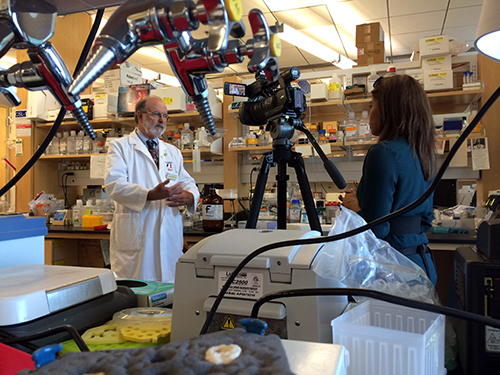 The Valley Fever Center for Excellence (VFCE) at the University of Arizona College of Medicine – Tucson has been awarded a four-year, $4.8 million grant from the National Institute of Allergy and Infectious Diseases (NIAID), a unit of the National Institutes of Health (NIH), for research to combat the sometimes deadly respiratory illness caused by Coccidioides spores found in soils of the U.S. Southwest.

This grant’s aim is to enable development of a live, yet safe, vaccine with the goal of preventing this fungal disease also known as coccidioidomycosis, or cocci, entirely.

Dr. John Galgiani discusses his latest research during an interview in his lab at the UA BIO5 Institute.

“We are very excited to receive this award,” said John N. Galgiani, MD, principal investigator on the project, a UA professor of medicine and the center’s founding director. “This reflects the scientific validity of our plans, and the funds will greatly accelerate the vaccine’s development.”

The live vaccine candidate is known as delta-CPS1 and was invented at the UA. It was developed by a multi-disciplinary team of co-investigators on this and prior grants led by Marc J. Orbach, PhD, a fungal geneticist and UA professor of plant sciences in the College of Agriculture and Life Sciences (CALS), that includes Dr. Galgiani, Jeffrey Frelinger, PhD, UA professor of immunobiology; and Lisa Shubitz, DVM, a VFCE associate research professor with a dual appointment in the College of Medicine – Tucson and the CALS School of Animal and Comparative Biomedical Sciences. The vaccine has already protected mice from Valley fever, but has never been tested on dogs.

The research goal is to test and develop this vaccine to protect dogs from contracting Valley fever. Anivive Lifesciences Inc., a California-based biotech company, has licensed the vaccine from the UA through Tech Launch Arizona and will provide additional investment and expertise to fully develop this dog vaccine. Tech Launch is the UA’s commercialization arm, helping transform UA innovations and discoveries into intellectual property, inventions and technology through licensing agreements with private industry.

Scientists at Colorado State University also are collaborating on this project through CSU’s College of Veterinary Medicine and Biomedical Sciences and the lab of Richard A. Bowen, DVM, PhD. If proven safe and effective in dogs, it’s hoped the next step will be evaluation and possible approval of a vaccine to prevent Valley fever in humans.

“The awarding of this grant to Dr. Galgiani’s group will serve to help us advance the introduction of a vaccine for both man and animals to prevent this truly devastating disease,” said David Bruyette, DVM, DACVIM, chief medical officer at Anivive Lifesciences. 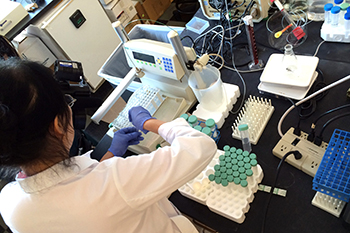 This recent award comes on the heels of a $2.7 million NIH/NIAID grant the VFCE also received for collaborative work to understand the human genetics behind susceptibility to the worst forms of Valley fever, known as disseminated cocci (supported by NIAID under Award No. U01AI122275). That research addresses the question of why some people get so sick from this fungus while other’s immune systems are able to control it, resulting in only a mild illness, if any at all. These efforts could lead to precision medicine solutions specific to an individual at risk and possible new approaches to treatment by immunologic response modifiers.

With more than 90 percent of U.S. human infection cases occurring in California and Arizona, Valley fever (coccidioidomycosis) is the most important fungal public health problem in the Southwest. Each year, valley fever is responsible for 50,000 illnesses and more than 150 deaths, with a cost of half a billion dollars in health care and lost productivity, according to the U.S. Centers for Disease and Control. Current therapies for more severe instances of this disease are not curative and may need to be continued for life.

This research is supported by the National Institute of Allergy and Infectious Diseases s of the NIH under Award Number R01AI132140. The content is solely the responsibility of the authors and does not necessarily represent the official views of the NIH.

NOTE: This release was edited to add names of UA co-investigators on the grant who made up the team leads in development of the delta-CPS1 live vaccine candidate invented at the University of Arizona.