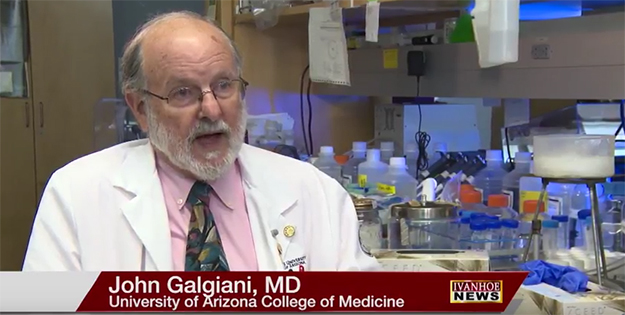 It’s been a busy summer for the founding director of the University of Arizona Valley Fever Center for Excellence, John Galgiani, MD.

With record summer heat drying out soils across the desert Southwest, followed by one of the wettest months of monsoon rainstorms ever in the Tucson area, conditions for respiratory infections from inhalation of Coccidioides spores that cause Valley fever have rarely been so ideal.

Couple that with an article about a significant discovery on the disease’s characteristics in a prominent journal of the Infectious Diseases Society of America (IDSA), a $2.27 million National Institutes of Health grant to study the genetic basis of Valley fever, and a nationally syndicated video update on his research to develop a vaccine for it by Ivanhoe (also on YouTube)—and you’ve got a lot of media buzz. News outlets from South Bend, Ind., to Los Angeles have carried at least 20 stories since July 10.

All of it comes just in time, too, for the 7th International Coccidioidomycosis Symposium being held now (Aug. 10-13) at the Stanford University Medical School in Palo Alto, Calif., where Dr. Galgiani is this week. He and Mayo Clinic Scottsdale's Janis Blair, MD—last year's Annual UA Farness Lecture speaker—presented yesterday on "Clinical Presentations of Coccidioidomycosis," and they will be joined Sunday morning by Neil Ampel, MD, a professor with the UA Division of Infectious Diseases who practices at the Southern Arizona VA Health Care System, and several others for a "Panel Discussion of the New Coccidioidomycosis Guidelines." This symposium, held every decade since the 1950s, brings together doctors and scientists from around the world to discuss the latest developments in our understanding of Valley fever.  “It is an invaluable forum for the exchange of the most recent studies of this disease,” Dr. Galgiani said.

The San Francisco Bay Area’s KQED reported recently a 71 percent jump in Valley fever cases in California over last year. In Arizona, the jump was nearly 36 percent. Both were the largest annual increases since 2011, as reported by the U.S. Centers for Disease Control and Prevention. The two states account for about 96 percent of reported U.S. Valley fever cases, Dr. Galgiani added.

“This is a huge discovery,” Dr. Galgiani said. “It is a very small study—5 patients—but all five had profound reductions in oxygen utilization (all below 10th percentile and two below 1 percentile) to go along with their otherwise unexplained and debilitating fatigue.  This is a brand new discovery.

“We have proposed to the Arizona Biomedical Research Commission that we follow this up with a much larger sample and more detailed physiology of heart, lungs and muscle to identify where in the oxygen delivery circuit is the failure. Many patients with cocci have fatigue. This discovery gives clinicians a way to assess whether there is a physiologic basis and support work releases for their patient if there is.” 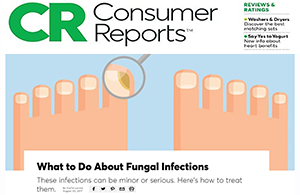 In an article, “What to Do about Fungal Infections,” in Consumer Reports’ August issue, he points out, “People don't realize they're at risk if they simply pass through the Phoenix airport, since they can inhale spores indoors.” 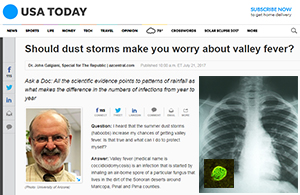 Among other press coverage he’s gotten is an “Ask a Doc” Q&A in USA Today’s July 21 edition and TV broadcasts in Green Bay, Wis., and San Antonio, Texas. Many of the TV segments are based on the Ivanhoe video, which is expected to be broadcast in approximately 50 markets reaching 30 million U.S. households.

To view all “UAHS in the News” stories including those above, click here: opa.uahs.arizona.edu/newsroom/uahs-in-the-news

About the Valley Fever Center for Excellence
In 1996, the Arizona Board of Regents established the Valley Fever Center for Excellence at the University of Arizona in order to address problems created by the fungus, Coccidioides, the cause of Valley fever. The fungal spores are endemic to soils in the region and are responsible for an estimated 150,000 annual cases of the pneumonia-like infection also known as coccidioidomycosis, or cocci. Two thirds occur in Arizona between Tucson and Phoenix. Some cases are mild, some so severe it spreads past the lungs. In about 150 cases, the patient dies. It also affects animals, including pets and livestock. The center works to spread public awareness and education about Valley fever, promote high quality care for the disease and pursue research to improve treatment therapies and develop a vaccine. To learn more, visit vfce.arizona.edu

For the media, UA News also has a webpage—UA Expertise on Valley Fever (Coccidioidomycosis)—available with additional informational, photo and video resources.