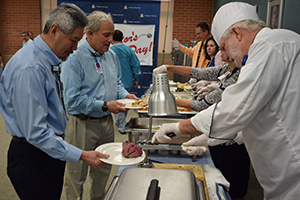 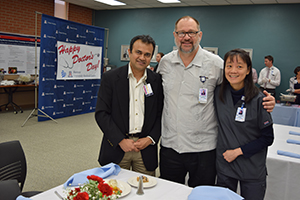 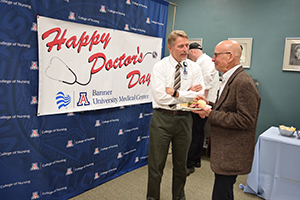 As is the custom nationwide since 1991, when then U.S. President George H.W. Bush officially named the day as a national day of celebration for physicians, Banner - University Medical Center Tucson recognized the physicians with a luncheon held in Room 117 of the UA College of Nursing.

A similar luncheon was held today, March 31, in La Galería at the Banner - UMC South hospital for physicians there. Photo galleries for both events can be found below. See our Twitter post on this @UAMedicineEdu.

Why a National Day of Recognition

The date is significant in that on March 30, 1842, as is pointed out by the American Board of Physician Subspecialties (ABPS), "modern medicine changed forever with the first documented use of general anesthesia in surgery."

The first Doctor's Day observance was March 30, 1933, in Winder, Ga., when Eudora Brown Almond, wife of Dr. Charles B. Almond, decided to set aside a day to honor physicians, according to the National Doctors' Day website: www.doctorsday.org. This first observance included the mailing greeting cards and placing flowers on graves of deceased doctors.

On March 30, 1958, a Resolution Commemorating Doctors' Day was adopted by the U.S. House of Representatives.

Click here [PDF] or in the image at left for a photo gallery from the Tucson campus luncheon.

Click here [PDF] or in the image at left for a photo gallery from the South campus luncheon.