The Pima County Fair will host a joint public outreach effort by Pima County Health and the University of Arizona Petersen HIV Clinics—the latter’s focus being on raising awareness about HIV and AIDS prevention.

The fair—which begins tomorrow and runs through the end of the month (April 20-30)—draws about 300,000 attendees over the two weeks of 4-H competitions, concerts and other mini-events throughout the larger fair.

UA clinic staff—including Andrea Ibarra (on left below left), coordinator for the UA Ryan White Program through which the clinics are funded by the U.S. Health Resources and Services Administration, and 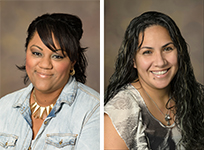 Krystal Fimbres (on right at left), an early intervention specialist with the program, will man a table at the Pima County Health booth.

“We’ll be attending the fair April 21st, 22nd and 23rd, and then again on the 27th, 28th and 29th,” Ibarra said. “We’re collaborating with Pima County Health and Miguel Soto, who’s the coordinator over their Ryan White Program. We’ll have a display and giveaways, including info on PrEP and clinical and other services we offer.”

PrEP, short for pre-exposure prophylaxis, is a highly effective daily medication protocol for people at high risk for HIV to lower their chances of getting infected.

Ibarra added, “We’ll let folks know how to be cautious and just make them aware that this virus is still prevalent and it doesn’t discriminate. We’ll talk about risk factors out there and that they can definitely use PrEP if they fit into that category. And we’ll also discuss PEP—or post-exposure prophylaxis—for a person who may have had or believe they had an encounter with someone who is HIV positive and let them know what steps they can take next.”

Where do you find them? Look for the Pima County Health mobile van next to two tents.

“We’re located kind of on the main drag in front of the Pima Hall near the sea lion attraction,” Soto said. “This is Pima County Health’s third year at the fair and the Petersen Clinic’s first. We’re focused this year on HIV and STDs (sexually transmitted diseases), but we have additional information on Zika virus and WIC (women, infant and children) services—just an array of stuff.”

He added that COPE Community Services, which provides behavioral services that include methadone detoxification, will also share space with Pima County Health. In addition to being the HIV/STD coordinator, Soto also runs the county’s LifePoint syringe access program to reduce spread of disease by those sharing syringes. For more information, visit www.pima.gov/health

It’s that broad demographic mix the clinics, overseen by the UA Division of Infectious Diseases and hosted at the Banner – University Medical Center Tucson and South hospitals, would like to reach, Ibarra said. They would like to diversify their outreach beyond those who are HIV positive, suffering from AIDS or their family and friends to a wider audience who may be at risk from HIV and STDs in general.

“We do meet quarterly with what we call CAB, or our Consumer Advisory Board,” Ibarra said—

click here for CAB brochure. “There’s a meeting tomorrow, in fact. Anyone can join. You don’t have to be HIV positive. We definitely would like to get new members and younger members. We’d like to revamp CAB based on people who want to help raise awareness about HIV and STDs as much as those seeking patient services.” 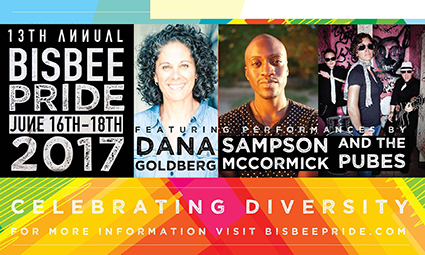 She anticipates tomorrow’s meeting also will focus on plans for an annual meeting likely to be held in June. And, as the Division of Infectious Diseases, also is home to the Arizona AIDS Education & Training Center (AETC)—which provides training to clinical and mental health workers statewide, they’d like to widen representation as well to rural areas.

That’s among the reasons Petersen Clinic staff also will be at the Bisbee Pride festival on June 17.