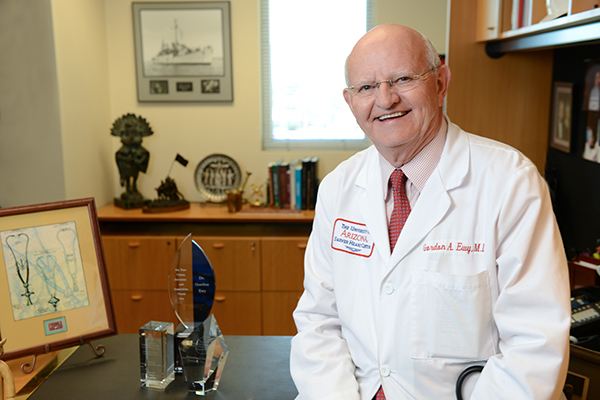 The Georgetown University School of Medicine will award Gordon A. Ewy, MD, a University of Arizona College of Medicine – Tucson professor emeritus in the Division of Cardiology and director emeritus of the UA Sarver Heart Center, a Doctor of Science (DSc) degree at its graduation ceremonies on May 26.

The honorary degree will be presented during the commencement event to be held at the Daughters of the American Revolution (DAR) Constitution Hall in Washington, DC.

The DSc is considered a "higher doctorate" to that of a Master of Science (MS) or Doctor of Philosophy (PhD) degree and is awarded in recognition of a substantial and sustained contribution to scientific knowledge.

Dr. Ewy was a founding member of the Cardiology faculty in 1969 and section chief from 1982 to 2010. He held the Gordon A. Ewy, MD, Endowed Chair in Cardiovascular Medicine from 2002 to 2013. Sarver Heart Center Co-Director Karl B. Kern, MD, currently holds that chair.

As its director starting in 1991, Dr. Ewy oversaw fundraising for as well as design and construction of the Sarver Heart Center building, which was dedicated in 2000. He also spearheaded fundraising for multiple endowments for academic positions at the center, which now has 13 endowed chairs, two endowed fellowships, three endowed professorships and two future endowed chairs set up by annuities.

For his early research contributions to defibrillation and resuscitation Dr. Ewy was designated as an American Heart Association Honoree by the International Conference on Guidelines for Emergency Cardiac Care in 2001—a position referred to as a “CPR Giant” and held by only a few individuals in the world.

The UA Sarver Heart Center was established in 1986. For the past year, it has been celebrating three decades of advanced research into cardiovascular disease and interventional cardiology. This includes the Sarver Heart Center 30th Anniversary Lecture Series, which concludes May 17 in UAHS Room 5403 at 6 p.m. with a double-billed talk by Carol Gregorio, PhD, chair, UA Department of Cellular and Molecular Medicine, and vice dean for innovation and development, COM – Tucson, and Nancy K. Sweitzer, MD, PhD, the center’s current director and Division of Cardiology chief (2013 - ). See the link below for details about the lecture.

Learn more about the center here.