Treatment of Pain Gets Green Light for Clinical Trials

A study by University of Arizona researchers revealed that rats with neuropathic pain that were bathed in green LED showed more tolerance for thermal and tactile stimulus. A clinical trial involving people suffering from fibromyalgia is under way.

Rats were exposed to room light and fitted with contact lenses, one shown here, that allowed the green spectrum wavelength to pass through the lenses. (Photo: Bob Demers/UANews)

It wasn't the first time that Wael, the brother of UA assistant professor of anesthesiology and pharmacology Mohab Ibrahim, MD, PhD, had called complaining of a headache. Dr. Ibrahim suggested that he take some ibuprofen. Wael declined his brother's advice. "No, I'm going to go and sit among the trees, and that will make me feel better," he said.

"It didn't occur to me until recently that Wael's headaches were getting better when he just sat among the trees," says Dr. Ibrahim, 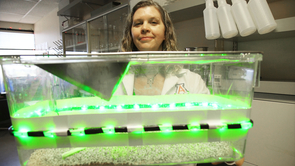 an assistant professor of anesthesiology and pharmacology and director of the Comprehensive Pain Management Clinic at Banner – University Medical Center South.

He was the presenter at the Living Healthy With Arthritis lecture on March 1, “Tame Your Pain ... An Inside Look at Conventional and Alternative Therapies for Pain Management.” The lecture series is hosted by the UA Arthritis Center and Division of Rheumatology.

"Sometimes I get headaches myself, so I go to a park and sit there, and I do feel better," Dr. Ibrahim says. "I thought, why is this happening? It could be because it's quiet. You're meditating, and life slows down, but I can also be quiet in my office, and it doesn't take the headaches away. Then I thought maybe it's the trees. So, I thought about what trees do. They could be releasing some sort of chemical in the air, or maybe it's just their color, green, which is associated with most trees."

He finally decided to investigate whether the color green could mitigate chronic pain. And he decided to do so by exposing rats to green light.

"It seemed like an easy experiment, so that's what we did," he says. 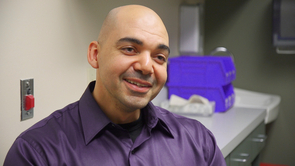 To receive the green LED exposure, one group of rats was placed in clear plastic containers that were affixed with green LED strips, allowing them to be bathed in green light. Another group of rats was exposed to room light and fitted with contact lenses that allowed the green spectrum wavelength to pass through the lenses. 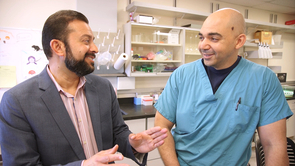 Of note, no side effects from the therapy were observed, nor was motor or visual performance impaired. The beneficial effects lasted for four days after the rats' last exposure to the green LED. In addition, no tolerance to the therapy was noted.

"While the pain-relieving qualities of green LED are clear, exactly how it works remains a puzzle," says Rajesh Khanna, MD, UA associate professor of pharmacology and senior author of the study. "Early studies show that green light is increasing the levels of circulating endogenous opioids, which may explain the pain-relieving effects. Whether this will be observed in humans is not yet known and needs further work."

Which is why the researchers are now conducting a small, randomized, double-blind clinical trial to study the effects of green LED light on people with fibromyalgia, a common source of chronic pain. Participants are provided with a green LED light strip to use in a darkened room for one to two hours nightly for 10 weeks.

So far, the results of the trial look promising. Two participants even refused to return the green LED light because their pain was markedly diminished, and one participant wrote to Dr. Ibrahim telling him how positive the experience was — and asked for the light back. Dr. Ibrahim obliged.

Also of note, the therapy works equally well in males and females, Dr. Khanna says. "There's no lesser efficacy in females, and that's exciting because some medications will have some pain relief and that may be further stratified based on gender," he says.

Todd Vanderah, PhD, professor and chair of pharmacology and co-author of the study, says that novel non-pharmacological methods are desperately needed to help the millions of individuals suffering from chronic pain. The initial results, hinting of green LED altering the levels of endogenous substances that may inhibit pain and possibly decreasing inflammation of the nervous system, are a great breakthrough, Vanderah says. Such therapy is inexpensive and could easily be used worldwide.

At the very least, the researchers are hoping that green LED may be used by itself or in combination with other treatments for pain, Dr. Ibrahim says.

"Chronic pain is a serious issue afflicting millions of people of all ages," he says. "Pain physicians are trained to manage chronic pain in several ways, including medication and interventional procedures in a multimodal approach. Opioids, while having many benefits for managing pain, come with serious side effects.

"We need safer, effective and affordable approaches, used in conjunction with our current tools, to manage chronic pain. While the results of the green LED are still preliminary, it holds significant promise to manage some types of chronic pain."

EXTRA INFO
To learn about the potential commercial impact of the UA's research into green LED light therapy, visit Tech Launch Arizona online: “Tech Blog: Use of Green Light Therapy as an Alternative to Opioids for the Management of Chronic Pain”