First-year med students Kathryn Huber and Mariam Mostamandy share a lot of life experiences, co-lead the UA College of Medicine – Tucson Aging Interest Group and are both headed this summer to UC San Francisco to do geriatrics-related research courtesy of scholarships from the American Federation for Aging Research. They’re the 30th and 31st MSTAR scholars from the UA.
By David Mogollón | Communications Coordinator, UA Department of Medicine
“Over the past 10 years, I have been a mentor (or co-mentor) for over 20 MSTAR students who participated in research programs at Harvard, Johns Hopkins, UCLA, UC San Diego, UCSF and other sites,” said Dr. Mindy Fain. “That’s virtually unheard of. It speaks a lot to the quality of our students and our program. We’re very proud of that.”

Kathryn Huber (above left) and Mariam Mostamandy (above right), first-year medical students at the UA College of Medicine – Tucson are thick as thieves as co-leads this past year for the college’s Aging Interest Group, a student club for those interested in geriatric medicine.

That’s where they bonded and became great friends, they say.

Now, they’re headed this summer to the University of California San Francisco to do geriatrics research courtesy of two Medical Student Training in Aging Research (MSTAR) Program scholarships from the American Federation for Aging Research.

They’ll be paid roughly $2,000 a month to work with mentors in a clinical program that’s rated by U.S. News & World Reports magazine as No. 15 in the country in its Best Hospital Rankings. 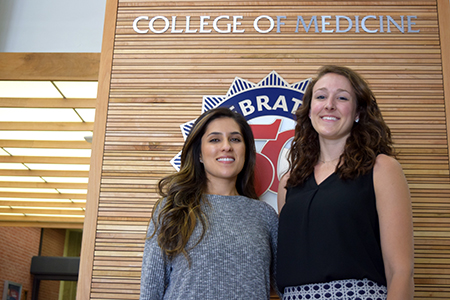 “We’re both very excited,” Huber said. “We’ve kind of been partners in crime. With her and with the Aging Interest Group here, I kind of found out about the MSTAR Program, which was too good to be true the more I looked into it. There are some amazing schools, like ours, associated with it.”

“Over the past 10 years, I have been a mentor (or co-mentor) for over 20 MSTAR students who participated in research programs at Harvard, Johns Hopkins, UCLA, UC San Diego, UCSF and other sites,” said

Mindy Fain, MD (at right and above center), professor of medicine, associate professor of nursing, chief of the UA Division of Geriatrics, General Internal Medicine and Palliative Medicine, co-director of the University of Arizona Center on Aging and the UA’s Anne and Alden Hart Endowed Chair in Medicine.

“That’s virtually unheard of. It speaks a lot to the quality of our students and our program. We’re very proud of that.”

Funding Geriatric Scholars of the Future

Established in 1994 in partnership with the National Institute on Aging, the MSTAR scholarship program provides an 8-12 week experience in aging-related research under the mentorship of top experts in the field. This research intersects many areas of scientific investigation from basic sciences to clinical research to health services research.

Students gain a wealth of experiences they might not otherwise have during medical school, especially early in their training when most scholars participate in the program. This includes targeted exposure to:

Former MSTAR scholars often pursue successful and varied careers in geriatrics and aging-related research—joining a growing number of dedicated scientists, innovative thinkers, and talented physicians whose specialized knowledge and skills in aging are increasing in demand as our population ages.

For Mostamandy, who is from San Jose, Calif., the MSTAR program offers the added benefit of putting her close to home. She said she got interested in geriatrics and palliative care because her father had Parkinson’s disease—the subject of her research this summer. A physician from Afghanistan, he moved his family here after the Soviet Union invaded Afghanistan in 1979. He died when she was in high school.

Her UCSF mentor will be Krys Bankiewicz MD, PhD, Kinetics Foundation Chair in Translational Research and Professor in Residence of Neurological Surgery and principal investigator for the Brain Tumor Research Center and the Movement Disorders Research Program.

“The research I’m going to be doing is in neuroscience on certain proteins in Parkinson’s disease,” she said. “That’s what sparked my interest in medicine. And I’ve had lots of little experiences after that which reinforced it.”

Among those was getting involved with a nonprofit, Empowerment Health (she’s vice president), that trains Afghan community health workers on prenatal and antenatal care. The organization was founded by Johns Hopkins med students when they had an office in Kabul. She started getting involved in 2012.

“That was something I wanted to do to give back because that’s what I saw my dad doing,” Mostamandy said. “He had a free clinic there. He was an OB/GYN. I started getting involved before I actually decided on medicine. It inspired me and, ultimately, led to me choosing medicine.”

At 28, she describes herself as a “non-traditional” student. She did her undergrad studies in anthropology at Santa Clara University, graduating in 2011 at age 21.

“I didn’t decide to go to med school until I was 24, and that’s when I took my first hard-science class ever,” Mostamandy said. “For me, I felt like this was an opportunity to get exposure to research some of my classmates, who were science majors or came straight from undergrad, may already have had. It’s also nice to get exposure to research on this level, how it happens and start making connections with people at other universities and campuses across the country interested in the same thing.”

Here at the UA College of Medicine – Tucson, she tries to get involved more with underserved populations by volunteering at the Shubitz Clinic, which is among the clinical offerings to med students through the college’s Commitment to Underserved People (CUP) Programs and provides culturally appropriate preventive care, primary care, referrals and diagnostic tests to patients with no other source of health care.

“I’ve also gotten involved in artwork with adults with disabilities as therapy,” Mostamandy said. “Along with being part of the Aging Interest Group and Shubitz Clinic, it’s kind of different populations but with kind of the same thread in that these are populations who typically don’t get looked at as often or are as popular in medicine.”

Huber is originally from Tyler, Texas, a small town southeast of Dallas, and has family in Phoenix and Colorado. She did her undergrad studies at Case Western Reserve University in Cleveland and got a master’s in bioethics from Columbia University in New York City.

Her interest in geriatrics also began with her father, who was older. “He was in his 70s when he passed away a couple years ago, so I had an up close and personal look at the aging process and some of the challenges our elderly face and have to overcome. He had heart failure,” she said.

Planning on focusing on geriatrics, Huber worked in hospice and palliative care in her undergrad years and in oncology during grad school, which gave her broader exposure working with the elderly.

“Because of my own personal history, I just felt a very incredible connection with the patients. Their stories, their experiences mattered a lot to me. I found myself gravitating more and more to those patients and becoming interested in the kinds of challenges they faced. I looked for experiences to work more with the elderly, which is what brought me here where the UofA has an amazing Geriatrics division. Dr. Fain is a superstar. We’re so lucky she’s here.”

At UCSF, she’ll be working with hospitalist Andy Auerbach, MD, who is research division director for Hospital Medicine, and Christine Ritchie, MD, MSPH, a palliative care specialist and the Harris Fishbon Distinguished Professor in Clinical Translational Research and Aging in the UCSF Division of Geriatrics. Ritchie will be her primary mentor.

“I’ll be looking at geriatric resource access at hospitals in terms of inpatient facilities, staffing and the variety of services offered,” Huber said. “The initial part of my research over the summer will be to collect data on the kinds of services available and offered in hospitals. In the long run, I hope to be able to work with them on general resource allocation matters for the elderly.”

She noted a convergence with her bioethics studies on decisions we make as a society related to issues such as that resource allocation, informed consent and end-of-life decision-making, etc. “Geriatrics involves a unique patient population and challenges they face in the health system are unique. The way we address them also is going to be unique. These are all things that have very special considerations. UCSF has been one of the first institutions to start to look at those issues,” she said.

The UA is another, Huber and Mostramandy add.