Five years ago, the University of Arizona Department of Emergency Medicine and Division of Infectious Diseases, in the Department of Medicine, sought out a way to make HIV screening a routine part of emergency room culture. Today, with prevention drugs available for at-risk patients and antiretroviral drugs to control infection, that’s more important than ever. After initial concerns by physicians, patients now receive unprecedented access to timely treatment courtesy of the ER and Petersen HIV Clinics at Banner – University Medical Center Tucson and South.
By Robin Tricoles | University Communications
"We started getting unexpected positives," Dr. Brad Dreifuss says. “That's when the physicians became convinced the plan to make HIV screening part of emergency department operations really was making a difference, and that's when the once-perceived hurdles were seen as surmountable."

Shannon Smith (left) and Alyssa Guido are among staff at UA Petersen HIV Clinics, which are operated by the UA Division of Infectious Diseases at Banner – UMC Tucson and South hospitals (Photo: Robin Tricoles/UANews)

People seek care at hospital emergency departments for all sorts of afflictions, be they heart attacks, asthma attacks, auto accidents, broken bones, food poisoning or flu. Others seek care because they fear they may have been exposed to HIV.

Emergency departments, however, can be crowded and have long wait times, and they can be expensive even for those with insurance. What's more, connecting patients to follow-up care can be a challenge, particularly for uninsured patients. But for some without access to primary care, the emergency department is the only care available.

All of which begs the question: What is the best way to care for people who come to the emergency department after having been exposed to HIV, or suspecting so?

Brad Dreifuss, MD, University of Arizona assistant professor of emergency medicine and public health, and his infectious disease collaborators — Shannon Smith and Alyssa Guido — think they may have the answer: Make managing potential HIV exposures and screening for HIV a seamless part of emergency care.

The collaboration between the Department of Emergency Medicine and Division of Infectious Diseases, in the UA Department of Medicine, began in 2012, when the Arizona Department of Health Services asked UA hospitals to expand their HIV screening to include emergency-room patients. As part of the proposition, ADHS funded the Arizona AIDS Education & Training Center (AETC), which is also run by the Division of Infectious Diseases through a federal HIV training and capacity building grant, to work with emergency departments to expand HIV testing. The funding enabled AETC to arm emergency medicine clinicians with the most sensitive HIV test available, one that could detect HIV within two weeks of exposure — much more quickly than older tests could.

Guido, program director of AETC at the UA College of Medicine – Tucson in the Division of Infectious Diseases, and Stephen Klotz, MD, former division chief of infectious disease at the College of Medicine, proposed integrating HIV screening into the emergency department at a Department of Emergency Medicine faculty meeting in early 2013.

Dr. Dreifuss recalls that meeting. After Guido and Dr. Klotz told the faculty that they envisioned making HIV screening a routine part of emergency department culture, the pair initially were met with polite skepticism. 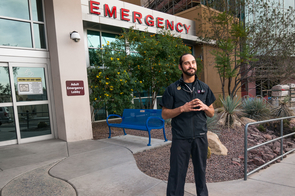 Dr. Dreifuss decided to get to the bottom of the doctors' doubts. He surveyed them all, inquiring about what they perceived as hurdles to implementing such a program. He found that many of the physicians were worried about how much time HIV testing would take to administer, given the emergency department's steady and often-overwhelming patient volume. Clinicians also were concerned about the need to ensure that there is reliable specialized follow-up care for patients who tested positive.

"Typically, if we send for diagnostic testing in the emergency department, it's our responsibility to appropriately address the test results with the patient," Dr. Dreifuss says. "So we needed to ensure there was a safe and efficient way of doing so."

Guido and Dr. Dreifuss worked with Smith, director of special projects with the Division of Infectious Diseases, at the College of Medicine to engineer the link between the Department of Emergency Medicine and the Petersen HIV Clinics, with the aim of making patient care as seamless as possible. Smith develops and oversees clinical programming for the Petersen HIV Clinics, which currently serve more than 1,000 people living with HIV and approximately 125 people who are at risk for HIV infection.

It turned out that 15 to 20 percent of those new diagnoses were acute, which is when the patient is initially sick, most contagious and in need of immediate treatment.

"That's when the physicians became convinced that the plan to make HIV screening part of the emergency department operations really was making a difference, and that's when the once-perceived hurdles were seen as surmountable," Dr. Dreifuss says.

Today, each of the two Tucson Banner – University Medical Center emergency departments tests between 100 and 140 patients per month.

"We're able to follow up with the patients quickly, get them to the clinic quickly and get them access to lifesaving treatments quickly," Smith says.

"Rapid access to anti-retroviral therapy is more effective than if you wait for your immune system to be destroyed by the HIV virus," Smith explains. In essence, if treatment is delayed, the immune system must be "reconstituted," she says. "But if you treat acute HIV, you're not reconstituting the immune system, you're preserving it."

That lifesaving treatment, she says, is key not only to a patient's health but to reducing the chances that the virus is passed along to someone else.

A Need for Prompt Attention

As the collaboration between Emergency Medicine and Infectious Disease flourished, the HIV team identified a need for a more streamlined process for all patients presenting to the emergency department with concerns about possible HIV exposure.

Exposure to HIV through sexual assault, IV drug use, a needle stick, body fluids or unprotected sex is a medical emergency and requires that treatment start within 72 hours of exposure. This treatment, otherwise referred to as post-exposure prophylaxis, or PEP, is a combination of medications taken for 28 days and, if initiated within three days of the exposure and taken as prescribed without missing a dose, is highly effective in stopping transmission of the virus. 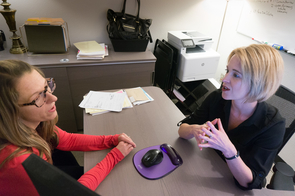 "We started getting calls from people in the community with concerns that they had been exposed to HIV and, at the time, our only option was to refer them to the closest emergency department," Smith says. "On multiple occasions and for a variety of reasons, patients would call us back stating that they were unable to access medical care. As a work-around, we started calling the emergency department to give them a heads-up that the patient was coming in and to offer our support. And then the commotion to ensure the patient could actually access the 28-day course of expensive antiviral medications would begin."

The team worked with multiple departments, including social work and pharmacy, to develop a process to ensure patients could obtain PEP, regardless of their insurance status, and to link them to follow-up care at the Petersen Clinics. In addition to the multidisciplinary collaborations with emergency departments and pharmacies, the Petersen Clinics also developed an internal program to receive non-emergency PEP referrals. The clinic now can provide medical care and counseling during the 28-day treatment period until HIV infection is ruled out.

Now the team is aiming to establish protocols that allow for five days of anti-retrovirals to be prescribed and handed to the patient right in the emergency department — a major breakthrough.

"So, even if it's a holiday Friday and a holiday Monday," Dr. Dreifuss says, "patients will have enough meds for those days until they can get connected to a specialist physician to complete the secondary testing and counseling."

It should be noted that the emergency departments also see patients who have an ongoing risk of being infected through sexual activity with an HIV positive partner, through multiple partners with unknown HIV status or risk factors, or through sharing needles for IV drug use. These patients are treated with pre-exposure prophylaxis treatment, or PrEP, and then linked to a primary care doctor in the community or a nurse practitioner at the Petersen Clinics for follow-up and counseling.

PrEP consists of one pill taken daily for people who are at ongoing risk for HIV infection. The primary component of PrEP is a medication called Truvada. Truvada has historically been used as a medication to treat HIV; in 2012, however, the Food and Drug Administration approved Truvada as a treatment to prevent HIV.

Following the FDA's lead, the Centers for Disease Control and Prevention released their official treatment guidelines two years later.  It was then that the Petersen Clinics decided to launch a formal program to provide the newly recommended treatment to people at risk for HIV in southern Arizona.

In the fight to eradicate HIV transmission, the collaboration between the Department of Emergency Medicine and the Division of Infectious Disease is one that the team sees as a viable model that can be adapted to other emergency care settings, both domestically and even globally.

"As emergency care systems develop globally, the impacts of programs like ours implemented in high-prevalence HIV settings are sure to be even more impressive than what we have seen in the Tucson area," Dr. Dreifuss says.