UA Listed Among Top 100 in ‘World University Rankings’ by Reputation

Times Higher Education's World Reputation Rankings recognize the most prestigious higher-education institutions throughout the world. The appearance on the list is the UA's fourth.

Times Higher Education has recognized the University of Arizona as one of the top 100 higher-education institutions in the world, ranking it as a global leader in research, education and innovation in the 2017 edition of its annual World Reputation Rankings, released in mid-June.

"It's an honor to see the University of Arizona listed among the very best in the world, and it further confirms our reputation as a university that provides students an outstanding academic experience while being a global leader in research and innovation," said UA President Robert C. Robbins, MD. 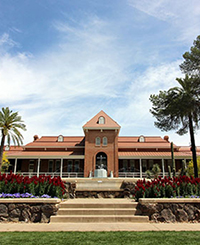 The UA, which appears in the 91-100 range, is among 42 colleges and universities from the U.S. to claim a place on this year's list. Only the top 50 institutions receive an individual ranking.

The World Reputation Rankings are based on an invitation-only academic reputation survey that targets experienced, published scholars who offer their views on excellence in research and teaching within their disciplines and at institutions with which they are familiar.

The survey, which was carried out between January and March, received a total of 10,566 responses from 137 countries. Available in 15 languages, it uses United Nations data as a guide to ensure that the response coverage is as representative of world scholarship as possible. Surveys also are evenly spread across academic disciplines.

"It's clear from this ranking that the University of Arizona brand is strong throughout the world," said Andrew Comrie, PhD, UA provost and senior vice president for academic affairs.

The World Reputation Rankings began in 2011 as a way to measure global brand value of higher-education institutions attempting to attract students, faculty and research funding. Times Higher Education sought to reveal how academics viewed the strength of institutions' teaching and research.

This ranking comes one month after the UA announced a visionary global network to address global demand for higher education by introducing a series of "micro-campuses" that will be capable of educating more than 25,000 international students abroad.

For specifics in the 2017 World University Rankings on the University of Arizona, see: