Trevor Barroero, a Flinn Scholar and University of Arizona senior percussion student in the Fred Fox School of Music, presents a free benefit concert to raise $10,000 for the Alzheimer’s Association. The event, titled “…in loving memory,” is presented in memoriam to his late father and grandmother. 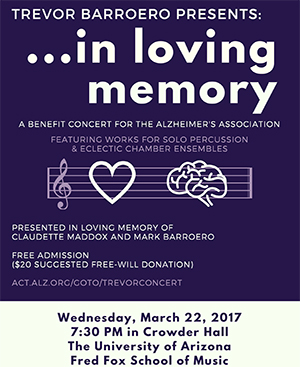 “My father died while I was in fourth grade before I started playing music and my grandmother sort of took over that parental role. She died April 15, 2012, during my senior year of high school,” Barroero said. “She had Alzheimer’s.”

His final solo performance will be at the recital Wednesday, March 22, 7:30 p.m., in the Fred Fox School of Music’s Crowder Hall, 1017 N. Olive Road. There is no charge, but free-will donations ($20 recommended) will be sought before the recital and online at the Alzheimer's Association website: act.alz.org/goto/trevorconcert

A post-concert reception will follow the recital, with catering graciously provided by the Gastronomic Union of Tucson.

“We fully support his efforts to raise money for research into therapies for patients suffering from Alzheimer’s disease,” said Mindy Fain, MD, co-director of the UA Center on Aging, chief of the Division of Geriatric, General Internal Medicine and Palliative Medicine, and the Anne and Alden Hart Endowed Chair in Medicine at the UA College of Medicine – Tucson.

Considered a disease of aging, Alzheimer’s is the most common form of dementia and typically affects people age 65 or older (only 5 percent are younger). Average survival for people diagnosed at age 65 is 8.3 years, but longevity ranges from four to 20 years. A neurologically degenerative disorder, it affects memory, judgment, language, abstract thinking, etc., and causes confusion about time and place. 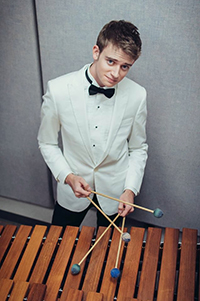 A native of Tucson who attended Oro Valley’s Ironwood Ridge High School, Barroero has had many extraordinary opportunities during his years studying music in Arizona. Most recently, this includes featured performances as a marimba soloist in British Columbia and a guest timpanist of the Moscow Symphony in Russia.

He plans on pursuing a master’s degree after graduating and is weighing five offers from out-of-state music programs.

This exciting event will showcase Trevor on a variety of instruments including the marimba, steel drums, and multi-percussion and will feature collaborations with over 10 different musicians throughout the performance. It will also include the world premiere of a new percussion solo commissioned specifically for this concert.

“Music was, and always will be, a source of healing for me,” Barroero said. “As a passionate and collaborative art form, music can thrive when words fail. It is the tool with which musicians can heal, empower, and communicate with others. For my recital on March 22nd, I have been working hard to find repertoire that will wrestle with the realities of grief while still highlighting the beauty of life.”

He noted that he started drum lessons a month after his father’s death of sudden cardiac arrest. His father (pictured in the left two photos of the collage at the top of this page), he said, was a singer/songwriter and pianist who always wanted to attend music school but never had the financial means to do so.

Barroero said his mother still is his biggest supporter. She and his grandmother raised him and his older sister, Chelsea Barroero (pictured with him above as a child). Since his mother is a full-time oncology nurse practitioner, his “grandma” (in the right two photos, top of page) would drive him all around town for karate lessons, drama classes, baseball practice, and dance and drum lessons.

“I've been very lucky and have had a lot of supporters and great role models throughout my life,” Trevor said.

About the Artist
Trevor Barroero, percussionist, has been the gold medalist of over half-a-dozen concerto competitions, most recently winning first place at the Pacific Region International Summer Music Academy’s concerto competition which resulted in an invitation to travel to Russia this upcoming winter to perform with the Moscow Symphony Orchestra.

Barroero was a selected participant of the Juilliard Summer Percussion Seminar, the Pacific Region International Summer Music Academy, the Vancouver Symphony Orchestra Institute, and, for two consecutive years, he was a participant at the Aspen Music Festival and School.

A Flinn Scholar, Barroero is currently completing his final year of undergraduate studies at the University of Arizona toward a bachelor of music degree in percussion performance. As a National Student Exchange Scholar, Trevor spent the past two years at the University of Georgia studying with Timothy K. Adams Jr., former timpanist of the Pittsburgh Symphony and Kimberly Toscano-Adams, former timpanist of the Tucson Symphony. He is currently a student of the UA’s Dr. Norman Weinberg and Dr. Morris Palter. 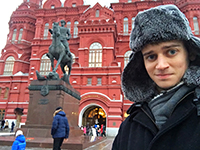