If testimony by UA Professor Lynn Gerald, MD, MSPH, at the Arizona State Legislature on House Bill 2208 were followed public and charter schools would be allowed to stock and administer asthma medication to students during an emergency.

The Legislature agrees and now it’s up to Gov. Doug Ducey to add his signature to the bill.

Dr. Gerald is the Canyon Ranch Endowed Chair and Professor in the Department of Health Promotion Sciences in the Mel and Enid Zuckerman College of Public Health at the University of Arizona. She’s also associate director for clinical research for the UA Health Sciences Asthma and Airway Disease Research Center.

As a member of the Arizona Asthma Coalition, she testified before the Arizona House of Representatives Committee on Health on Feb. 2 on the value of allowing schools to stock albuterol inhalers for students with asthma. The legislation makes that possible by shielding trained school personnel in both public and charter schools from lawsuits for dispensing aid. It’s similar to a previous bill passed in 2013 regarding use of epinephrine injection auto-injectors, known as EpiPens, for emergency treatment of anaphylaxis, or acute allergic reactions.

In her comments, Dr. Gerald noted that coming to the assistance of a child in respiratory distress is one of the most frightening things for school personnel.

“Over one in 10 children in the United States have asthma and each year more than half of these children experience a sudden attack which makes it difficult for them to breathe. These attacks will lead to more than 750,000 emergency room visits and 200,000 hospitalizations. Unfortunately, up to 200 children will die each year after such an attack,” Dr. Gerald said.

About 80 percent of the time, a student may not have an inhaler with them to provide the medication that relieves the blockage in their lungs. Reasons may include they forgot it at home, in a backpack or coat, or it unexpectedly ran out. Yet inhalers are easy to administer and incredibly safe and school personnel—not just nurses—should be able to provide them in such emergencies, she added.

Dr. Gerald was featured in an article on the COPH website March 1 and another by Cronkite News/Arizona PBS on March 15.

The COPH article notes that HB 2208—sponsored by State Rep. Heather Carter (R-Dist. 15), is modeled after SB 1421, Arizona’s EpiPen law, signed into law in 2013, which allows schools to stock and administer epinephrine for emergency use creating a safer environment for all school-aged children, especially those who may not yet know they are allergic.

You can hear Dr. Gerald’s comments in this video: http://azleg.granicus.com/MediaPlayer.php?clip_id=18573 (click on HB2208 link to jump to testimony on that bill).

The Cronkite News article points out that 11 percent of Arizonans age 18 and younger—or about 175,000 children and young adults—have asthma, according to the most recent data. It also provided a graphic on the number of ER visits and hospitalizations involving that age group shown below. 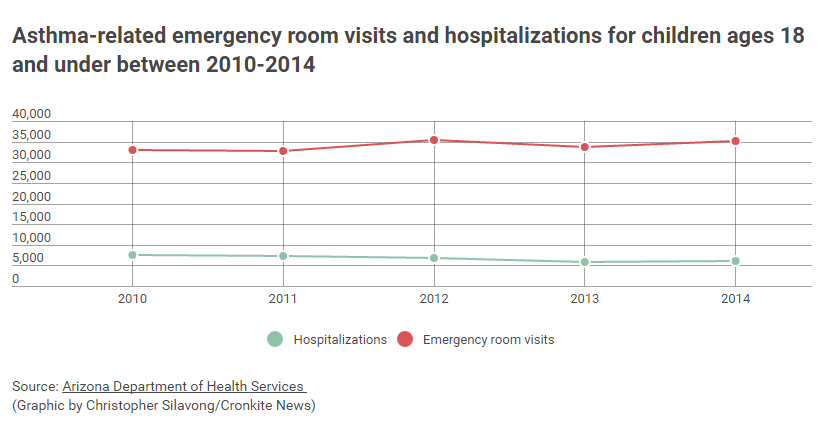 “An inhaler is just a way to deliver medication to the lungs,” Dr. Gerald said, in the Cronkite News article. “It’s a short-acting medication. When children have an asthma attack, it releases the muscles around their lungs and allows them to breathe.”

School nurses could easily administer such medication under current state law, but most schools don't have nurses and non-licensed personnel (which is what most school health offices have) are not allowed to dispense prescription medication.

Under the new law, schools would need to notify parents at the beginning of the school year that they have stock inhalers and that the inhalers could be administered in an emergency for their child.