PHOENIX — Doctors can misdiagnose Valley fever, a fungal disease that lurks behind such common symptoms as coughs, headaches and fatigue, because they’re not familiar with the respiratory disease, medical experts say. That could prolong patient suffering and even result in death.

Misdiagnosis not only hinders recovery, it can worsen Valley fever, said John Galgiani, MD, director of the University of Arizona Valley Fever Center for Excellence and a professor of medicine in the Division of Infectious Diseases at the UA College of Medicine in Tucson. He’s scheduled to speak about the dangers of the fungal disease Sunday at the Association of Health Care Journalists 2018 national conference in Phoenix.

“One of the reasons clinicians are not as familiar with this as they should be is because they don’t train here,” Galgiani said, noting that Valley fever – also known as coccidioidomycosis – is regional.

In 2016, the U.S. Centers for Disease Control and Prevention received more than 11,000 reports of Valley fever, which strikes people with fatigue, coughing, fever and headaches that last weeks, even months. About 6,000 reports were from Arizona, and more than 5,000 from California – the two states where the vast majority of Valley fever cases occur. But tens of thousands of cases likely go unreported, CDC epidemiologist Orion McCotter, MPH, said.

One percent of patients may have the disease move to other parts of their body, infecting blood, bones and organs, and 5 to 10 percent may have severe respiratory problems, resulting in even more aggressive respiratory issues and fatigue, McCotter said.

The symptoms and complications result in about 100 to 150 deaths a year, he said, but even the nonfatal consequences of the disease can be disruptive. About 75 percent of patients might miss up to two weeks of school or work, McCotter said.

The issue, ultimately, lies in treatment rather than prevention.

“This is a fungus that lives in the environment,” McCotter said. “It’s difficult to prevent.”

Misdiagnoses often are due to Valley fever’s routine symptoms.

“They look like a lot of other respiratory diseases,” McCotter said.

Galgiani said the Phoenix area’s draw for newcomers means patients and physicians often are from parts of the country where Valley fever is virtually unknown. Census estimates show 222 people moved to Maricopa County each day in 2016 and more than 100,000 newcomers moved to Arizona last year.

McCotter said Coccidioides, the fungus that causes Valley fever lives, in a specific kind of soil found almost exclusively in California and Arizona. But as more people move to and from those states, carrying dust and items that may contain the fungus, the geographic range of the disease is expanding. 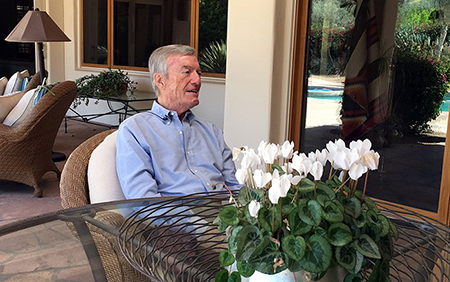 Jim Meenaghan (left), who has lived in Phoenix for nearly 20 years after living in New York City and San Francisco, said he had heard about the disease shortly after moving to Phoenix “in a very vague way.”

Time is lost and the patient gets worse,” valley fever patient Jim Meenaghan said of physicians’ unfamiliarity with the disease. (Photo by Tristan Ettleman/Cronkite News)

Eight years ago, he learned about it the hard way, as a patient.

Meenaghan said his situation is an example of a Valley fever diagnosis that can go right. He had been experiencing splitting headaches and high fevers, which his doctor initially treated with a “heavy dose” of antibiotics. When Meenaghan returned three days later, his doctor could tell the antibiotics hadn’t worked.

“Holy expletive, this is getting worse,” Meenaghan said.

But his doctor knew to test for Valley fever, Meenaghan said. Six months later, he was free of the disease. The issue isn’t with the treatment, he said, “The real problem is a communication problem.” he said.

Still, Meenaghan said he hopes for a vaccine that can speed up the lengthy process he went through.

He added that a vaccine being developed at the University of Arizona, where the Valley Fever Center is based, is promising. In the meantime, though, programs conducted by UA, the Arizona Department of Health Services and the CDC can spread the awareness necessary to mitigate the problems caused by Valley fever.

“I think it can also be a stepping stone,” Galgiani said.

NOTE: The above article first appeared April 12 on the Cronkite News website. It is used by permission here.

NOTE TO MEDIA: For educational pamphlets, brochures, images and graphics related to Valley fever—as well as contact information for University of Arizona faculty knowledgeable about the illness—visit the following webpage: UA Expertise on Valley Fever (Coccidioidomycosis)