Enzyme's Movement May Be Key to New Cancer Drugs

Interfering with the motion of a kinase enzyme might be a new approach for the development of anti-cancer drugs, new UA-led research suggests.
By Mari N. Jensen | Senior Science Writer, UA College of Science
"Kinases are one of the major cancer drug targets," said Dr. Wolfgang Peti, a UA professor of chemistry and biochemistry, and member of the BIO5 Institute and the UA Cancer Center. "If you know how a kinase works, you can definitely better design your drugs against it."

Revealing all the steps required to activate an enzyme called a protein kinase may identify new ways to target cancer, according to new University of Arizona-led research.

Not only must the kinase have all needed parts in place, the enzyme must move in the correct manner and at the correct speed to function properly in a cell, the researchers found. 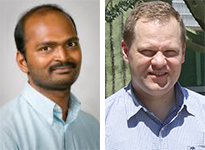 First author Senthil K. Ganesan, PhD (on left at left), a UA research assistant professor in the Department of Chemistry and Biochemistry, said kinases are switches that turn certain cellular processes on or off. If a cell's kinases stopped working, the cell would die.

The UA-led team is the first group to figure out the full pathway for activating a protein kinase, said senior author Wolfgang Peti, PhD (on right, above left), who holds the Homer C. and Emily Davis Weed Endowed Chair in Chemistry at the University of Arizona.

"Kinases are one of the major cancer drug targets," said Peti, who is also a member of the UA BIO5 Institute and the UA Cancer Center. "If you know how a kinase works, you can definitely better design your drugs against it."

Developing a drug that takes advantage of this new research finding is likely to take at least 10 years, he said.

Cancer drugs already in use that target kinases are dasatinib and imatinib for chronic myeloid leukemia and afatinib for non-small cell lung carcinoma, Ganesan said. 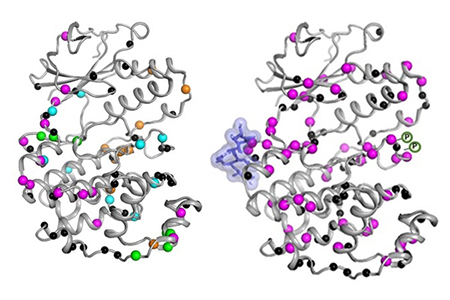 The inactive form (on left at right) of the MAPK p38 enzyme moves in an uncoordinated fashion. Once the necessary molecules (blue blob and P symbols) bind, the enzyme becomes active (right) by moving in a coordinated fashion to do its job inside a cell. (Credit: Senthil Ganesan, UA Department of Chemistry and Biochemistry)

All necessary molecules had to bind to p38 for the enzyme to become active. Only then could the enzyme move correctly to do its job in the cell, the researchers found.

"We figured out how it moves to do its job and what is the contribution of speed of movement to its job," Peti said.

The finding suggests a new avenue for developing anti-cancer drugs could be creating drugs that interfere with p38's movement, he said.

"We are excited because this kinase belongs to a family of kinases that are called MAP kinases — key signaling kinases that regulate a plethora of pathways (within cells)," he said.

Peti said the new finding might apply to other kinases. He said the many kinase enzymes in the body are very similar and likely have similar paths to activation.

Ganesan, Peti and their co-authors published the paper, "Dynamic activation and regulation of the mitogen-activated protein kinase p38," in the May 1 issue of the Proceedings of the National Academy of Sciences (PNAS).

An oft-used analogy for how enzymes work is that of a lock and a key. A particular molecule, the key, fits into a site in the enzyme, the lock. Once the key is in the lock, the enzyme can start working.

The key-in-the-lock is necessary for an enzyme to work, but activating an enzyme isn't always so simple. Some scientists have suggested that dynamics — the way and speed at which an enzyme moves — is important for activating kinase enzymes.

Peti is interested in how molecules such as kinases govern processes with cells, so he wanted to investigate the role that dynamics play. Learning more about how molecules function inside cells can help develop targeted drugs to combat cancer and other diseases.

Figuring out the role that dynamics plays in the activation of p38 was more difficult and took longer than he expected.

The tool scientists use to watch an enzyme in action, NMR spectroscopy, is harder with a large molecule like p38. In addition, the team had to develop new computer software to analyze the results, Peti said.

"If you think it’s a five- or six-step process to go from zero to 100, we thought that at steps zero, one, two or three, we would get indications or guidelines," Peti said.

That didn’t happen. He said the researchers thought about giving up.

"Nothing was working, and it looked as if our hypothesis was completely wrong," he said.

Once all those steps had been completed, although the shape of p38 didn't change, its dynamics did, he said — and that final change in dynamics was required for the enzyme to work.

The team's next step, Peti said, is seeing whether the motion of kinases plays a role in diabetes.