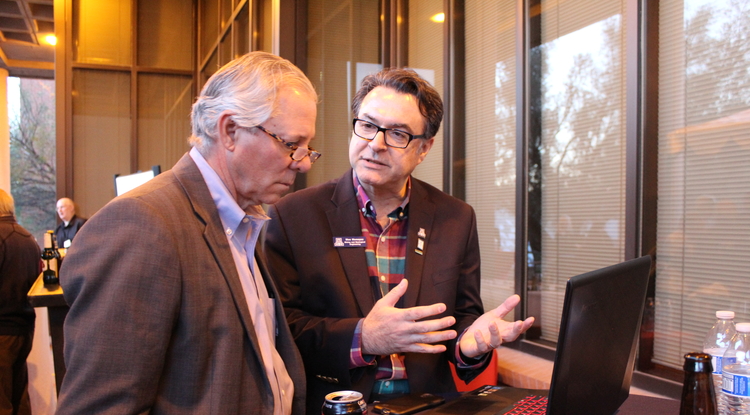 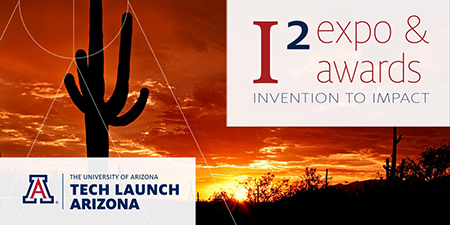 Louise Hecker, PhD, a respiratory scientist with the University of Arizona Department of Medicine, was among 16 individuals or business startups assisted by Tech Launch Arizona (TLA) recognized March 19 at the I-Squared Expo & Awards hosted by TLA, the research and innovation commercialization arm of the University of Arizona. The fifth annual event honors those whose work impacts the quality of life for people in Tucson, Arizona and the world through research, collaboration and invention.

"This event is a wonderful way to showcase the incredible talent we have here at the University of Arizona and to encourage other UA inventors to work with TLA so their work can reach its maximum potential," Dr. Robbins said. "The UA's future impact depends on turning discoveries into products, processes and goods that will benefit all of us and help drive Arizona's economy. I am so impressed with all the award winners this year and grateful for the work they are doing."

TLA, an office of the UA, works with the University community and brings together members of the innovation ecosystem to commercialize inventions stemming from research. Ultimately, the goal is to bring new technologies to the world, where they can spawn startups, create jobs and improve the quality of life.

"We created this event in 2013 as part of our original vision for TLA," said Doug Hockstad, TLA's assistant vice president. "As we build this ecosystem, it's essential that we highlight the work going on at the UA and recognize the contributions of our greatest champions to not only honor that work, but to help inspire others to engage in the mission of bringing the benefits of UA research to the public."

In September 2017, Louise Hecker, PhD—recognized at this year's Tech Launch Arizona I-Squared Awards—won a $4.35 million, three-year U.S. Department of Defense (DoD) grant* as principal investigator for a study, “Preclinical Development of Small-Molecule Inhibitors Targeting Nox4 for Pulmonary Fibrosis” to continue her work on development and evaluation of drug candidates for their effectiveness in regulating idiopathic pulmonary fibrosis (IPF).

IPF is a “disease of aging” that causes a rapid decline in respiratory function due to progressive scarring of lung tissue. According to the Pulmonary Fibrosis Foundation (PFF), IPF affects one of every 200 U.S. adults—largely men—over age 65, with 50,000 new cases diagnosed and up to 40,000 people dying from it each year.

* This work was supported by the Office of the Assistant Secretary of Defense for Health Affairs, through the Peer Reviewed Medical Research Program under Award No. W81XWH-17-1-0443. Opinions, interpretations, conclusions and recommendations are those of the author and are not necessarily endorsed by the U.S. Department of Defense.

The expo and awards ceremony highlighted key individuals and organizations that have made significant contributions to the UA innovation ecosystem: 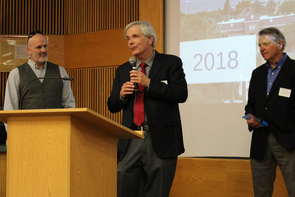 Dr. Walker, a professor at the Department of Astronomy and Steward Observatory, specializes in galactic astronomy, star formation and instrumentation. In 2016, his Stratospheric Terahertz Observatory team successfully launched the STO from McMurdo in Antarctica. His work has led to the development of a number of inventions — including a new inflatable, space-based communications antenna — that are being brought to the world (and beyond) via the startup FreeFall Aerospace. 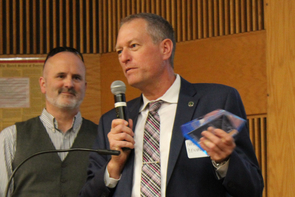 Dr. Zenhausern is professor and director of the Center for Applied NanoBioscience and Medicine at the UA College of Medicine – Phoenix. He has worked closely with TLA on the protection and commercialization of the Human-Microbial Cross-Talk model, or HuMiX, designed and prototyped at the center. With this organ-on-a-chip technology, researchers can analyze the complex interactions between human cells and the microbial ecosystems of the gut. He has been the lead inventor on 26 technologies and contributed to three others brought to TLA. 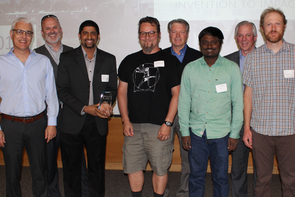 Startup of the Year: Codelucida

The Codelucida team receives the award for Startup of the Year.

The Codelucida team consists of CEO Shiva Planjery, PhD, along with his co-founders and doctoral advisers, Bane Vasic, PhD, UA professor of Electrical and Computer Engineering, and David Declercq, PhD, professor at the ENSEA in Cergy-Pontoise, France. Commercializing a new error-correction technology for data storage and communications, the team has worked closely with TLA since it launched the company in 2014. Planjery's dissertation research gave rise to the invention, and the team has since secured more than $700,000 in angel investment funding, a $150,000 Phase 1 SBIR grant and a $750,000 Phase 2 grant — the latter two coming from the National Science Foundation. 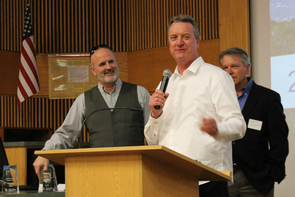 Roger Miesfeld, head of the Department of Chemistry and Biochemistry in the College of Science, receives the award for Campus Collaborator of the Year.

Under the leadership of Professor Miesfeld, the UA Department of Chemistry and Biochemistry has set the standard for engagement in commercialization activities. Because of the department's focused effort on finding applications for research, it has demonstrated greater dedication to invention and commercialization than any other department at the University. 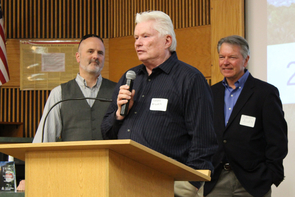 Named a "Tucson visionary" by Inside Tucson Business magazine, McCusker was born in Tucson and is a UA alumnus. In 2013, he collaborated with TLA and Kevin Boesen at the College of Pharmacy to launch TLA's first startup, SinfoníaRx, which was acquired in 2017 by a large digital health care company. Following on that event, he co-founded UA Venture Capital that same year with SinfoníaRx CFO Michael Deitch. UA Venture Capital is a Tucson-based investment fund directed toward helping finance startups emanating from UA faculty research and innovation, as well as student and other UA-connected enterprises. 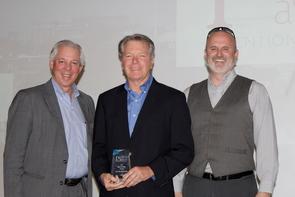 Hockstad surprised Allen, TLA's vice president, by presenting him with the inaugural David N. Allen Award, named in Allen's honor. Described as an award for "leadership and vision," the honor will be given in the future to exceptional individuals who bring those qualities to bear in support of UA technology commercialization. Hockstad will succeed Allen, who is retiring in late April after six years with TLA.

The I-Squared event also included a showcase of several of the top startups, inventions and inventors from across the UA:

"As we keep focusing on building the UA innovation ecosystem, we need to glance back and honor and learn from our greatest contributors," Allen said. "That's how we'll keep inspiring people to engage in this mission in the future."

For the latest information on commercialization efforts for innovations from the University of Arizona , visit the Tech Launch Arizona “News” webpage.