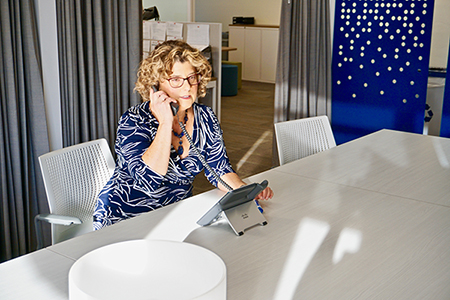 The University of Arizona has more than 15,000 faculty and staff – the majority of whom spend significant portions of their workdays in office settings.

Over the last two decades, an emerging field of research has looked into how these office settings impact health and well-being. While the specific goals and methodologies of these studies have differed, the general conclusions are similar: Traditional office environments have a dramatic impact on a person's health.

Dr. Esther Sternberg, director of research at the Center for Integrative Medicine, sits at a desk in the center's new offices on Alvernon Way. The space's design includes research-driven features – like large windows to let in sunlight – to improve the health and well-being for people working in office settings. (Photo: Melissa J. Garlej/UA Center for Integrative Medicine)

"Most people spend up to one-third of their weekdays at their places of employment, but we've found that the vast majority of these people aren't aware of the stress responses that are related to their work environment and physical activity," said Esther M. Sternberg, MD, a professor of medicine and psychology at the UA and director of research at the UA Center for Integrative Medicine, which is affiliated with the UA Division of Integrative Medicine. It is one of 14 divisions in the UA Department of Medicine, which is one of six original and the largest department at the UA College of Medicine – Tucson.

Dr. Sternberg is also the founding director of the UA Institute on Place, Wellbeing and Performance. Her interest in the relationship between place and well-being evolved from her work on the science of the mind-body connection, which she began in the 1970s as a rheumatologist in Canada. Her career path eventually led her to the National Institutes of Health, where she spent more than 26 years in a number of leadership capacities. 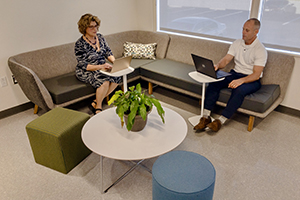 In 2000, Dr. Sternberg was contacted by the then-director of research for the U.S. General Services Administration – the agency that builds and operates more than 370 million square feet of office space, housing more than 1 million federal workers. He asked if she and her colleagues at the NIH could help him draw connections between health, performance and office environments. In these initial studies, they used devices worn over several days to track heart rate variability and collected salivary cortisol throughout the day to measure stress responses in federal office workers transitioning into retrofitted space with improved workplace conditions.

The original work setting was what Dr. Sternberg called a "dark maze cubicle farm" with loud mechanical noise, poor ventilation and a lack of natural lighting. The retrofitted office space in the same building featured some of the first open-office concepts, with light, airy spaces, better air flow and lower levels of mechanical noise.

"People were not subjectively aware they were stressed," Dr. Sternberg said. "We gave everyone questionnaires during our research and, when asked about their stress levels throughout the day, they simply had no idea. The data told a different story, however."

To her surprise, the researchers were able to find significant, almost immediate reductions in stress responses in the people in the retrofitted spaces compared with those in the legacy spaces – not only at the office, but also when the employees went home at night, and even while they were sleeping.

The new Postdoctoral Affairs office and postdoc association connect postdoctoral scholars with resources – and each other. Both resulted from the work of Jenny Hoit, PhD, a professor of speech, language and hearing sciences, whose time as a postdoc led her to improve the postdoc experience. "We're a Research I university and the work postdocs do contributes significantly to that status," she says…

END_OF_DOCUMENT_TOKEN_TO_BE_REPLACED

"You take your work home with you – in more ways than one," Dr. Sternberg said.

Her research caught the attention of Andrew Weil, MD, and Victoria Maizes, MD, with the UA Center for Integrative Medicine, and that of the then-dean of the UA College of Architecture, Planning and Landscape Architecture, who jointly recruited her to the UA. Dr. Sternberg joined the UA in 2012 as the founding director of the UA Institute on Place, Wellbeing and Performance, where she is leading a variety of efforts to tie empirical, objectively measured data relating office environments to people's health and well-being.

In August, Dr. Sternberg and Casey Lindberg, PhD, a psychologist and architect and former research associate with the Institute on Place, Wellbeing and Performance, who now works as a senior design researcher at HKS Inc., co-authored a study with their GSA colleagues and collaborators across the UA and the Baylor College of Medicine, which found that workers in open office seating had greater daytime activity levels and lower after-hours stress levels, compared with workers in private offices and cubicles. Once again, workers were not subjectively aware of these differences. 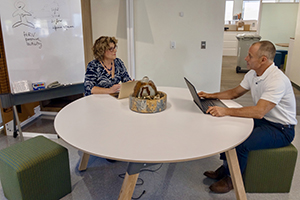 "We had no idea the amount of attention this study would generate," Dr. Sternberg said. "It turns out people have a lot of very strong opinions about their work environments."

She said that proponents of open office settings enjoy the increased face-to-face contact with their co-workers and increased sense of collaboration. Detractors tend to find these open arrangements distracting, making it difficult to focus.

Dr. Sternberg notes that it's a delicate balancing act between the cumulative health benefits and these perceived external distractions.

"Offices need to be constructed in ways to accommodate all types of styles and preferences, keeping in mind where the loudest, high-traffic areas tend to be in relation to personal space," she said. "Thoughtful designs need to work hand in hand with health and activity considerations."

To that end, many of the UA's newest construction projects incorporate a variety of Dr. Sternberg's concepts into their designs. In fact, the UA Center for Integrative Medicine's new facility on Alvernon Way south of Speedway Boulevard features many of these architectural innovations into its design. It moved along with the institute to the new location in May.

"We're fortunate to work at a place where there is such a close collaboration between the colleges of medicine and architecture," Dr. Sternberg said. "I'm encouraged by the direction I've seen from the new construction projects throughout campus."

For UA employees who work in office settings that haven't made the leap to fully open concepts, there are a number of ways to increase activity and improve overall well-being.

Standing desks don't solve every issue relating to workplace inactivity, but Dr. Sternberg says they are a significant step in the right direction. In place of a standing desk, Sternberg advises people to set alarms reminding them to get up and move every 15-20 minutes.

People aren't at their best – intellectually or emotionally – when they haven't seen sunlight for extended stretches during daylight hours, Sternberg said. She encourages people to orient their offices in ways that allow them to be as close to windows and full-spectrum light as possible. Scheduling brief, brisk outdoor walks – weather permitting – makes for a more productive overall day.

Muscle stiffness and joint pain can linger in the background of the workday without occasional breaks to interrupt one's chair-bound monotony. The Mayo Clinic offers a series of workplace stretches that don't require any additional space or equipment, and this piece on Lifehack outlines a variety of energy-boosting movements.

"Add up every single day of your working life and these small, incremental improvements on a daily basis truly add up to a much happier, healthier life. You can even begin to think of your office as your new gym," Dr. Sternberg said.