University of Arizona researchers Drs. Bhaskar Banerjee, a gastroenterologist, and Rongguang “Ron” Liang, in optical sciences, have invented a dual-view probe for medical endoscopy demonstrated to increase polyp detection rates 58 percent to 98 percent. Their startup, Omniscient, is working to bring the technology to the marketplace to aid patients who may suffer from colon cancer. Other uses are being explored.
By Paul Tumarkin | Sr. Manager, Marketing & Communications, Tech Launch Arizona
“We are using instruments that evolved out of the telescope to look forwards,” Dr. Banerjee said. “That’s fine if you’re looking for something in front of you. But, once you get inside the human body, it has some shortcomings. The need is to look sideways and backwards.”

Tucson Ariz. – Inventors at the University of Arizona have formed a startup, Omniscient LLC, and licensed a technology from the University through Tech Launch Arizona (TLA), the UA office that commercializes inventions stemming from research. Omniscient will commercialize a new endoscopic device that provides views that are not possible with current endoscopes. 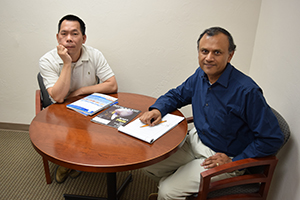 The Invention: A Dual-View Probe

This new probe provides clinicians with multiple fields of view simultaneously to address the shortcomings of traditional endoscopes. Drs. Banerjee and Liang have formed a company, Omniscient, LLC., to bring this technology to the public.

The invention provides a simultaneous forward and 360-degree rear view in a single display. In the colon, it permits doctors to see forwards and backwards at the same time and see behind approximately 100 folds in a typical colon. The result is an imaging system that allows growths that are normally not seen by traditional forward-viewing endoscopes to be detected and removed, identifying more pre-cancerous polyps to prevent many more cancers than conventional endoscopes.

Colonoscopy is the preferred procedure for colon cancer screening. It is estimated that over 14 million colonoscopies are performed in the United States each year, at a cost of $24 billion. Studies have shown that 25 to 40 percent of pre-cancerous polyps are missed during a colonoscopy; over 70 percent of the missed polyps are hidden behind approximately 100 folds in the colon. Banerjee, a gastroenteroligist and past chief of the UA Division of Gastroenterology and Hepatology, has spent most of his academic life trying to find optical techniques of seeing lesions in the gastrointestinal tract that are "invisible" to the human eye because they are flat and have the same color as the surrounding normal tissue. But there is another, more fundamental, problem: not being able to see the entire colon.

Drs. Banerjee and Liang estimate that a standard endoscope at best sees 80 percent of the colon, leaving about a fifth of it unexamined. A "normal" colonoscopy may not be as normal as is commonly believed, and missed lesions can lead to unexpected cancers. This is now widely recognized and benchmarks for polyp detection rates have developed, for individual physicians to monitor. Soon reimbursement for colonoscopy, as well as patient referral, will be impacted by such quality metrics. Therefore, the commercialization of this invention could not have been timed better.

“We are using instruments that evolved out of the telescope to look forwards,” Dr. Banerjee said. “That’s fine if you’re looking for something in front of you. But, once you get inside the human body, it has some shortcomings. The need is to look sideways and backwards.” For years, there was no solution to this problem until Banerjee's serendipitous collaboration with Dr. Liang led to an idea, followed by an optical design by Dr. Liang that led to a proof of concept device. The technology is now evolving rapidly towards a completely new and highly affordable method of imaging in medicine—with additional uses being explored by the inventors beyond medical needs.

"It’s been wonderful to work with Dr. Banerjee and Dr. Liang on this project,” said Amy Phillips, TLA licensing manager for the College of Optical Sciences. TLA provided two rounds of funding via its Asset Development Program to help Dr. Banerjee and his team put together the first prototype.

Using a life-size model of a colon as the “test bed” and having trained physicians use the system, detection rates leapt from 59 percent using a standard colonoscope to 90 percent using the dual-view imaging probe. A second improved prototype funded by the National Cancer Institute increased average polyp detection from 59 percent with the standard scope to 98 percent.

“That’s when I knew that this must find a way to market,” Phillips said, “and Omniscient is well-positioned to make that happen." 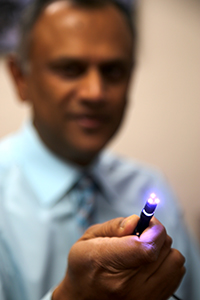 “The funds from TLA, along with a contribution from a private research grant were very useful at an early stage because they helped demonstrate the proof of concept,” said Dr. Banerjee.

According to him, success is not just about the technology—it’s about having the right team of experts and advisors.

“It can be a bumpy ride and things don’t always go to plan,” Dr. Banerjee said. “But when you have the right people on board you learn valuable lessons and keep moving forwards. I’ve had a very good experience working with TLA. Omniscient has continued to grow and now includes experts and partners in technology, regulatory, marketing, business strategy and finance. I know help is available from Tech Launch if I need it.”

This article also was posted by UA Communications at: https://uanews.arizona.edu/story/startup-licenses-dualview-probe-endoscopy