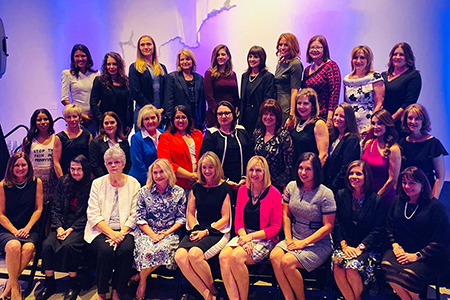 In all, 35 women received awards (see list below) in several different categories at the presentation ceremony hosted at the Phoenix Museum of Art. Click image at right to enlarge – Frost is third from left in the middle row.

These are women, the Arizona Capitol Times noted, who excel in their professions and work every day to advance their company, firm or community, and in doing so, make a difference in the lives of Arizonans.

In September 2018, Banner Health named Frost, then interim CEO of Banner – UMC Tucson and South, as permanent CEO of the medical centers. She had held various positions in both hospitals over the prior 14 years.

Before her hospital career, Frost worked for Pima County for five years as a business analyst with a focus on health-care operations at the county’s skilled nursing facility and at Kino Community Hospital, now Banner – UMC South. 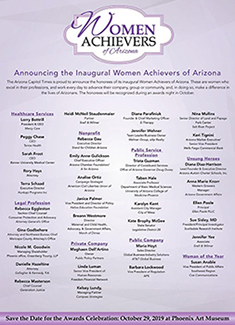 She holds a bachelor’s degree as well as a master’s degree in business administration (MBA) from the University of Arizona She also was selected as a Tucson 40 Under 40 Award winner and is a graduate of the Greater Tucson Leadership Program.

As Banner’s chief hospital executive in Tucson, Frost helped preside over the much-anticipated opening in April 2019 of a $443-million, nine-story tower to replace the 48-year-old sections of the original University Hospital. The two nonprofit medical centers she oversees employ nearly 4,000 workers, making Banner – UMC among the largest employers in Pima County.

The Arizona Capitol Times is a non-partisan, weekly newspaper covering state politics and government published on Fridays in Phoenix, Ariz. The paper focuses on the Arizona Legislature, the state's politicians, government agencies and elected leadership. For the full list of 2019 Women Achievers of Arizona, click on the image at left to enlarge.