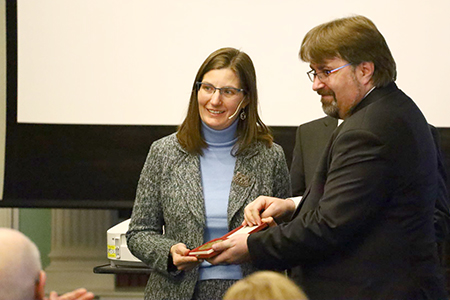 Geneticist Christina Laukaitis, MD, PhD, a University of Arizona associate professor with the Department of Medicine, was recognized with the Mendel Medal by the Mendelianum from the Moravian Museum of Brno, Czech Republic, for her “contribution to the propagation of Gregor Mendel’s scientific legacy.”

The award was presented on March 8 in London at the Royal Institution, an independent charity dedicated to connecting people with the world of science. Dr. Laukaitis gave a talk afterward to the gathered assembly.

At right, Dr. Laukaitis presented with the Mendel Medal from Dr. Jiří Sekerák, head of the Mendelianum at the Moravian Museum in Brno, Czech Republic. 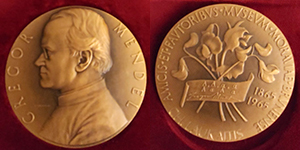 who is considered the father of genetics. Mendel, through his work on pea plants, discovered the fundamental laws of inheritance. He deduced that genes come in pairs and are inherited as distinct units, one from each parent.

“Each year, a number of places around the world (including Tucson) celebrate Mendel Day on March 8,” Dr. Laukaitis said. “This year’s event centered around the British Genetic Society’s Centenary Celebration, so the (Mendelianum Mendel Medal) presentation was held in Great Britain. The head of the Moravian Museum (Jiří Mitáček, PhD), the head of the Mendelianum (Jiří Sekerák, PhD), and the scientist (Eva Matalová, PhD) who raised €10 million to build the museum flew to London to give the award.” 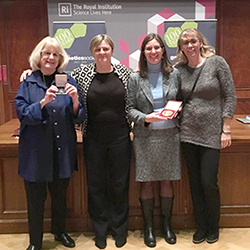 There were about 60 people there for the medal presentation (including the past three Mendelianum Mendel Medal winners from Austria and the United States) and her talk, and about 150 for a talk given later that evening by Mary Claire King, PhD, the American Cancer Society Professor of Genome Sciences and of Medical Genetics in the Department of Medicine at the University of Washington in Seattle. Dr. King received the British Genetic Society’s Mendel Medal that evening.

“I was honored to be recognized, and especially honored to share the stage with such distinguished women on International Women’s Day,” Dr. Laukaitis said.

Along with the UA’s Robert C. Karn, PhD, and Keith Maggert, PhD, Dr. Laukaitis has organized and supported a Mendel Day celebration at the UA Health Sciences for the past four years—including hosting a website: www.mendelday.com 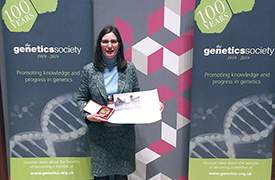 Dr. Laukaitis’ research has focused on genetic and environmental risk factors that predispose individuals to cancer in order to treat neoplasia before cancer develops with an emphasis on people at high risk for breast and other cancers due to mutations in BRCA1, BRCA2, APC and mismatch repair genes. In her lab, they seek explanations for high-risk families without identified mutations. She has experience working with WBF and UDCA sample genotyping and interpreting genetic data that influences cancer risk. In addition to this research, she won an $800,000 grant in late 2016 from the Wallace Research Foundation to study the genetic basis of the joint hypermobility type of Ehlers-Danlos Syndrome, a group of inherited disorders that mostly affect the skin, joints and blood vessels. With research partners from the Division of Rheumatology, she has since received two additional smaller grants related to that research.

Among other honors and recognitions, Dr. Laukaitis was a member of the COM-T Learning to Lead Faculty Leadership Program (2014-15), named Researcher of the Year by the Arizona Chapter of the American College of Physicians (2013), among the Arizona Daily Star's “40 under 40” up-and-coming professionals (2011), winner of the Yellen Distinguished Young Investigator Award at the UA Cancer Center (2011), and chosen to participate in the Alliance for Academic Internal Medicine’s T. Franklin Williams Scholars Program in Washington, DC (2011). In addition, she was a visiting researcher at Oxford University and winner of the American Medical Women’s Association’s Janet M. Glasgow Award (Summer 2003).

She has served on multiple committees related to genetic, genomic, molecular and precision medicine research at the UA College of Medicine, UA Health Sciences and the broader UA campus. She, currently, is a member of the college’s Multidisciplinary Endocrine Tumor Board and MD/PhD Program Admissions Committee, organizer of the college’s Genetics & Genomics Grand Rounds, and an ad hoc member of the UA Cancer Center’s Scientific Review Committee. And she has contributed to several scholarly book chapters and monographs and authored or co-authored more than 30 refereed journal articles and 28 abstracts.