Family Caregiver Day at the Capitol, March 21, Offers Opportunity to Advocate for Elderly 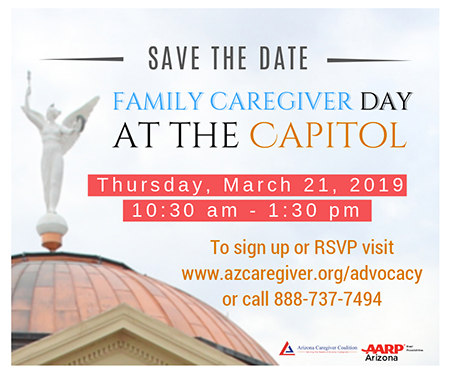 The Fourth Annual Family Caregiver Day at the Capitol in Phoenix on Thursday, March 21, 10:30 a.m.-1:30 p.m., will include at least one indirect representative of the University of Arizona.

Lisa M. O'Neill, DBH, MPH, an assistant professor of medicine in the Division of Geriatrics, General Internal Medicine and Palliative Medicine, manager of the Arizona Geriatrics Workforce Enhancement Program (AzGWEP) and associate director of research and education for the UA Center on Aging, will be going as chair of the Governor’s Advisory Council on Aging.

“Family caregivers provide nearly $10 billion a year in unpaid care,” Dr. O’Neill said. “This important event will encourage family caregivers to become self-advocates and allow them the opportunity to share their concerns and needs with our state’s policy makers.”

Another is new State Sen. Heather Carter, EdD (R.-Cave Creek), who is an associate professor in the UA Mel and Enid Zuckerman College of Public Health and associate director of the Arizona Center for Rural Health. She served in the Arizona House for eight years before moving to the Senate in January.

Another person likely to be there is Rosemary Browne, MD, an associate professor in the UA Geriatrics division and medical director of the Home-Based Primary Care Program at the Southern Arizona VA Health Care System. Dr. Browne also is president-elect of the Arizona Geriatrics Society.

Both Drs. Carter and O’Neill are on the agenda to speak at the event, which is hosted by the Arizona Caregiver Coalition and AARP Arizona. It takes place in the Executive Tower of the Arizona Capitol Museum, Second Floor, Room 200, 1700 W. Washington St.

Goals for the event include:

A complimentary lunch is provided, but seating is limited.

* Named in honor of the late founder of the Arizona Caregiver Coalition, the 2019 winners of the award were previously announced as:

EXTRA INFO: How Many Caregivers in the U.S.?

And this from a January 2018 article in The New Republic, “The Grandparenting Generation”: