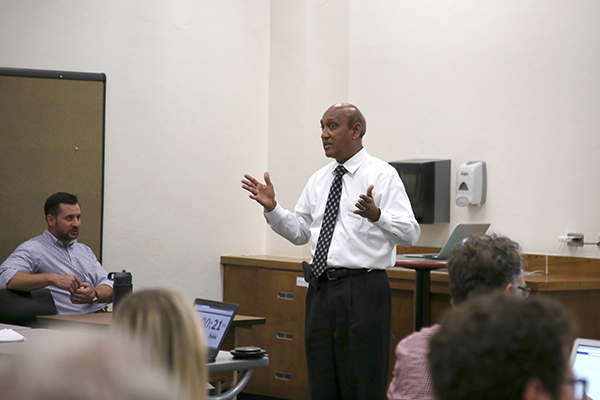 Professor of medicine and Phase 1 Program Director at the University of Arizona Cancer Center Daruka Mahadevan, MD, PhD, has been recognized as a Senior Member of the National Academy of Inventors (NAI).

A non-profit organization dedicated to encouraging inventors in academia, it’s modeled on the National Academies. Starting in 2012, two years after its founding at the University of South Florida, the NAI has inducted 757 fellows as well as 116 senior members into the organization, including 54 new senior members this year.

“I am honored and humbled to receive this prestigious award from the National Academy of Inventors,” Dr. Mahadavan said. “A passion for new knowledge in the quest to conquer cancer is steeped in drug discovery, whether it be small molecule inhibitors or therapeutic monoclonal antibodies. Cancer patients and my collaborators have inspired me to keep educated in research and move the needle of innovation.”

The NAI Senior Member program is an exclusive award distinction reserved for NAI Member Institutions like the University of Arizona. Senior Members are active faculty, scientists and administrators with success in patents, licensing and commercialization and have produced technologies that have brought, or aspire to bring, real impact on the welfare of society. They also foster a spirit of innovation within their communities through enhancing an inventive atmosphere at their institutions, while educating and mentoring the next generation of inventors.

“Dr. Mahadevan is certainly one of the stars of the University of Arizona,” said Tech Launch Arizona Assistant Vice President Doug Hockstad in his letter of nomination, “and his prolific and innovative research, inclusive of the manner in which he has conducted his work and collaborative relationships over the years, are well deserving of such an honor.”

Dr. Mahadevan graduated with honors from the University of Reading in 1982 with a degree in physiology and biochemistry and a minor in chemistry. A brief three years later he completed his PhD in crystallography at the University of London where he solved the crystal structure of eye lens betaBp-crystallin, a discovery that was published in Nature. After an internship in general medicine and surgery in London, he was awarded a Fogarty International Fellowship at the NCI/NIH in the Laboratory of Molecular and Cellular Biology. Subsequently, he completed a residency in internal medicine at the University of Connecticut and was board certified in internal medicine in 1998.

Throughout his careers, Dr. Mahadevan has moved seamlessly between the clinic, lab research and industry, which has allowed him to maximize the impact of his work. In 1998, he joined Celltech Therapeutics in the U.K. where he cloned and humanized monoclonal antibodies, one of which was nominated as a candidate for inflammatory bowel disease. Two years later, he joined the University of Arizona Cancer Center as a fellow in Hematology/Oncology, where he became board certified in medical oncology in 2003. At the UA Cancer Center, he discovered and designed a multi-targeted tyrosine kinase inhibitor, Amuvatinib (MP470), which has been tested in Phase I and II trials in solid tumor oncology. Now, as a full tenured and endowed professor, his lab has discovered several small molecule inhibitors to kinases and a therapeutic monoclonal antibody targeting cancer proteins, specifically for pancreatic and hematologic malignancies.

A Commitment to Impactful Research and Innovation

As of today, Dr. Mahadevan has four families of patents to his name that include nine individual patents. That intellectual property has been licensed to both pre-existing companies as well as startups that he launched. He has a demonstrated commitment to creating collaborative university-industry relationships to generate products and therapies for public use. For example, he has successfully directed a translational drug discovery laboratory program that resulted in several US patents and new drugs for pancreatic and epithelial cancers. His startup, Targeted Cancer Therapeutics, LLC, licensed the anti-CEACAM6 monoclonal antibody and NPM1 inhibitor and is working diligently to bring it to the market, pursuing clinical trials while simultaneously developing relationships with venture capital investors.

Dedicated to ensuring the next generation of innovators, Dr. Mahadevan has mentored many early career scientists and clinicians, instilling in them a passion for drug discovery and a dedication to collaboration. He constantly consults with biologists and medicinal chemists to move discoveries forward, and intentionally creates opportunities for his mentees to develop their skills, participate in the laboratory and the clinic, and share in co-authoring manuscripts.

When asked what continues to motivate him going forward, his focus continues to be on scientific discovery and solving real-world problems for patients.

“I look forward,” he said, “to continuing my drug discovery efforts to target pancreatic cancer and cancers with unmet therapeutic needs such as rare tumors and aggressive B-/T-cell lymphomas.”