Five University of Arizona students who work in the lab of

Louise Hecker, PhD, a researcher with the UA Division of Pulmonary, Allergy, Critical Care and Sleep Medicine, are the founding members who now make up the newest chapter of the Beta Beta Beta (TriBeta) Biological Honor Society.

The Epsilon Chi Lambda Chapter at the UA, with Dr. Hecker as faculty advisor, was officially inducted at the University of Arizona on March 27 by the TriBeta National Biological Honor Society. 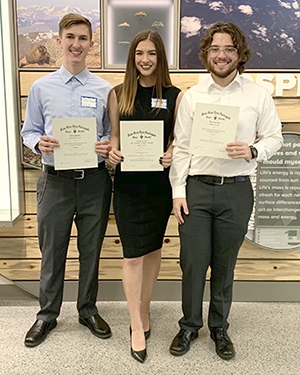 A few days later, three of the undergraduates from Dr. Hecker’s lab at the UA BIO5 Institute who were initiated into the chapter, Joseph Irish, Skye Rounseville and Sydney Rummel (pictured right to left, below), competed at their first TriBeta District Convention, hosted at Colorado State University in Fort Collins, Colo.

Rounseville, a sophomore molecular and cellular biology student, and Irish, a junior chemistry student, placed second and third in the oral presentation competition.

As such, they will advance to the finals at the biennial TriBeta National Convention in May 2020. Both are from Tucson.

All three students (Irish, Rounesville and Rummel — a sophomore physiology student from Paradise Valley, Ariz.) won a first place Travel Gavel Award presented to the chapter that traveled the farthest to attend the conference.

EXTRA INFO: Joining TriBeta at the University of Arizona

and graduate students with a strong interest in the biological sciences, regardless of their major.

For additional details on the biological honor society, membership requirements and how to apply visit: https://heckerlab.arizona.edu/tribeta-0 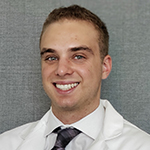 Absent from the competition were Adam Knox (right), another Tucsonan and a first year UA medical student, as well as a key member, Stefan Koester (below left), who worked closely with Dr. Hecker and contributed significantly to launching the local chapter—a process that took over a year to complete.

“I want to make sure Stefan gets credit for his role in helping to initiate the chapter,” Dr. Hecker said. “He was absolutely instrumental in getting the application completed, hosting the site visit and, ultimately, getting the chapter set up here. He is also the president of our TriBeta chapter this year. Unfortunately, he wasn’t able to attend the regional conference due to a conflict.” 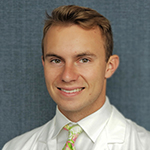 Instead, Koester, a junior physiology student from Scottsdale, was at a cardiology conference, the Scottsdale Interventional Forum (SIF2019). The cardiology connection is due to another of his mentors, Kwan Lee, MD, associate chief of the UA Division of Cardiology, UA Sarver Heart Center member and director of the cardiac catheterization laboratory and cardiology clinic at Banner – University Medical Center South. Dr. Lee said he met Koester when he was in high school.

While at Scottsdale’s Chaparral High School, Koester launched a company, Wireless Health Technologies, to develop an app for smart devices to improve CPR training and outcomes. Among the app’s features, for instance, it buzzes your smart watch when you should give a compression. He’s tweaking the app now as part of work he just started with Sarver’s REACT (Resuscitation Education and CPR Training) student group that does community outreach and training.

Koester’s association with Dr. Lee has since included him also working in Dr. Lee’s lab and presenting on the research via abstracts and posters at national conferences.

“I was immediately struck by his maturity, focus and drive. He has lived up to this initial promise and has since exceeded all expectations. It has been an honor and privilege to have had an opportunity to mentor him as he is clearly a rising star and future leader in health care,” Dr. Lee said.

Under the mentorship of Dr. Hecker, Koester’s independent research project involves screening of novel drug candidates that target the protein Nox4 for treatment of idiopathic pulmonary fibrosis (IPF), a type of lung disease that results in progressive scarring (or fibrosis) that eventually leads to respiratory failure.

Dr. Hecker said she is proud of Koester’s contribution to the progress made in her lab toward developing a workable therapy to potentially halt and reverse that progression.

“Stefan has worked in my lab for three years and received grant funding and awards for his work,” she said. “We’ve come a long way together.”

A Bridge to Future Careers

Among the benefits of being a TriBeta member is the opportunity to get published, Koester said.

“TriBeta has a research journal, BIOS, which exclusively publishes undergraduate research articles. I thought this would be a really good forum to submit and ultimately publish my undergraduate thesis research findings.”

In addition, TriBeta offers excellent opportunities to network with likeminded individuals, gain additional experience, compete as well as share your work with the public.

Thus, the organization serves as a bridge for biological sciences students to research and/or medical careers, said Koester, who’ll graduate a year early this spring.

Next steps on his personal journey include a neurosurgery summer research internship at the Mayo Clinic Scottsdale and, then, it’s on to England to earn a master’s degree in management at the London Business School. Afterward, he hopes to attend medical school.

And Koester now has one paper under review for publication and two more in preparation with his colleagues and mentor in Dr. Hecker’s lab.

Dr. Hecker said she recalled winning two national awards through TriBeta when she was an undergrad at Hartwick College in Oneonta, N.Y. It certainly encouraged her to continue her studies.

“It was an amazing experience,” she said. “The plaque is still hanging in my office!”

That led to a career where Dr. Hecker has won multiple federal funding awards for her research into genetic biomarkers of fibrotic diseases such as IPF. On April 1, UA President Robert C. Robbins, MD, presented her with Tech Launch Arizona’s Inventor of the Year Award at its I-Squared Awards & Expo for discovery of small-molecule inhibitors as a therapy for the lung disease.

Now, she’s hoping to encourage other UA students to embark on a similar career trajectory through TriBeta. The TriBeta Epsilon Chi Lambda Chapter is now accepting applications for membership through its new webpage, a tab off of her lab’s website. See “EXTRA INFO” above or click here to learn more.

About the TriBeta Biological Honor Society

Beta Beta Beta (TriBeta) is an honor society for students, particularly undergraduates, dedicated to improving the understanding and appreciation of biological study and extending boundaries of human knowledge through scientific research. Since its founding nearly a century ago, more than 200,000 persons have been accepted into lifetime membership, and more than 625 chapters have been established throughout the United States and Puerto Rico.

TriBeta was founded in 1922 at Oklahoma City University — the Alpha Chapter — by Dr. Frank G. Brooks and a group of his students. The idea of an honor and professional society for biology students spread rapidly and by 1925, the society was a national organization. Biennial national conventions of student and faculty members began in that year and in 1930 the society journal, BIOS, began publication of student research, articles of interest to biologists and society news. As the society grew, it was divided into regional and district groups, each of which holds a convention annually. At the heart of every district and national meeting are student research papers presented in the style of graduate meetings. Awards are given for outstanding individual and chapter accomplishment.