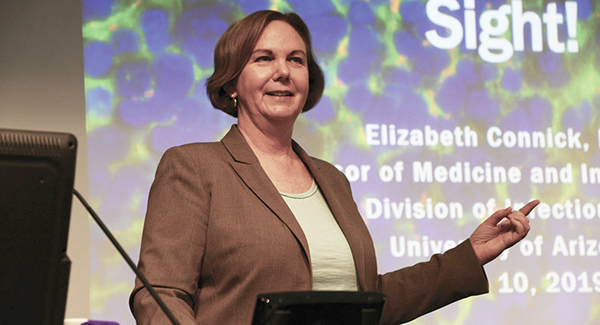 Elizabeth Connick, MD, professor, chief and fellowship program director of the Division of Infectious Diseases in the Department of Medicine at the University of Arizona College of Medicine – Tucson, was presented with the 2020 Constance B. Wofsy Women’s Health Award at the AIDS Clinical Trials Group (ACTG) virtual awards ceremony in November.

Funded by the National Institutes of Health, the ACTG conducts a wide range of studies for people living with HIV, as the largest network of expert clinical and translational investigators and therapeutic clinical trials units in the world.

Dr. Wofsy was founding chair of the ACTG Women’s Health Committee – a post Dr. Connick now holds, co-founder of the AIDS treatment program at San Francisco General Hospital in 1983 and a University of California San Francisco faculty member. She died of breast cancer at age 53 in 1996. 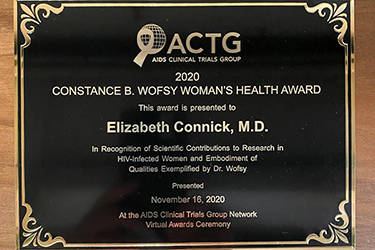 The ACTG’S Wofsy Women’s Health Award was established in her honor in 1997, to be given annually to someone who exemplifies her mission of mentoring junior investigators, caring for HIV positive women and doing research related to the care of women and girls infected with HIV.

Dr. Connick said of the award, “It is the greatest honor of my life. Constance Wofsy was an amazing person. She was one of those people who jumped in to treat people with AIDS very early in the epidemic in San Francisco and one of the first to recognize that HIV affected women.” Interestingly, a younger Dr. Connick interviewed at UCSF with Dr. Wofsy for an infectious diseases fellowship. She didn't go there, but got good career advice, she said.

Dr. Connick, who joined the University of Arizona faculty in 2016, is an immunologist best known for her work studying lymphoid tissues. “There’s an area in the lymphoid tissue where most HIV replication is concentrated. We found that the CD8 killer T cells don’t penetrate that area well – it is a semi-immune privileged site that may be one of the barriers to controlling HIV infection,” Dr. Connick said. Dr. Connick also has investigated sex differences in HIV replication in secondary lymphoid tissues, and discovered that women had fewer virus-producing cells in their lymphoid tissues than men.

In addition, she has played a key role in clinical research on women living with HIV. She was senior author on a study that demonstrated that female sex, black race, and residence in the South were associated with HIV disease progression – underscoring the fact that social inequities rather than just biological differences play a key role in HIV-related morbidity and mortality. She has been a staunch advocate as well for improving inclusion of women in HIV clinical trials.

Even today, despite NIH rules and Food and Drug Administration regulations, women still are sometimes left out of clinical trials. “The most egregious recent example of this,” according to Dr. Connick, “was Gilead’s trial of the antiviral drugs emtricitabine/tenofovir alafenamide for pre-exposure prophylaxis (PrEP) to prevent HIV infection that excluded women. As a consequence the FDA approved the drug for PrEP only for men in 2019. People in the field were extremely disturbed that Gilead had excluded women, thereby preventing their access to a much needed therapy.”

Dr. Connick has served on multiple national committees related to HIV care and research including as chair of the NIH’s AIDS Immunology and Pathogenesis study section, as a member of the Office of AIDS Research Advisory Council at the NIH, and a member of the FDA’s Antiviral Drug Advisory Committee. Her laboratory has received sustained NIH funding for the past 22 years.

Dr. Connick also is a fellow of the Infectious Diseases Society of America and scientific advisory board member of the WRI – Women’s Research Initiative on HIV/AIDS, which is funded by the Well Project whose mission is to change the course of the HIV/AIDS pandemic through a unique and comprehensive focus on women and girls.

She also serves on multiple editorial boards including for the Journal of AIDS, Healio Infectious Disease News and Journal of the International AIDS Society.

Dr. Connick earned her medical degree from Harvard Medical School, did her residency training at New York City’s Columbia Presbyterian Hospital and her fellowship training in infectious diseases at the University of Colorado Denver, where she was on the faculty for more than two decades before coming to the University of Arizona.

Dr. Connick said she was drawn to Tucson in part due to the robust HIV/AIDS clinical care program offered through the UArizona Petersen HIV Clinics, now in their fourth decade. She credited the clinics’ medical director and prior division chief Stephen Klotz, MD, and Lori Fantry, MD, MPH, HIV translational research director and medical director of the Arizona AIDS Education and Training Center (AETC), along with the clinics’ staff, with having continued that tradition. The Petersen HIV Clinics and Arizona AETC were awarded the Peter Likins Program Inclusive Excellence Awards this past summer by the University of Arizona Office of Diversity and Inclusion. Both are federally funded through the Health Resources and Services Administration, a unit of the U.S. Department of Health and Human Services.