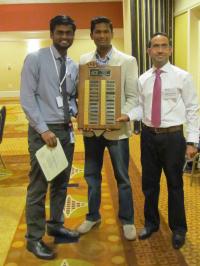 Next, the resident-physicians will represent the UA and the state of Arizona at the national ACP Internal Medicine Meeting, May 5-7, 2016, in Washington, D.C.

“I think this tells people something about the level of the residents in the South Campus program, which has been in existence for only the past several years,” said Bujji Ainapurapu, MD, South Campus IM Residency Program associate director and an assistant professor of medicine at the UA College of Medicine – Tucson. “How they’re performing is amazing. It’s the first time, to my knowledge, a single program has won all these categories. This was achieved with the support of the UA Graduate Medical Education Office and our faculty.”

Dr. Ainapurapu, known as “Dr. A,” noted the Doctor’s Dilemma™ Medical Student Round — a contest with a “Jeopardy!” gameshow format in which responses have to be in the form of a question — and the Oral Clinical Vignette competition, which involves a 9-minute case presentation, followed by 2 minutes of questions, are the most watched events at the meeting.

Taking the top Doctor’s Dilemma™ prize was the South Campus IM team of Balaji Natarajan, MBBS, a first-year resident (PGY-1), Senthil Anand, MD, and Muhammad Husnain, MBBS, both second-year residents (PGY-2). With nine teams competing, the contest had three rounds, with winners progressing to the next round.

A high point, Dr. Husnain said, was “when one of my colleagues, Senthil, gave a very good reply for the gene for pulmonary hypertension. He was the only one who knew. The whole audience was very excited when he provided the answer — BMPR2.” Dr. Husnain is originally from Pakistan, where he graduated from King Edward Medical University in Lahore, and plans to go into cardiology. 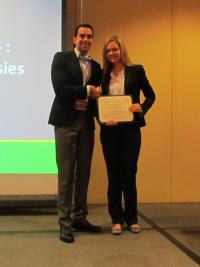 UA PGY-2 IM resident Jessica August, MD, won the Oral Clinical Vignette competition. Her case involved someone acquiring an infection from Borrelia hermsii. She said the tick-born condition usually causes relapsing fever but, in this particular case, was the first instance of a finding called neuroretinitis, which also involved a central vision deficit with headaches.

“It was my first time presenting at ACP and it went really well,” said Dr. August, who is from Northern California and hopes to specialize in infectious diseases. “I had a lot of help from my program director, Dr. Eugene Trowers, associate program director, Dr. A, and chief resident, Dr. Jennifer Huang-Tsang, who gave me a lot of prep work so I really felt comfortable.” 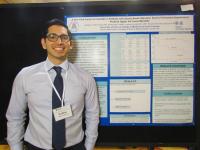 Also first was Sridhar Reddy, MD, a PGY-3 from San Diego, who won for best Research Poster for his theme, “A New Risk Factor to Consider in Patients with Severe Aortic Stenosis: Severe Pulmonary Hypertension Predicts Higher All Cause Mortality.”

In regard to winning, he said, “It was an honor. It felt very rewarding. It’s nice to represent the program in a positive way and it makes me excited to do more research.”

Other results from the competition include:

Laura Meinke, MD, UA assistant professor of medicine and University Campus IM Residency Program director, said a total of 36 posters were accepted from UA residents or medical students at the recent ACP Arizona meeting. She lauded all the UA participants for their achievements.

“Our University Campus Doctor’s Dilemma team unfortunately did not ‘three-peat,’ having won the previous two years, but came in second to a very strong team at South Campus — so we kept the award in our system for the third year running. Congrats to the South Campus team!” Dr. Meinke said.

Eric P. Gall, MD, UA professor of medicine, former chief of the Division of Rheumatology and co-founder of the UA Arthritis Center, was the ACP program chair for the statewide meeting.

“Obviously, I wanted it to be an exciting time for everyone and I think all the teams did outstandingly well,” Dr. Gall said. “Last year, it seemed the UA main campus took away several of the honors. This year, the South Campus kind of swept them. I was very pleased and proud to be part of the University of Arizona and ACP.”