A couple of weeks ago, I was rounding in the South Campus Intensive Care Unit where we had a patient with ACEI-induced angioedema. The gentleman developed facial swelling shortly after starting an ACE inhibitor (ACEI) that was prescribed for hypertension. It was his first-ever episode, there was no family history and he was improving with conservative management.

The single greatest impediment to error prevention in the medical industry is “that we punish people for making mistakes.”
Dr. Lucian Leape
Harvard School of Public Health
Testimony before Congress on Health Care Quality Improvement

END_OF_DOCUMENT_TOKEN_TO_BE_REPLACED
Quality & Safety: Had a patient with C. diff. lately? 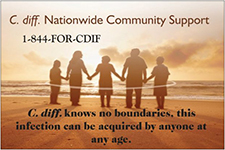 C. diff. infections are responsible for almost a half million infections and at least 15,000 deaths each year in the United States. In 2015, there were 343 cases at the Banner - UMC Tucson hospital and 62 at Banner - UMC South. They’re triggered by a bacterium, Clostridium difficile or C.

The rates of inflammatory bowel disease (IBD)—i.e., Crohn’s disease (CD) and ulcerative colitis (UC)—in the population have grown over the last several decades. Reasons behind this growth are still being studied but likely involve a combination of genetics, gut bacteria, a dysfunctional immune system, and environmental factors. Increased use of fats and sugars in diets (aka a Western diet) in parts of Europe and Asia where IBD is now more common but was once rare suggests that dietary factors play a role in both CD and UC.

This is the first entry in the University of Arizona Department of Medicine’s Quality and Safety Blog. Part of my mission this year is to build “a safety culture” in the department, both on the academic side and via our clinical partners at Banner – University Medical Center, the Southern Arizona VA Health Care System (SAVHCS) and Tucson Medical Center (TMC). This is to help keep each of us aware of the possibility of medical errors and hospital-acquired conditions. Achieving this mindset is a first step toward error-free health care.