Among UA medical students matching into the UA Internal Medicine Residency Program – Tucson Campus this year were John Dicken (on right in first image and left in second above) and Gilbert Ortega (in middle on right), pictured during Match Day proceedings March 17 in DuVal Auditorium. See more photos at the COM-T Flickr site at this link.

Nearly 50 new interns/residents in the University of Arizona Department of Medicine will begin their training as physicians come July 1, by dint of 2017 Match Day® results announced last Friday, March 17.

By far, the vast majority of incoming residents are from U.S. medical schools, including prestigious programs in the Midwest, South and on the East and West Coasts. Several also come from programs in Brazil, the Caribbean, Iran and Pakistan. 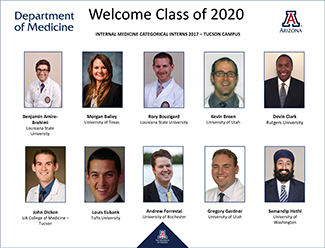 To see photos of incoming interns and residents for the Class of 2020 (and 2019 for dermatology residents),

click here [PDF] or on the image at left.

“In Dermatology, we matched for our largest entering class in the history of the program. Our four residents are graduates of the medicals schools at UCSD, Rush, Northwestern and Tulane. This new class of dermatology residents starts in 2018,” he said.

Of the four who matched into the program this year, one will actually start among this year's residents: Alex Glazer, MD – research fellow, National Society for Cutaneous Medicine (2016-17); internship, University of Chicago-Northshore, transitional (2016); med school: Rush Medical College, Chicago (2015).

With where they’ll do their intern year in 2017-18 and earn their medical degrees, the other three who'll start next year include:

Residents who matched into the program last year, have completed their internships and start this July as 2nd-year residents here are:

These residents will do much of their work at the UA Cancer Center’s Peter and Paula Fasseas Cancer Clinic at 3838 N. Campbell Ave. There are currently eight residents in the UA Dermatology Residency Program.

“We had a great Match,” Internal Medicine Residency Program Director for South Campus Eugene Trower, MD, MPH, a professor and gastroenterologist, said. “We quadrupled our previous number of U.S. allopathic students in the program. Onward and upward!”

A total of 30 residents are in the South Campus program.

The Biggest of the Bunch

At nearly 100 across all three years, those physicians in training in the Internal Medicine Residency – Tucson Campus program make up the largest group of residents across the UA College of Medicine – Tucson. They are roughly twice the number of the next two largest programs, surgery and emergency medicine—which have about 50 residents each.

“We had a great recruitment season here and, with the help of our current residents and faculty, matched a wonderful class for whom we have very high expectations,” she said. “We look forward to welcoming them in July.”

They includes these categorical, three-year residents (with expected degrees they’ll earn this spring):

In addition are the following preliminary residents whose internship in internal medicine is here, along with what degrees they’ll earn this spring (and where they go for residency training next year):

In conclusion, UA Department of Medicine Vice Chair for Education Amy Sussman, MD, a nephrologist and associate professor, added: “We have terrific incoming classes at both campuses (thanks to everyone's recruitment efforts); I think it will undoubtedly be a productive and exciting year!”