immediate past chair of the University of Arizona Department of Medicine and a world leader on research and care of the liver, died on Thursday, Jan. 11, at his home in Tucson after a long battle with cancer.

“It is with a heavy heart I tell you that Thomas David Boyer, MD, our previous Chair of Medicine and a world-renowned leader in the field of hepatology, lost his battle with cancer at the age of 74,” said Monica Kraft, MD, professor of medicine, chair of the UA Department of Medicine since 2014, The Robert and Irene Flinn Endowed Chair of Medicine at the UA College of Medicine – Tucson, and deputy director of the UA Health Sciences Asthma and Airway Disease Research Center. 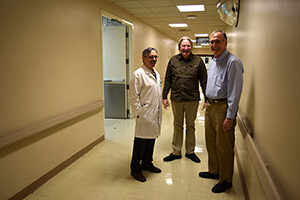 “For those who knew him, they were proud to call him dad, brother, grandpa, friend, colleague, and companion.”

UA College of Medicine – Tucson Dean Charles Cairns, MD, added, "Tom’s contributions to the University of Arizona—and indeed the entire world—are a testament to his dedication to improve the lives of others and he will greatly be missed." 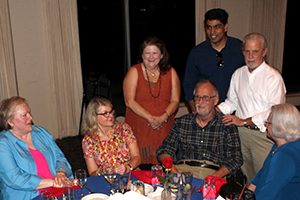 Dr. Boyer with colleagues, including Dr. John Cunningham (standing in white shirt), at his and Dr. Cunningham's retirement party at Skyline Country Club on Aug. 12, 2017. For a photo gallery from the event, click here.

As a foremost expert on disease of the liver, he was internationally renowned for his work in hepatology. His textbook, Zakim and Boyer’s Hepatology (pictured right), now in its seventh edition, is considered the definitive textbook on liver disease worldwide. He also authored hundreds of scholarly articles and was routinely listed among the Best Doctors in America.

Dr. Boyer was a past president of the American Association for the Study of Liver Disease and International Association for the Study of the Liver. Prior to his retirement in July 2017, he was the founding director of the Liver Research Institute at the University of Arizona, which was established when he joined the UA College of Medicine – Tucson faculty in 2000. In his honor, the institute was renamed the Thomas D. Boyer Liver Institute last fall.

Dr. Desai said of him, "When I first started, fresh out of fellowship, he towered over me, a giant in the world of hepatology. I’m grateful to have my life and career touched by Dr. Boyer but know I’m only one in a generation of doctors, trainees, nurses, transplant staff and patients that he impacted."

Dr. Boyer also served multiple roles in the National Institute of Diabetes and Digestive and Kidney Diseases, a unit of the National Institutes of Health which funded much of his research. That research focused on mechanisms of and response to liver cell injury and treatment of complications of cirrhosis and viral hepatitis.

Dr. Boyer graduated from California’s University of Redlands with a bachelor’s degree in biology and earned his medical degree from the University of Southern California, where he completed his residency in internal medicine and a fellowship on liver disease. He also completed a gastroenterology fellowship at  UCSF.

His career was spotlighted in the summer 2015 issue of BizTucson magazine with the article, "Scientist, Educator, Clinician: Dr. Thomas Boyer Targets Liver Diseases." In the article, Steven Goldschmid, MD, a past dean at the UA College of Medicine – Tucson, interim chief of the Division of Gastroenterology and Hepatology and a colleague of Dr. Boyer’s going back to their days at Emory, said Dr. Boyer was a vanishing breed—calling him, “‘the three legged stool,’ that rare combination of superb clinician, great scientist and inspiring educator.” The article goes on to note that Dr. Boyer’s 1971 paper on the case of liver damage in a woman overdosing on Tylenol was one of the first U.S. reports on acetaminophen toxicity—a public health problem that led to warnings being required on acetaminophen labels and packaging. 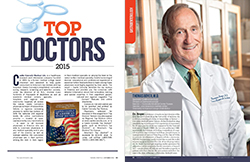 In addition, Dr. Boyer was among UA physicians with a feature story about him in Tucson Lifestyle magazine’s “Top Doctors” issue in September 2015.

It also was Dr. Boyer who launched the Bressler-Alpert Society with a gift of $12,000 in 2012 to fund travel assistance awards for UA Department of Medicine fellows and residents to go present research developed here at academic conferences across the United States. Some 40 trainees in internal medicine have benefited from these awards. A few even have presented in Canada and Europe.

In lieu of flowers, donations are welcomed in honor of Dr. Thomas David Boyer to the following organizations:

“Tom contributed so much to the Department of Medicine and was so welcoming to me when I arrived. I will always appreciate his support,” added Dr. Kraft. “He will be missed by every life he touched.”