Dr. Omavi Bailey, who graduates soon from the UA Sleep Medicine Fellowship, knows a lot about how a good night’s rest or lack thereof affects health and your mental state—particularly for men of African descent. His research explores gene/environment interactions and their link to poor sleep and depression—and ways to counter it.
By David Mogollon | Communications Coordinator, UA Department of Medicine
“We are delighted that this K12 fellowship has provided a great research career growth opportunity for Dr. Omavi Bailey to study circadian rhythms as a basis of approach for remedies to related health disparities,” said Dr. Sai Parthasarathy, interim pulmonary chief, director of the Center for Sleep Disorders and Dr. Bailey’s research mentor.

Omavi Bailey, MD, MPH, set to graduate this month from the University of Arizona Sleep Medicine Fellowship, can tell you a lot about how a good night’s rest or lack thereof affects health and your mental state—particularly for men of African descent.

Dr. Bailey is the first UA Health Sciences fellow to win a K12 Postdoctoral Excellence in Research and Teaching (PERT) Award from the National Institutes of Health (NIH). He’s also the first in his family to earn a medical degree and the first former Family & Community Medicine (F&CM) resident at the UA to go into sleep medicine.

His perspectives are almost as diverse as the life experiences from which he draws them, spanning Sub-Saharan Africa, the Caribbean as well as the United States.

A Quilt of Many Threads 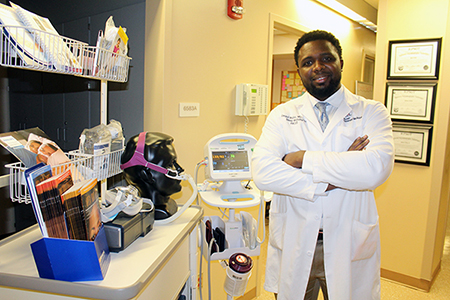 Dr. Bailey’s background is a quilt of many threads. Born and raised in Houston, he earned his bachelor’s degree from Morehouse College in Atlanta, completed a master’s degree in public health at the University of South Florida and got his medical degree from the American International School of Medicine in Georgetown, Guyana, although the majority of his studies were at the Escuela Latinoamericana de Medicina (ELAM) in Havana, Cuba. At ELAM, he did clinical rotations in the United States, Guyana and Africa, where he first went as an undergrad for a semester abroad on developmental studies at Makerere University in Uganda. At that time, he traveled throughout the region, was exposed to traditional healers and stayed two months longer than planned.

Upon his return, he went to a lecture at Morehouse by Erick V.A. Gbodossou, MD, of Benin and founder of the Experimental Center for Traditional Medicine (CEMETRA) and Association of the Promotion of Traditional Medicine (PROMETRA) in Senegal, who became his professional and spiritual mentor and, later, his father-in-law. He has since returned several times, including for research on his master’s thesis in Ghana and, most recently, in January—again, to Ghana—to collect data related to his K12 research on sleep disparities.

END_OF_DOCUMENT_TOKEN_TO_BE_REPLACED

The K12 award is administered by Nicholas Strausfeld, PhD, a Regent’s Professor with the UA Department of Neuroscience and UA BIO5 Institute’s Center for Insect Science, which Dr. Bailey points out is relevant because of Dr. Strausfeld’s research involving fruit flies and circadian rhythms.

“Dr. Omavi Bailey’s entrance into the postdoctoral training program in 2017 pioneered a new era in the PERT program in that it initiated expanded training opportunities that now include medical and biomedical postdocs on the UA Health Science campus,” Dr. Strausfeld said.

“As an active member of the PERT program, Dr. Bailey is now in his second year in the PERT Program and has completed his teaching training in ‘Medical Bioethics’ at Pima Community College, where he was extremely well received by his students.”

Postdoctoral Excellence in Research and Teaching (PERT) fellows at the University of Arizona are a cohesive group representing heterogeneous disciplines ranging from biomedical areas to basic bioscience that includes population biology, parasitology and neuroscience. PERT funding from the National Institute of General Medical Sciences, a unit of the National Institutes of Health, currently supports a cohort of 12 PERT fellows, each receiving mentorship in teacher training at Pima Community College and research training on the UA's main and Heath Sciences campuses. Since the PERT program's establishment in 2000, PERT postdoctoral fellows have published more than 1,000 peer-reviewed articles. PERT offers up to three years of support to outstanding candidates seeking advanced research training and preparation for the additional demands of an academic career. Research areas mainly focus on Insect Science but do not exclude other areas of the biosciences. Each trainee will participate in several PERT program components designed to prepare trainees to be successful in tenure track academic positions.

END_OF_DOCUMENT_TOKEN_TO_BE_REPLACED 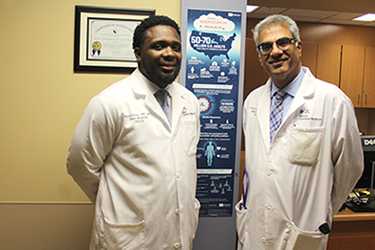 Dr. Bailey’s research involves tracking a single nucleotide polymorphism, or SNP (pronounced “snip”), of an important enzyme in human DNA involved in the synthesis of melatonin that’s known as ASMT (acetylserotonin methyltransferase). The SNP also is strongly associated with depression and is highly prevalent in people of African ancestry. His primary research supervisor is Sairam Parthasarathy, MD (at right on left), a professor of medicine, interim chief, UA Division of Pulmonary, Allergy, Critical Care and Sleep Medicine and director of the UAHS Center for Sleep and Circadian Science and Banner – UMC Tucson Center for Sleep Disorders.

“We are delighted that this K12 fellowship has provided a great research career growth opportunity for Dr. Omavi Bailey to study circadian rhythms as a basis of approach for remedies to related health disparities,” said Dr. Parthasarathy.

Dr. Bailey’s other UA mentors include noted pulmonologist and respiratory physician-scientist Joe G.N. “Skip” Garcia, MD, Michael Grandner, PhD, Sleep Health Research Program director in the UA Department of Psychiatry, and nephrologist Akinlolu Ojo, MD, MPH, PhD, UAHS associate vice president for clinical research and global health initiatives and a principal investigator on the UA/Banner Health All of Us Arizona Research Program as well as the H3 Africa Kidney Disease Research Network. The network is is connected to the Human Heredity & Health in Africa (H3 Africa) Consortium that includes the NIH as a funder and is based in Accra, Ghana, where Dr. Bailey traveled in January to collect data for his work.

“We have joined with Dr. Ojo to collaborate with H3 Africa to get access to this large cohort of patients where we have genetic data collected and sleep data and depression data—all the data there. So, we’re working with H3 Africa to take this data and apply it to our research,” Dr. Bailey said. 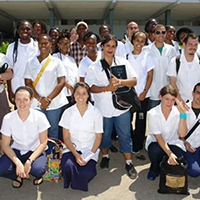 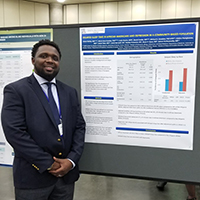 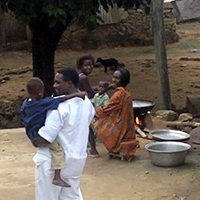 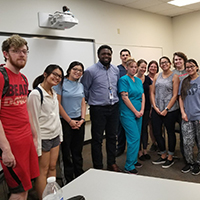 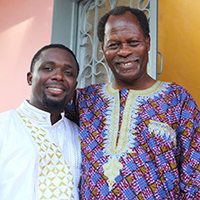 How he got interested in sleep medicine goes back to a narcoleptic dog his mother used to walk for William C. Dement, MD, PhD, while she was a student at Stanford University in the 1960s. Now a practicing psychologist in Houston, she was one of the first “black” students to join the student body there as integration picked up steam. Dr. Dement, whose training was in psychiatry, was the “dorm father” for her dormitory, hired her to work in his lab and served as her mentor. Ironically, Dr. Dement is known as the father of sleep medicine for his pioneering work on narcolepsy.

“So we have this SNP, the SNP is for an enzyme that helps you make melatonin and, if you don’t have enough melatonin, your circadian rhythm is delayed and you end up sleeping later. If you sleep later, but still wake up at the same time to go to work or school, you get shorter sleep duration and that leads to more depression,” he adds. “What cannot be underestimated, however, is the role of the environment and its interaction with this genotype. It’s not that this gene makes you sleep later; it’s the gene in this environment compounded by the psychosocial stressors that leads to depression.”

A paper by Drs. Bailey, Parthasarathy and UA colleagues that’s based on an abstract presented at SLEEP 2018, the 32nd annual meeting of the Associated Professional Sleep Societies, June 2-6 in Baltimore, is now under review by JCSM, a medical journal sponsored by the American Academy of Sleep Medicine. It shows African Americans as two times more likely to suffer delayed sleep, i.e., falling asleep after midnight (regardless of when they went to bed), which leads to shorter sleep duration and is independently associated with greater depression.

Still, he cautions about settling on a strictly genetic basis for those sleep disparities and depression. 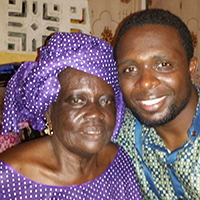 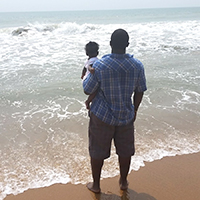 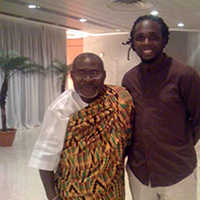 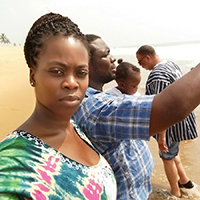 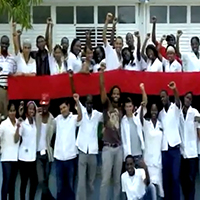 He sees the intersection of primary care, sleep medicine and traditional healing as the crux of his future career choices, but it’s the mystery of it all that captures his imagination.

“My particular interest—and Sai may not agree with this—goes to what we don’t know about sleep. We know very little, really. It’s such a new field. And it’s that mystery that intrigues me. Why do we even need sleep? Why do we dream? Those are questions still unanswered. But we know we can’t live without it. Ancient civilizations have talked and discussed and studied about sleep and dreams and what have you,” Dr. Bailey said.

He describes how, in Cuba, primary care is called “medicina general integrada”—general integrative medicine or “emhay” for how the acronym MGI is pronounced in Spanish. All aspiring physicians are required to start out in primary care by going to a “consultorio,” or clinic responsible for about 100 families, making house calls with each family and developing a “dispensación” or public health plan for that community—and for the rest of their training, they’re tied to that community.

“And it’s very integrated with other health disciplines. That’s what attracted me. We’re not just looking at the heart and the lungs and the brain. We’re looking at the whole body, when it’s sleeping and when it’s awake. If you don’t sleep well, you’re tired all day. A really good sleep doctor knows a lot about neuroscience, a lot about pulmonology, a lot about a lot of things in primary care, because sleep is really a primary care issue.” 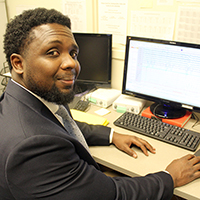 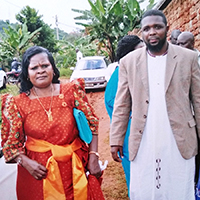 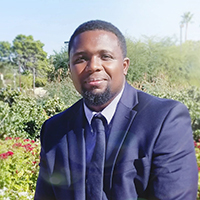 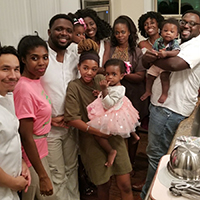 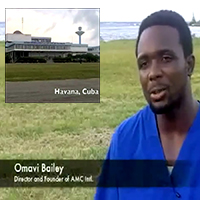 After graduation, he intends to head back to Africa with his wife who is a lawyer born in Senegal and their three kids to continue his research.

“I’m looking forward to really going beyond the bench side and getting back into the community to deliver this information that we know can improve some of these health issues. I want to translate our research into clinical practice in underserved areas,” Dr. Bailey said.

But he harbors no illusions about challenges with the pervasive growth of technology—computers, laptops, tablets, cell phones and smart phones as well as widescreen TVs, 24-hour cable and satellite broadcasting, Internet streaming—on sleep medicine in Africa.

“As that environment continues to change as a result of more development and industrialization and more cellphones and television and poor sleep, you get a social jet lag,” Dr. Bailey said. “Even though you have all this sun, people stay inside all day and you have all this exposure to blue light. Now, your sleep is also just as bad as in America or anywhere else.”

He would like to take what he learns in Africa and apply it to African-Americans to improve health here, too.