KOLD 13/FOX11 with Dr. Sasha Taleban: ‘Ins and Outs of Stomach Ailments Can Be Controlled for More Holiday Cheer’

A broadcast aired earlier this week of Sasha Taleban, MD, director of the Inflammatory Bowel Disease Program at the UA Division of Gastroenterology and Hepatology, talking with KOLD News 13/FOX11’s anchor Craig Thomas on the ins and outs of stomach disorders during the holidays. 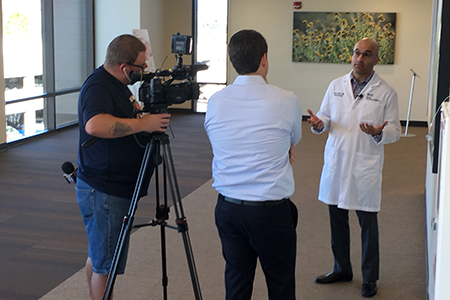 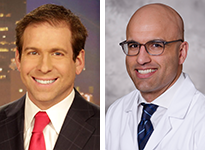 In the story, Dr. Taleban and Thomas, who acknowledges he has suffered from Crohn’s disease for the past 15 years, discuss not only newer treatment options available today to limit and control symptoms—but some of the mental health side effects of the condition. Those include embarrassment, sleeplessness, a lack of physical activity, and social isolation from a reluctance to leave home for exercise, outdoor events, parties and seasonal gatherings. They encouraged sufferers to learn more about care to open up their lives and take advantage of holiday festivities with friends and family.

Crohn’s disease causes inflammation in the lining of a part of your digestive system, mostly the small intestine. Symptoms include stomach aches, bloating, bowel obstruction, cramping, depression, diarrhea, nausea, loss of appetite. The exact cause is unknown, but it has been linked to immune system issues and may be hereditary. Flare ups can be triggered by diet and stress. Both Crohn’s disease and ulcerative colitis belong to a group of diseases known as inflammatory bowel disease (IBD), according to the U.S. Centers for Disease Control and Prevention.

A support group affiliated with the Crohn’s & Colitis Foundation’s local chapter meets the first Tuesday of every month, 7-8 p.m., in Dining Room E off the main cafeteria at Banner – University Medical Center Tucson. For more information, call (332) 999-5518 or email: ccfatucson@gmail.com

Learn more about Crohn’s Disease and colitis at the Crohn’s & Colitis Foundation (also see their video below) or National Institute of Diabetes and Digestive and Kidney Diseases (NIDDK) websites.